Malaysian palm oil: National pride and prejudice through the years 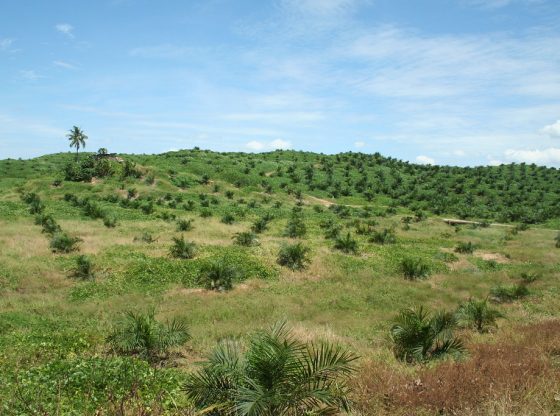 Introduced to then-Malaya from West Africa via the Dutch East Indies in the 1800s, the humble oil palm has come a long way from being merely an ornamental plant. Commercial cultivation of the Elaeis guineensis began on the Tennamaram Estate in Selangor at the turn of the nineteenth century. When rubber prices fell in the twentieth century, shortly after Malaysia gained independence from Britain, many cultivators shifted over to the oil palm and Malaysia quickly become the world’s largest producer of palm oil.

This was no small achievement: palm oil is the most widely consumed vegetable oil in the world. Its mild taste and stability at room temperature has made it suitable for use not only in foodstuffs, but also in non-food products like pharmaceuticals and biofuels. Producing fruit all year round, the oil palm is also the most efficient oil crop, squeezing out more oil per hectare than any other vegetable oil.

This ‘golden crop’ is not without controversy

Coupled with the availability of cheap labour from neighbouring Indonesia, Malaysia has been able to produce this oil not only abundantly, but also cheaply. Even though Indonesia claimed the top producer spot in 2008, Malaysia’s physical, psychological and political landscape remains greatly influenced by this formidable crop.

Enter Malaysia through one of its major airports and you will notice that the greenery surrounding the airfield is curiously uniform and laid out in a neat, grid-like pattern. Upon landing, you will be able to observe trees with bulbous trunks topped with a lush cap of thick ferns. Some will have bright red clusters of fruit hanging just below the fern line. This ‘artificially’ green landscape will likely follow you almost all the way on your drive from the airport to the city.

Indeed, your exposure to the oil palm tree may have begun even earlier when you exchanged your currency for the Malaysian Ringgit. In 2009, to commemorate the tree’s contribution to Malaysia’s economy, the oil palm was immortalised on Malaysia’s RM50 currency note, the country’s second highest denomination. It appears alongside a depiction of the country’s first Prime Minister, Tunku Abdul Rahman, in a proud pose declaring ‘Merdeka!’ (freedom) on Independence Day.

The oil palm has long been depicted as an important driver of economic growth, rural development and national pride in Malaysia. It was recognised as a major factor in Malaysia’s swift post-independence development. In 1997, when the Asian Financial Crisis struck, the then (and current) Prime Minister, Mahathir Mohamad, refused help from the international financial community in part due to confidence that foreign exchange from palm oil exports would help Malaysia ride out the crisis.

This solidified national imaginings of the oil palm as being a ‘golden crop’. Even today, when ranked second, the crop provides Malaysia with at least 5 per cent of its annual GDP, and it has been credited with bringing tens of thousands of rural Malaysians out of poverty. Many of Malaysia’s largest multinationals are involved in oil palm plantations and palm oil processing, both locally and abroad. Consequently, the sector has an almost ‘untouchable’ status at the national level.

However, this ‘golden crop’ is not without controversy. It has been blamed for driving deforestation in Malaysia’s pristine, mega-diverse forests and for chasing charismatic large animals like the orangutan and tiger out of their native habitats. The drying out and clearing of carbon-rich peatlands for oil palm cultivation has increased the frequency of fires and smoke pollution (known locally as haze) and contributed to climate change. Plantations established in native customary rights lands have also been a source of many community conflicts.

It is on these grounds that many environmental, human rights and consumer groups have launched anti-palm oil campaigns, with strategies ranging from boycotts to ‘naming and shaming’ exercises. In response, Malaysia launched two advertising campaigns in the 2000s declaring that Malaysian palm oil was ‘greener’ than other palm oils. When both of these campaigns were banned by the UK due to unsubstantiated claims, Malaysia labelled the move ‘a protectionist agenda hidden under a veneer of environmental concern’, in reference to the UK’s own vegetable oils sector.

At the same time, many international peatland scientists began warning against the use of peatlands for palm oil plantations. After the Roundtable for Sustainable Palm Oil certification scheme took notice and banned planting on peat, Malaysia launched its own certification scheme in 2015 called Malaysian Sustainable Palm Oil to regain national control over certification. These warnings were also loudly discredited by Sarawakian government researchers, claiming that ‘Western’ researchers did not understand Malaysian peat and were unduly influenced by Western NGOs.

However, sustained campaigns in countries across Europe eventually caught the attention of European Union policymakers and last year the EU announced plans to phase out palm oil from its biofuel mix, and to introduce a single Certified Sustainable Palm Oil scheme for all palm oil entering Europe.

Malaysia responded, its metaphorical guns blazing, with full nationalistic fervour. Old wounds were reopened as various ministers proclaimed that this ‘ban’ stank of neo-colonialism along the lines: ‘the Europeans colonised our lands and resources in the past to enrich themselves, and now they are trying to prevent Malaysia from doing the same’.

Malaysia threatened to challenge the move at the WTO. Smallholders were bussed into the capital Kuala Lumpur to protest in front of European embassies, claiming ‘crop apartheid’ and that the ban would disenfranchise them the most. Amidst this, Malaysia proudly celebrated ‘100 Years of Palm Oil’ to much fanfare, and launched a year-long ‘Love MY Palm Oil’ campaign.

Common among these reactions has been Malaysia’s tendency to treat any criticism of palm oil production or its use as a direct attack. Clouded by nationalistic pride, there has been a dearth of introspection and instead an abundance of denial in Malaysia’s response. As a result, the crop’s untouchable status at the national level has caused serious damage to Malaysia’s credibility among (mainly) Western consumers.

While demand from other markets continues to bolster the sector for now, in the long term Malaysia would do well to temper its nationalistic instincts and instead respond more constructively to critique. Indeed, a greener and more sustainable Malaysian palm oil industry would be a win-win situation for all.

Helena Varkkey is a Senior Lecturer in the Department of International and Strategic Studies, University of Malaya. She works on environmental political economy issues in Southeast Asia, with a focus on palm oil and transboundary haze.

*The author would like to acknowledge the financial support provided by University of Malaya under the Equitable Society Research Cluster (ESRC) research grant GC003B-17SBS.

Hong Kong: Neoliberal heaven or neoliberal nightmare?
Taiwan’s confused reaction to the Tiananmen Incident in 1989 and why Lee Teng-hui was right