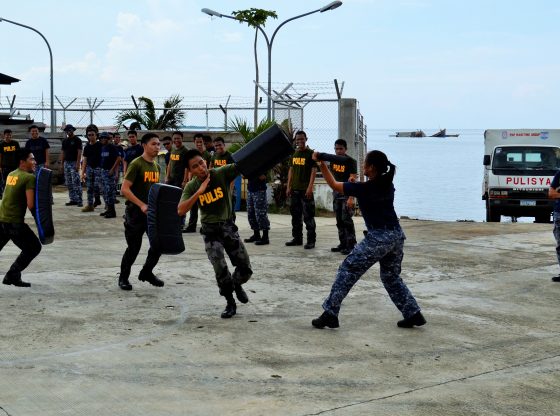 In an article on “Role Conception and Conduct of Duterte’s Security Policy,” I argued that the inward-looking role of government steers the direction of a domestically oriented National Security Policy (NSP) in the Philippines for 2017-2022. President Rodrigo Duterte, in the opening line of his Message in the NSP, referred to the constitutional mandate “to serve and protect the people” in a bid to end all armed conflicts and lawless violence that threaten national survival. Significantly, his policy pronouncement shaped the highly desired conditions of “public safety, law and order, and justice,” which became the first item in the national interests in the NSP.

“To guarantee public safety and good governance,” as the foremost agenda in the 2018 National Security Strategy (NSS), the strategic line of action is to “(m)odernise, professionalise, and synergise the Philippine Armed Forces and the National Police to be capable of combating terrorism, insurgency and subversion, quickly and decisively.” The aspired synergy of the two power strongholds is called in the NSS as the “military and law enforcement” instrument of national power. Another key feature in the fight against criminality includes getting rid of graft and corruption in the bureaucracy and reforming the criminal justice system.

How President Duterte intends to use the military and law enforcement power of the state is central to discussions of strategic options for public safety and security, and also of some epistemic questions that go with those choices.

To continue with the academic discourse on the Philippines’ NSS, which is well in line with my argument on small state security syndrome,  the following research inquiries are worth exploring to stimulate timely conversations on the roles of the police and the military in  national security and democracy.

The Police and the Military in Philippine Security

After the fall of authoritarianism in the Philippines, the democratic government legislated in 1990 a law that created the Philippine National Police (PNP) under the reorganised Department of the Interior and Local Government (DILG). To this effect, the PNP was formed by merging the Integrated National Police (INP) and the Philippine Constabulary (PC). The latter, which was the oldest armed force responsible for internal security in the country, was disbanded from the Armed Forces of the Philippines (AFP) under the Department of National Defense (DND), and converted into a civilian national police with constabulary functions under the DILG. The law further stipulated that the DILG shall take over from the DND the primary responsibility for preserving internal security in two years time, unless extended only for another two years by the President.

But in 1998, an amendment to the DILG law was made through the Reorganization Act of the PNP that reverted to the AFP the lead role to suppress insurgency and other serious threats to national security. In this regard, the PNP shall only support the AFP through information gathering and regular police work, except when the President calls on the PNP to back the AFP in counter-insurgency operations. It must be noted that at the time of the amendment in 1998, the United States (US) military bases in the Philippines had already been closed for seven years, while the AFP struggled to modernise its weak defense capability.

When President Duterte declared war against illegal drugs in 2016, this changed the nature of policing and law enforcement in the country’s public safety and security domain. When he imposed martial law to combat ISIL (Islamic State of Iraq and the Levant) inspired terrorist attacks in Marawi in the southern part of the archipelago in 2017, this shifted some police functions of law and order to military rule. When the Philippine government enacted a law on the use of standardised military ranks for PNP uniformed personnel in February 2019, this converted the otherwise civilian character of the PNP into a paramilitary-like police force. According to this latest act, the rank classification shall be for the purpose of ensuring  command and responsibility, and interoperability between the PNP and the AFP in countering insurgency, terrorism, and other threats to national security.

Meanwhile, the AFP continues to play key role in interior affairs, being an active member of national and sub-national peace and order councils chaired by DILG officials. The community-oriented mindset of the AFP is also evident in its Development Support and Security Plan for 2017-2022. Dubbed as “Kapayapaan” (Peace), the military plan aims to conduct “development support operations” to sustain peace, maintain public order, and promote human security.

For a small state or small power with long-standing internal armed conflicts, the optimal use of state forces is central to national survival. But for a state with weak capacities and institutions, the use of power sources is very challenging to national security administration.

In the case of the Philippines, no less than its NSS noted the strained role and resources of the military in performing multiple functions in internal security. The NSS also wrote that “(c)urrently, the Philippines has difficulty patrolling its vast expanse of water due to lack of equipment and resources stemming mainly from meager border security and defense funding.” On this note, the strategy to optimise standing security forces for public safety and security in the country resulted in overlapping of roles and overloading of functions. How all this will redound to the development and effectiveness of police and military institutions is a key concern in national security policy and strategy.

A Militarised Police or a Civilianised Military?

When the police are militarised to fight terrorism and other existential threats to national security, a paramilitary force emerges. When the armed forces are civilianised to suit the laws of the land in which they operate, the military constables arise. This is particularly true in peace-keeping missions of armed forces abroad, which change the ways of military operations other than war in post-conflict zones. When the police and the military are combined to combat complex threats to national and/or international security, a hybrid gendermarie could be created.

In the Philippines, different administrations used and confused the security institutions with mixed-up roles and functions in internal peace and security. Following the  landmark DILG Act of 1990, the PNP could have developed into a highly efficient and competent constabulary police or civilian paramilitary force to take over internal peace and security functions relegated to the AFP. But for the PNP Reorganization Act of 1998, initial reforms in the security sector would have been realised. As a result, the AFP to this day has not been relieved of public safety functions and so-called development interventions in insurgency-affected communities. While the AFP enjoys the trust and confidence of people in local areas, its development as a defense force at the strategic level has been encumbered by its constabulary role in local governments.

With the PNP now sporting military ranks and the AFP securitising police functions, role performances have become blurred and blended in the domestic security theater. Whether or not this policy issue still matters in borderless security domains is a continuing academic problematic in the research community. Addressing this issue will unravel critical insights on appropriate roles and conduct for the police and the military, especially in different phases of conflict and strategic time-frames.

If the military is to have any strategic value and impact as an option of last resort, it should not be preferred as mainstay actor in peace and development efforts in civilian communities. Theoretically, the continuous presence of the military indicates failure of the civilian public safety regime to keep peace and order in decentralised governments. This assumption is in line with extant academic literature that explains the exigency for public order management by the military in nation-building of other failed or failing states.

Aside from changes in role assignments, emerging security requirements call for new structural arrangements. A key policy concern is where a constabulary force should re-emerge. Strategic initiatives to build up a constabulary force in the PNP, instead of “civilianising” the AFP for public safety governance, could be a best option to make democracy work and deliver its promise of development. Accordingly, this will allow the AFP to transition from internal to external defense, especially in a region where strategic challenges demand specialised skills in military and defense diplomacy. As the Philippines navigates the new security landscape, the recalibration of its defense policy, along with military modernisation, can no longer be set aside.

Ananda Devi Domingo-Almase, DPA is a Professor III at the National Defense College of the Philippines (NDCP) and the Course Director for National Security Policy and Strategy in the Master in National Security Administration (MNSA) Course of NDCP. The views expressed in this article are hers alone and do not reflect the opinion and position of the NDCP nor the Department of National Defense that supervises the College.