The complex socioeconomic impacts of the oil palm expansion in Indonesia 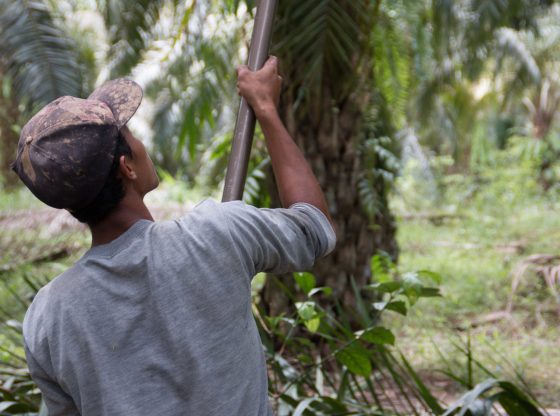 The global demand for palm oil over the last few decades led to land-use changes rarely observed before in agricultural history in terms of speed and magnitude. Global production of palm oil rose by more than 600% between 1990 and 2017. The production growth was highly concentrated in only two countries – Indonesia and Malaysia. In Indonesia, now the largest producer worldwide, the oil palm area increased from only 1 million hectares in 1990 to more than 12 million hectares in 2018.

The link between the expansion of large-scale oil palm plantations and the rapid loss of Indonesia’s rainforests has drawn the attention of researchers, non-governmental organisations and the media alike, who often blame short-sighted economic interests for endangering environmental sustainability at local and global scale. But the socioeconomic background of this ecological crisis is far more complex. Without a careful assessment of the socioeconomic factors behind this expansion, designing effective policies to address forest conservation might prove elusive. In particular three factors are often ignored in discussions on oil palm: first, the role of smallholder farmers, second, the drastic labour market effects of the oil palm boom and lastly the underlying links between the oil palm expansion and deforestation.

Nowadays, around 40 per cent of Indonesia’s oil palm area are cultivated by smallholder farmers.

Besides large-scale oil palm plantations, smallholder farm households also adopted oil palm in large numbers. Nowadays, around 40 per cent of Indonesia’s oil palm area are cultivated by smallholder farmers. These farmers own significantly less land compared to their European or American counterparts, amounting often to little more than four hectares. Landless households in rural areas also derive substantial income from working on oil palm farms and plantations. It is without question that palm oil production is deeply integrated in Indonesia’s economy and sustains millions of livelihoods but if this is for the benefit of all is largely controversial. Scientific studies and public opinion are often rather critical on the potential welfare effects of large-scale plantations due to land conflicts and exploitative labour relations. By contrast, recent studies report substantial welfare gains of oil palm cultivation for smallholder farm households. Farmers’ incomes increased as well as their expenditures on food and non-food items and eventually even nutritional indicators improved. Restricting the global discussion to forest protection and large-scale planation overlooks the crucial role oil palm cultivation plays for these small farmers as well as their particular vulnerability to shifts in global policies.

Recent research showed that the socioeconomic effects of the oil palm boom are not only limited to income gains for small farmers. Detailed analyses showed that in regions with increasing oil palm expansion pronounced shifts in the labour markets occurred. Women retreated from agriculture in large numbers and shifted into the non-agricultural sector while men increased their involvement in agricultural wage labour. These at first sight puzzling shifts in the labour market are driven by a lower labour demand for women in palm oil production. While more traditional crops such as rubber or rice can be cultivated equally well by women and men, oil palm harvesting necessitates considerable physical strength. Fortunately, a widespread unemployment of women did not occur. Oil palm expansion led to rising incomes and a higher demand for non-agricultural products. The growing non-agricultural sector was able to absorb most of the freed female labour from agriculture. Policies which solely focus on oil palm production while ignoring the crucial role of the non-agricultural sector in rural labour markets might lead to unintended effects such as widening gender disparities.

These socioeconomic changes are closely interlinked with environmental degradation as Indonesia’s rainforest is continuously shrinking. But the reasons why oil palm is in particular dangerous to forest conservation compared to other crops or land uses remain somewhat obscure. The fact that oil palm was used by the central government as an instrument for rural development in more remote and also more forested regions surely played a major role. One may also argue that the high profitability of palm oil encouraged the conversion of forest land into agriculture. However, a low-profit agriculture is also unlikely to be an effective instrument for forest protection as even more land has to be taken into cultivation to satisfy basic needs. Socioeconomic studies point to another maybe crucial distinction between oil palm and other competing crops. While the need for less female labour was already mentioned, oil palm cultivation needs also less male labour – although the drop is more severe for women. The low labour intensity per hectare allows farmers to cultivate more land, for example, instead of two hectares of rubber four hectares of oil palm. A closer look at the data shows that the aforementioned income gains of oil palm cultivation are to a considerable part driven by land expansion. Connecting the lower labour intensity in oil palm cultivation to deforestation is not straightforward but a better understanding of the underlying mechanism may help finding adequate instruments to curb deforestation as well as enhance economic well-being. For instance, the development of the non-agricultural sector and a more stringent demarcation of farming and forest land in regions with a growing oil palm sector may prove crucial.

The current debate on oil palm offers a variety of instruments how to address the detrimental effects of the oil palm expansion on our environment. Some may be effective, some not. To evaluate these different approaches, we are often confronted with unsettling little evidence, leaving us often to guess work rather than evidence-based discussions. Although, recent research did make some strides to better understand these complexities, more research is in urgent need.

Dr Christoph Kubitza is a researcher at the University of Goettingen in Germany, working within the Collaborative Research Centre 990: Ecological and Socioeconomic Functions of Tropical Lowland Rainforest Transformation Systems (Sumatra, Indonesia).