Russian Diplomacy: rather a bad peace than a good quarrel 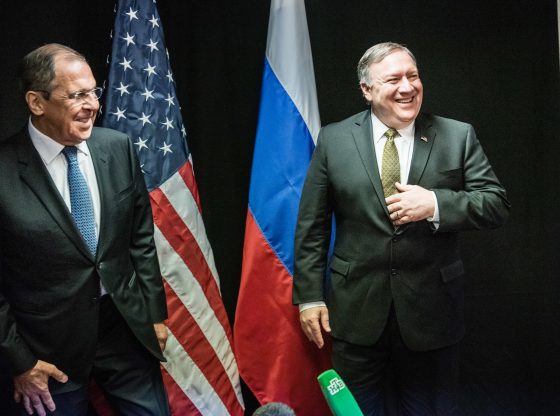 Russia’s aspirations and diplomatic engagements in world affairs are becoming increasingly outspoken: Russia’s Foreign Ministry is intensively undertaking a series of negotiations and meetings at all levels. Just recently, Russia’s Foreign Minister Sergey Lavrov has consecutively hosted his counterparts in Russia. First he met with the Japanese Foreign Minister Taro Kono in Moscow, later with the Chinese Foreign Minister Wang Yi and U.S. Secretary of State Mike Pompeo in Sochi. Following the Lavrov-Pompeo meeting, Putin also greeted U.S. Secretary of State. The meetings between the high ranking diplomats indicate that the state leaders are willing to communicate and find resolutions on the large number of bilateral and multilateral challenges.

Given that diplomacy is historically a practice that is shrouded in secrecy, often operating through backchannels and closed doors, the real assessment of diplomatic outcomes can only be seen and understood through a thorough analysis of relations between countries in a real-time framework. Yet, the visible part of diplomacy should not be overlooked while protocol meetings and press conferences can surely give an impression of the priorities of Russia’s foreign policy and what issues are being discussed, what national interests are promoted, and what kind of solutions are suggested.

Moscow’s aspirations in securing its foreign policy objectives primarily lie in the area of reconciliation and improving relations with Washington.

Regarding the meetings that Russia has recently hosted, there were, of course, common concerns that high ranking diplomats have been negotiating on. Notwithstanding, there were also conflicting interests in bilateral and multilateral relations that could be easily detected. Moscow’s aspirations in securing its foreign policy objectives primarily lie in the area of reconciliation and improving relations with Washington. Further on, Russia’s relations with China appear more stable as Moscow and Beijing express that they reached mutual understanding and are in strategic partnership. With Japan, the main question is of a different calibre and revolves around facilitating dialogue on post-World War II peace treaties. Nevertheless, finding consensus or reaching a satisfying decision for both parties, remains a hard nut to crack.

With the US, the challenges and major disagreements towards world politics revolve around the situation in Venezuela and Syria, as well as around the Iranian deal and the Intermediate-Range Nuclear Forces Treaty from which the U.S. has withdrawn recently. The denuclearisation of North Korea is also the theme for discussion. Russia insists on the denuclearisation of the whole Korean peninsula, whereas the U.S. sticks to the idea of making North Korea nuclear-free. Russia also holds talks on North Korea at a working level of diplomatic negotiations with U.S. State Department’s Director for Korea Policy Mark Lambert and U.S. Special Representative for North Korea Stephen Biegun.

If disagreements with the U.S. over Korea and other global and domestic challenges are visible, the dialogue with China proceeds more smoothly. On North Korea, Lavrov and his counterpart Wang emphasised that easing tensions on the peninsula went well according the road map suggested by Russia and China back in 2017. As previously suggested, the U.S., China, and Russia should work collectively on the denuclearisation strategy in conjunction with security guarantees for Kim Jong-un’s regime. Now that the negotiations over the Korean peninsula have stalled and the summits in Singapore and Hanoi turned out to be a wasted opportunity, it seems that negotiations have reached a dead end. Notably, Lavrov and Japan’s Kono only “exchanged opinions” about the developments on Korea. It’s clear that Japan is omitted from North Korea nuclear talks.

On other issues regarding Asia, Russia is interested in increasing mutual coordination on multilateral platforms within the Shanghai Cooperation Organization, the BRICS, ASEAN, and maintaining trilateral relations in the Russia-India-China and Russia-Mongolia-China formats. Those are key assets of Russia’s foreign policy in Asia and Eurasia, especially in their pursuit of a in partnership with China.

On the background of the trade war with the U.S., Chinese Minister of Foreign Affairs echoed Lavrov in emphasising that multilateral relations are vital for international peace and stability. To condemn the Trump administration for their tariffs, Wang has chosen a very diplomatic formulation, however, as he talked about global responsibility of big countries like the U.S., China, and Russia for the peace and stability in East Asia and – by extension – the whole world. Lavrov seconded Wang saying that great powers’ responsibility is not high-flown rhetoric but a real assessment as only great powers serve the cause of global peace. Such talks also show the direction for a new multipolar world order that would replace the currently existing American hegemony.

The implications of Russian bilateral and multilateral diplomacy are underway and will most definitely impact Asia. Will Russia, through its diplomatic endeavours, become a part of a larger transition towards a new world order or is it still trying to preserve its existing role? Yet, the great powers of the U.S. and China demonstrate that Russia’s leverage in world politics is in a recovery. As for now, Moscow is willing to bury the hatchet with Washington, maintain good relations with Beijing, stay on speaking terms with Japan without necessarily having to come to a mutual understanding over territorial claims. What is important to acknowledge is that Russia is continuously promoting dialogue and strategic partnerships with global powers, despite deep political or strategic disagreements. There is a saying: “A bad peace is better than a good quarrel.” Russian diplomacy is on guard of “a good quarrel” and this notion in world politics should be followed and not taken for granted.

Olga Krasnyak is a Lecturer in International Studies at Yonsei University. She is the author of National styles in science, diplomacy, and science diplomacy (Leiden, Boston: Brill 2018). You can follow her on @OlgaKrasnyak.