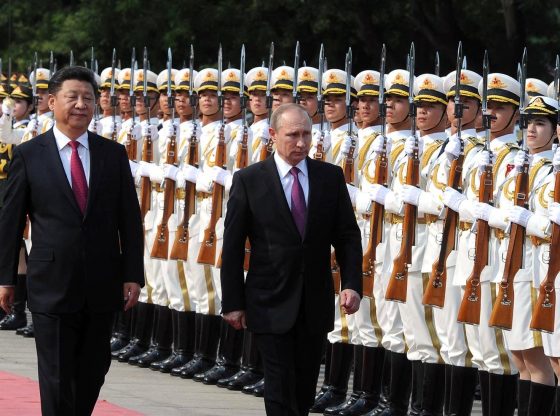 Deteriorating relations between the United States and China and between the United States and Russia have inspired a growing rapprochement between Russia and China. This has been marked by expanding trade relations, joint military exercises, and showy displays of friendship on the part of their leaders. Symbols of mutual goodwill abound. President Xi has visited Moscow more than any other capital. President Putin attended China’s Belt and Road Initiative Summit in Beijing both in 2017 and 2019, where he was treated as a guest of honour. In recent years, China has participated regularly in Russian naval exercises. In September 2018, China sent military forces to participate in a large-scale joint military exercise in Eastern Siberia, called Vostok-2018. Chinese president Xi Jinping has gone to great lengths to advertise his warm feelings for President Vladimir Putin, calling him in June 2018 “my best, my most intimate friend” and bestowing him with an elaborate gold chain representing China’s first ever medal of friendship. President Putin returned the favour, declaring at the Eastern Economic Forum in Vladivostok in September 2018 that “we have a relationship of trust in the sphere of politics, security, and defence.”

The volume of trade relations between Russia and China has risen in recent years, and in 2018 topped $100 billion. China has bailed out the Russian state oil company Rosneft’ in the face of US banking sanctions and the collapse in oil prices in 2008 and is helping to finance Russian natural gas extraction. Undoubtedly, we can expect a further expansion of Chinese imports of Russian oil and gas, with the financing supplied by China’s state banks. Certainly, as the United States has imposed steep tariffs on Chinese goods, and China on US goods, China and Russia have a stronger reason to reach a long-term agreement on the terms for building the second Siberia-China gas pipeline and on a price for gas acceptable to both sides.

Not far below the surface, however, barriers to a deeper strategic partnership are not hard to discern. Trade between the two countries, although growing, is still modest. As a destination for Chinese exports, Russia’s share is about the same as that of the Netherlands; as a source of imports, Russia’s share is below that of Vietnam and Thailand. Many of the grand plans agreed to by presidents Xi and Putin at their summit meetings in 2014 and 2014 have gone unrealized, among them the construction of a high-speed rail link between Moscow and Kazan’ and of a railroad link between China’s Northwest and Russia’s Far East. China’s leaders have concluded that Russia lacks the political capacity to carry out its part of these and many other promised projects, and Russian leaders have been disappointed to learn that China is unwilling to finance them alone. China’s largesse is confined to projects that will enable it to meet is pressing needs for cleaner energy, particularly natural gas. China sets the agenda for the Shanghai Cooperation Organization, making Russia’s status as a member more ceremonial than substantive.

China, moreover, is also expanding its energy and transportation ties with Russia’s immediate neighbours, and not just in Central Asia. China has increased its purchases of military aircraft engines from a former Soviet defence plant in Ukraine; it has built a major industrial park outside Minsk, Belarus; it has purchased a large industrial production zone in Georgia; and is helping finance and build a 5000 kilometer multimodal transportation corridor linking China, Kazakhstan, Azerbaijan, Georgia and Ukraine, including a shipping segment across the Caspian Sea (“the Trans-Caspian International Transport Corridor“). This project will provide China and Russia’s neighbours an alternative route to overland shipping between China and Europe to that provided by Russia’s Trans-Siberian Railroad. For all the professions of enduring friendship with Russia, therefore, China has been rapidly diversifying its investments all around Russia’s southern periphery. Given Russia’s sensitivity to the presence of outside powers in the post-Soviet neighbourhood, China’s ambitions there must be of considerable concern to Russian policymakers.

Moreover, China’s presence in Russia itself has been expanding rapidly.  Chinese online platforms such as Alibaba dominate e-commerce in much of Russia. Chinese labourers, farmers, and shopkeepers are now a major presence in many of Russia’s Far Eastern and Siberian cities.

Russian analysts of China now recognize, as do many Western analysts, that the Belt-and-Road Initiative is less a coherent strategic vision than it is a portmanteau rubric employed opportunistically by many Chinese enterprises and provincial governments to obtain financing for their favoured projects overseas. On the other hand, Russian policymakers are well aware of the rapid growth of China’s financial and commercial presence throughout the former Soviet region. At one time, there were those in Moscow who greeted China’s rise as a great opportunity to form a Russo-Chinese condominium in Eurasia to counter the West. Russia would supply security and law; China would bring the money. Now, it is clear, no one in Moscow harbours any illusions that China regards Russia as a real strategic partner. Xi Jinping has played the traditional Chinese diplomatic cards of ceremony and flattery in his dealings with Putin with consummate skill, while consistently pursuing a multilateral policy in the Eurasian region.  Certainly, the growing self-isolation of the United States under President Trump provides Russia and China with many opportunities to profess their commonality of interests. There have been no moves made on either side, however, toward a deeper commitment to a bilateral strategic partnership.

A retired GRU (Russian military intelligence) general many years ago observed that it was Russia’s destiny to become “China’s strategic rear.”  Nothing in the recent evolution of Russia-Chinese relations suggests he was wrong.

Are Russia and China revisionist states?
What does the fragmentation of the WTO mean for global trade?

Leave a Reply to The Communist Tax Lawyer Cancel reply