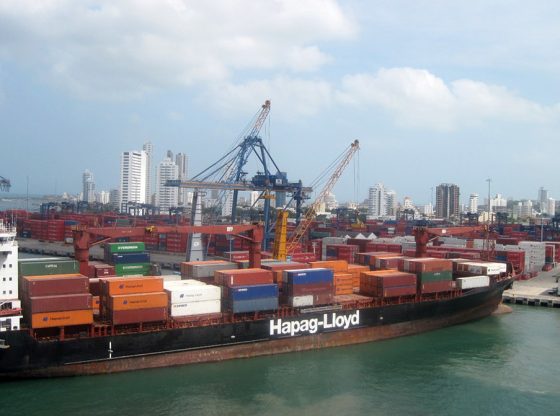 As part of the annual contribution of the Academic Network of Latin America and the Caribbean detailing China´s overseas foreign direct investment (OFDI), Red ALC-China has put together a group of publications. These examine the methodology of registration for OFDI and investigate methodological differences among a group of international institutions such as China´s Ministry of Commerce (MOFCOM), the Economic Commission for Latin America and the Caribbean (ECLAC), the Organization for Economic Co-operation and Development (OECD) and the United Nations Conference on Trade and Development (UNCTAD). The documents also provide firm-level analysis of Chinese companies in the region.

During the 2000-2018 period, Chinese companies carried out 402 transactions in LAC countries, representing 8.203 billion USD in 2018 and with a growth rate of -31.8 per cent with respect to 2017; that is, in 2018, Chinese OFDI represented 51.66 per cent of 2016 (see Table 1). The fall in employment generated by Chinese OFDI in 2018 was even more pronounced, at -66.3 per cent. As a result of these trends since 2017 and again in 2018, the amount per transaction decreased to 178 million USD. If the 2018 Monitor showed three phases of Chinese OFDI in Latin America and the Caribbean, from 2017 onwards a fourth phase with a dynamism significantly lower than that of 2010-2016 can be seen: in the short and medium term a relative stagnation is expected because of relatively low levels of OFDI, particularly when compared with the dynamism of the previous phase (see Table 1).

By type of investment Table 1 also reflects that:

1) In 2018, mergers and acquisitions consolidated themselves as the main type of Chinese OFDI, accounting for 74.76 per cent and 67.98 per cent of the amount combined with employment generated by foreign direct investment.

2) As a result, Chinese OFDI mergers and acquisitions in LAC have become the most relevant, accounting for 62.35 per cent of the OFDI amount and 60.66 per cent of employment during 2000-2018 respectively. 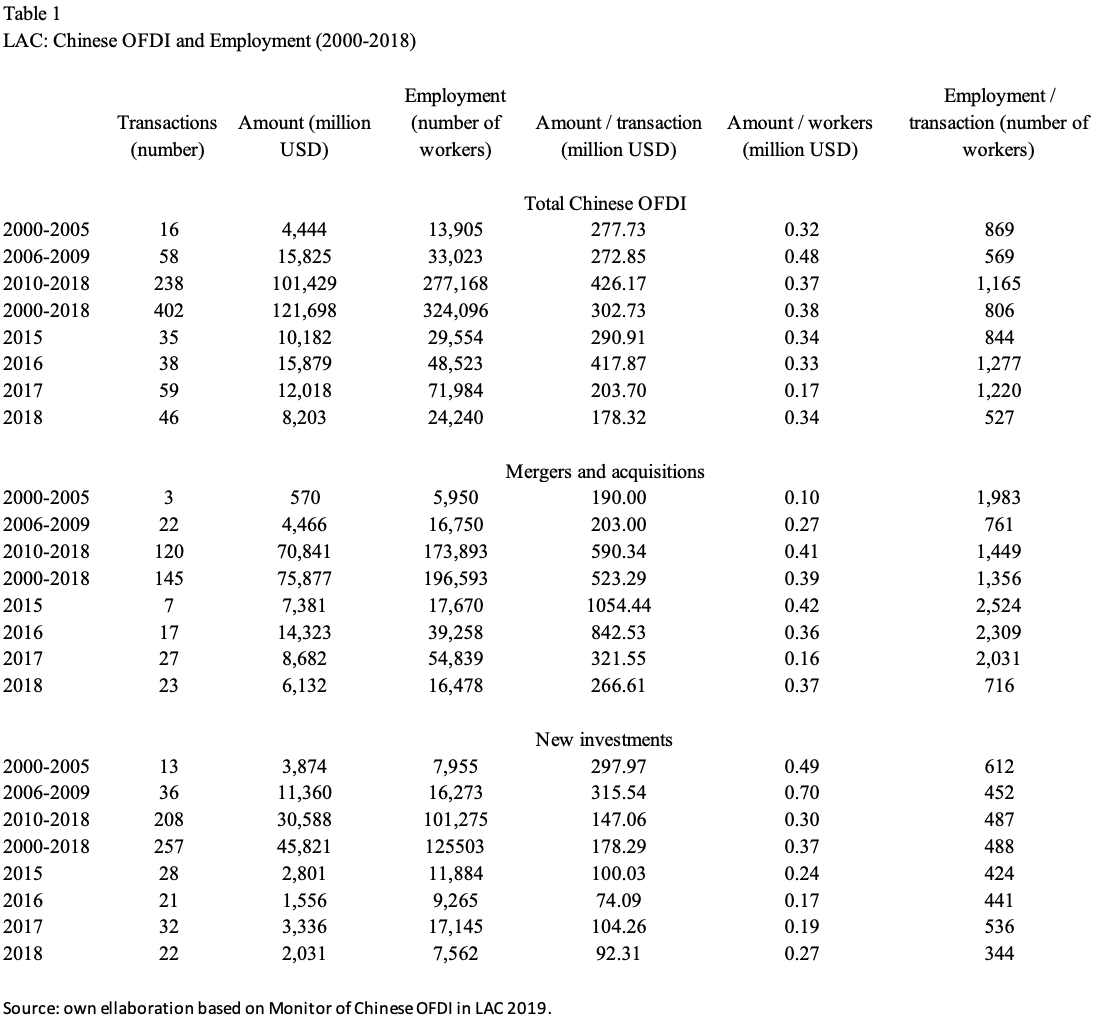 During 2000-2018, Chinese OFDI amounts have been concentrated in three destination activities: raw materials (60.02 per cent); manufacturing (8.62 per cent); services and domestic markets (30.76 per cent):

1) One of the most significant aspects in the last five years has been the diversification of Chinese OFDI in the LAC region. During 2000-2010 the share of raw materials in OFDI and in the employment generated was by far the most significant, since then its presence has varied: by 2018 it accounted for only 53.39 per cent of the amount of Chinese OFDI in LAC and 35.99 per cent of employment by 2018.

2) In recent years, Chinese OFDI has continued to focus on manufacturing, but also on services, the latter accounting for 36.21 per cent and 34.88 per cent of the amount of OFDI and employment during 2010-2018.

3) The purchase of technology in the region by China’s OFDI has been a secondary factor: for the entire period 2000-2018, four cases worth 395 million USD were recorded, generating almost 2,500 jobs throughout the region.

One of the most striking cases of Chinese OFDI is the very high public sector participation: during 2000-2018 participation in the amount of OFDI and employment generated in LAC was 70.2 per cent and 49.1 per cent. However, this trend is changing rapidly: in 2018, for example, participation in Chinese OFDI was only 6.3 per cent. In addition, public sector transactions are much more capital-intensive with respect to employment and employment per transaction: for 2000-2018, for example, the ratio of amount per transaction was 538 million USD and only 149 million USD for private enterprises.

Finally, the methodology used to register OFDI at the transaction level allows for an analysis of the main Chinese companies that carry out OFDI and employment in the LAC region. Overall, there has been a relatively high concentration of employment generated by Chinese direct investment.  During 2000-2018, for example, of the 402 transactions recorded, only those of the top 5 companies generated 25.81 per cent of the employment of all Chinese OFDI in LAC; in 2018 the top five employment-generating companies accounted for 61.54 per cent of the employment generated by Chinese OFDI in 2018; their share was equally high due to the importance of the Tianqi Lithium Corp transaction in Chile.

What does the fragmentation of the WTO mean for global trade?
UK Films at Shanghai International Film Festival 2019 and Cultural Diplomacy