From ‘party-centric’ to ‘nation-centric’ democracy in Pakistan 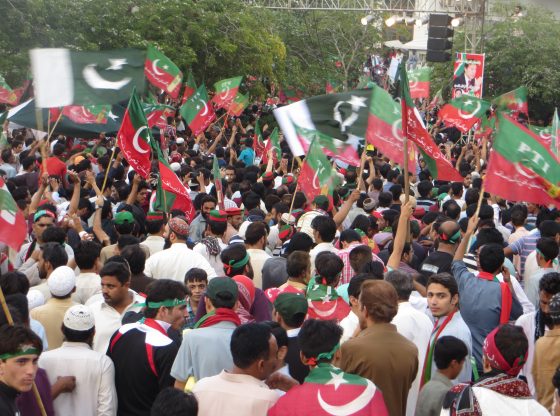 Following the elections of 2018, this marks the second time since 1958 that Pakistan has experienced a transition in government from one political party to another. After the uncertain but nonetheless complete five-year term of the Pakistan Muslim League (PML-N), a new political party, Pakistan Tehrik e Insaaf (PTI), has established itself in government in Pakistan.

Pakistan’s young democracy, which is only ten years old (since each earlier democratic government was overthrown by a coup), is currently facing two challenges. First, as a civilian government, the PTI is always vulnerable to the Pakistani military’s ‘controlling’ tactics, and second, it lacks experience in running government affairs.  The PTI has yet to test its strengths and identify its weaknesses as a ruling political party. Nevertheless, one must give the party credit for cracking open Pakistan’s dynasty-based two-party system based around the PML-N and the Pakistan People’s Party (PPP).

If Pakistan’s PTI government is allowed to complete its five-year term, then democracy will be strengthened in the country

In Pakistan, there has never been a tradition of intra-party elections. Instead, party leadership runs in the family. The daughter of PML-N leader Maryam Nawaz and the son of PPP leader Bilawal Bhutto Zardari are regarded as the rightful ‘heirs’ of these two parties. The PTI has rejected this tradition, however, and the sons of the party’s leader Imran Khan were not permitted to attend his swearing-in ceremony.  The PPP and PML-N, in contrast, are both family enterprises.

In a Pakistan ‘nurtured’ by the military, whenever political parties rise to power, they usually concentrate on maintaining the length of their time in power due to the constant threat from the military leadership. These parties do not pay attention to nation-building policies but only focus on policies which will sustain the party.

This repeated pattern of inefficient ‘party-centric’ policies has played havoc with state departments, of which the police department is the most adversely affected. For instance, in Balochistan there are just 125 police stations for the entire province. They are preposterously few in number in comparison with the Lahore division alone, which has 139 police stations. Likewise, after seventy-two years of independence, Pakistan’s Federal Board of Revenue has only been able to bring 1.1 per cent of the population into the tax net.

This time around the PTI has adopted a different approach. It is trying to stick to ‘nation-building policies’, despite the daunting challenges. While previous governments provided artificial relief to the masses through subsidies, as they didn’t want to create any displeasure in the vote bank, this government is abolishing unnecessary subsidies in order to lower the burden on the national exchequer.

However, there are voices of dissent in society who think that the army still runs the country from behind the curtain. It is widely believed that the military is the real ‘kingmaker’ in Pakistan, and doubts have been raised about the current PTI government as well. The Ministers of State chosen by Prime Minister Imran Khan are mostly the same as they were during the era of General Musharraf.

Politics is a very precarious game in Pakistan, where competence does not give anyone the right to run affairs of state. The cliché of being electable is what rules government affairs. The ‘electables’ constitute a political elite who usually join politics for personal gain. Each political party that comes to power on the basis of these ‘electables’ has no option but to utilise them as ministers. However, breaking the old pattern, Imran Khan has replaced some ‘electables’ with technocrats in the key posts of Finance Minister and Interior Minister.

Owing to the fear of impending martial law at any time, the political parties used to nurture those who were loyal to the party rather than politicians who would be beneficial for the country. The current leadership, however, is adopting a bold strategy, because it is risking the support of its loyalists and instead giving preference to those who are beneficial for Pakistan.

This PTI leadership is also vocal when it comes to Pakistan’s foreign policy. It is opening up with Iran, despite the tense relationship between Iran and the US. Unlike his predecessors, Prime Minister Imran Khan has not yet visited the US, but he has already visited Iran, Saudi Arabia, China and Malaysia. This indicates the clear direction in foreign policy being taken by Imran Khan, sans US influence.

In the political domain, a new paradigm based on nationalism is sprouting up in Pakistan around the question of whether this government has been truly elected by the people of Pakistan or has been ‘installed’ by the real rulers, i.e. the military. Whatever the reality is, the PTI government is undoubtedly taking some bold steps and giving new impetus to various  aspects of Pakistani statecraft which have long been dormant.

To strengthen the country’s democracy, Imran Khan has introduced direct elections of town and city mayors in Punjab. Earlier, such a move was resisted by the political parties as it could draw power away from Members of the National Assembly (MNAs) and Provincial Assemblies (MPAs) and hand power to the locals for development work.

In the past, almost nobody who was truly visionary and wanted to work for his constituency was given a party ticket, and most of a party’s MPAs and MNAs do not even visit their constituency, except in the election season. Consequently, owing to the disinterest of the elected politicians, constituencies often lack basic facilities. Therefore, giving power to the locals to enable them to change their plight will breathe new life into Pakistan’s dysfunctional democracy. It will create new leadership from within local communities and break the pattern of democracy reliant on ‘electables’.

Although the current government is facing many economic pitfalls, it seems that, finally, the political and military institutions have made peace with each other in the national interest. Despite its lack of experience in running the state’s affairs, this government enjoys the trust of the military leadership. The long journey to democracy in India helped the masses mature until they could turn away from Congress’s dynasty-based politics in the recurrent elections of 2014 and 2019. The same might also happen in Pakistan if democracy can be sustained.

If Pakistan’s PTI government is allowed to complete its five-year term, then democracy will be strengthened in the country. The system of locally elected mayors will bring new leadership from the grassroots level.  All that Pakistani democracy needs, therefore, is time to mature, and an unhindered democratic system will certainly bring the country further along the road to progress and prosperity.

Maryam Mastoor is a research analyst at the Institute of Regional Studies, Islamabad Pakistan.