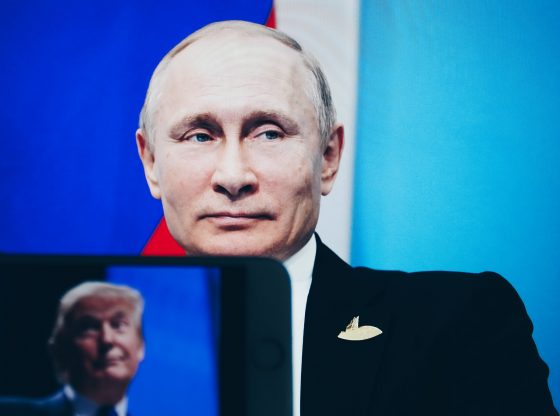 Once again, Chinese and Russian leaders proclaimed that they have boosted bilateral relations to an unprecedented level and are entering a new era in reshaping the world order together. If endlessly repeating the same message carries the risk of wearing out the receptivity of those paying attention, the case they made in Moscow and St. Petersburg over three days in June is more persuasive than previously. This is apparent in strategic triangle relations with the United States, in regional relations with neighbouring countries, and in bilateral relations economically and strategically. Yet, Vladimir Putin and Xi Jinping make a habit of overselling their close bond.

A significant restraint in the Sino-Russian relationship has been the hesitation of one or the other—of late China more than Russia—to alarm the United States to take countermeasures to the rise of a quasi-alliance. That restraint is fading for China in the midst of a trade war with the Trump administration, as it had faded for Russia once the impasse over Crimea and Ukraine proved to be unresolvable. There is no prospect of a breakthrough in Russo-US relations to transform the geometry of the strategic triangle despite Trump’s softness for Putin and Putin’s hopes for an election outcome in 2016 that would lead to sanctions on Russia being lifted. Even if the trade war with China should result in an armistice, the Sino-US bifurcation over 5G and other cutting- edge technology is bound to result in some decoupling. In turn, Sino-Russian cooperation over 5G was announced this month, while the two are seeking joint means to cope with US sanctions and tariffs as well as to bolster military ties within an adversarial global strategic framework.

Since Boris Yeltsin went to Beijing in late 1992, Sino-Russian ties have advanced in a triangular framework, which has grown increasingly favourable for their relationship. In 2019 conditions are ripe for a further shift in the triangle toward a strong nexus on one side and weak linkages with the third party on the other two sides. Memories of the Sino-Soviet split that left both parties vulnerable to the United States are widely invoked. The two have forged a strategic marriage, not a marriage of convenience, durable and amenable to strengthening at this time.

As China has tightened its regional net, especially through the Belt and Road Initiative, Russia has vainly pursued three different strategies to ward off the Sinocentric regionalism it fears: 1) it could feign cooperation but strive to thwart China’s advance, as in preventing the Shanghai Cooperation Organization from forging a free trade agreement or a major security organization, finally securing India’s admission, in part as a check on China; 2) it could cultivate closer ties to Asian countries, making the case for multipolarity, but outreach to Japan, South Korea, India, and even Vietnam has been episodic and less consequential than US ties to these states with little balancing effect; and 3) it could construct its own regional architecture either as distinct from China’s or as a way to encompass China’s in something that Russia could, at least, become a co-leader of, but “docking” the Eurasian Economic Union with the Silk Road Economic Belt has proven elusive and trumpeting the Greater Eurasian Partnership has rung hollow. Frustrated in countering Beijing’s advancing regional agenda, Moscow has swallowed its pride with no means to avoid retreating and no will to look elsewhere apart from brief dalliances with North Korea.

Russia claims to have an autonomous foreign policy in areas surrounding China and not to have any commitment to be drawn into conflicts that might arise, as with India, Vietnam, and Japan. Yet, it has edged closer to China’s positions: cooperating more with Pakistan despite India’s reaction; putting more pressure on Japan over history, and backing China on North Korea even if a degree of initiative is exhibited  None of Russia’s claims for how regionalism is unfolding are being validated.  Putin’s “Turn to the East” is overwhelmingly a turn to China in all respects.

Barriers to bilateral integration, which China has wanted and Russia resisted, have been falling. Trade has risen substantially, reaching $108 billion with $200 billion the announced target.  After years of tight restrictions on Chinese investments in the Russian energy sector, projects such as the Yamal LNG development are going forward, along with the oil and gas pipelines that draw the most economic news.  The old notion that politics are hot and economics are cold in this relationship is less true, and the trailing role of culture is also somewhat receding as public opinion on both sides turns more positive. Yet, apart from energy, there is no showcase economic project, as would have resulted through the Moscow-Kazan’s high-speed railway to be built by the Chinese in a plan that has not materialized.  Joint industrial parks on the border failed too. The Heihe-Blagoveshchensk bridge soon to open was conceived as a centrepiece to jumpstart cross-border ties, but Russia dragged its feet for a quarter century. Disappointments abound in boosting bilateral ties, but Russia has found no alternative to yielding on stalled plans.

When faced with the choice of leaning to the West or to the East, Putin has turned Russia to the East, even if trade with Europe remains larger. When faced with the choice of embracing Japan or South Korea as the desired economic partner in the Russian Far East, he has failed to create conditions welcoming to their companies, leaving China as far-and-away the preferred economic partner. Politically, China’s weight in Russia far supersedes that of any other state. Despite nervousness toward Chinese sojourners and even tourists, attention toward wooing them keeps growing. The bilateral relationship is driven by summits and central government agreements with mutual investments slow to grow and grass-roots exchanges more formalist than spontaneous. This, however, does not negate the momentum still building in relations

While Putin and Xi Jinping are prone to exaggerate their “best friend” relationship and the best ever ties between their countries, they are drawing closer with no reversal in sight. Given the US factor, the failure of Russian calls for multipolarity in Asia, and the gradual overcoming of barriers to bilateral economic integration, the Sino-Russian relationship has no obvious barrier to deepening further in the 2020s. Abe Shinzo’s wooing of Putin, Moon Jae-in’s New Northern Policy to draw Putin closer, and Trump’s admiration of Putin have failed to reverse the forces driving Putin and Xi closer, and there is scant prospect they will do so in the foreseeable future.

Gilbert Rozman is the editor of The Asan Forum and the Emeritus Musgrave Professor of Sociology at Princeton University, specializing in Northeast Asian societies: China, Japan, Korea, and Russia. He has compared them, most recently concentrating on national identities. In addition, Rozman works on sociological factors in international relations, emphasizing mutual perceptions and barriers to regionalism.

From ‘party-centric’ to ‘nation-centric’ democracy in Pakistan
Why accountability matters: The case of Sri Lanka