Why accountability matters: The case of Sri Lanka 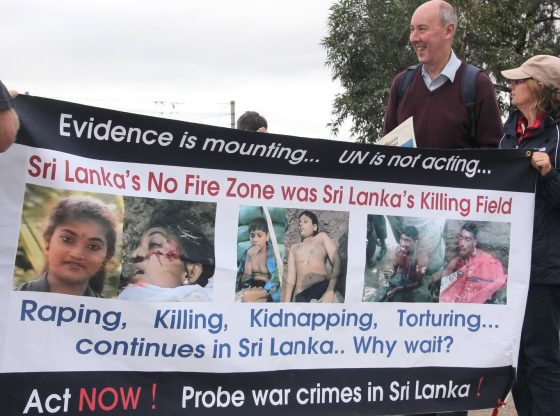 Over a decade has passed since the Sri Lankan civil war, but the memories and trauma of the conflict continue to plague the island. This past decade has not seen any significant progress in terms of transitional justice, it has not given closure to victims, and nor has it held those responsible for grievous crimes to account.

Instead, Sri Lanka has seen the resurgence of a triumphant nationalism which continues to perpetuate cycles of violence. This nationalism has been bolstered by the recent tragic Easter bombings in which over 250 people were killed, as hardline nationalists call for increased militarisation, the policing of minorities, and praise of war criminals.

Within this landscape we see liberal Colombo politicians such as Ranil Wickremesinghe continuing to argue that, contrary to what has been reported by non-governmental organisations (NGOs) and international bodies such as the United Nations (UN), the ‘real issue’ is not transitional justice, but economic progress. This is the standard lie that these Janus-faced politicians usually peddle to the international community, but a cursory glance at their domestic position reveals that they are pandering to the worst impulses of far-right nationalists.

President Maithripala Sirisena has repeatedly told his supporters that he will refuse to ‘prosecute war heroes’, and he has depicted international pressure as an invading ‘foreign force’ threatening the sovereignty of the nation. This was again highlighted by Amnesty International’s Asia Pacific Manager, Francisco Bencosme, who warned that ‘a culture of impunity persists’ because of ‘a lack of genuine political will’. ‘Key government officials, including President Sirisena, have backtracked publicly on commitments’ made in Resolution 30/1.

More recently, we have seen Sirisena grant a presidential pardon to Gnanasara Thero, a hardline Buddhist nationalist leader of the Bodu Bala Sena (BBS) organisation. Gnanasara has played a pivotal role in stirring up anti-Muslim rhetoric and was jailed for threatening the wife of a journalist who had disappeared. The BBS has been linked with Myanmar’s extremist 969 movement, which has been accused of driving support for the ethnic cleansing of the Rohingya Muslim community.

Hence we observe the delicate footwork of Sri Lankan politicians who wish to retain the support of nationalists from within the country while avoiding international scrutiny. In doing so they stress the importance of focusing on economic development, government corruption and employment rates, whilst omitting or downplaying concerns over military accountability, knowledge of disappearances and demands for devolution.

The politicians frame such arguments and concerns as divisive, as ‘reopening old wounds’, and strictly as a ploy by the ‘menacing’ international community to undermine the sovereignty of Sri Lanka. They certainly do not view these calls as coming from the minority communities, be they the families of the disappeared who have been protesting on the streets for over 800 days; grief-stricken widows demanding government accountability for war crimes, villagers demanding that the military vacate their land, or the journalists who continue to face routine threats of harassment and abuse.

What is interesting to note is that, contrary to what is stated, questions of economic progress are intertwined with calls for accountability and transitional justice. US Democratic Representative Danny K. Davis reminds us that in the post-war landscape we have witnessed the increasing encroachment of Sinhalese from the south of the country onto traditional Tamil and Muslim land. This has been dramatic in the last two years and ‘could lead to an increase in violence in the country’.

One example is the military occupation of Keppapilavu, a village in North-East Sri Lanka. According to a report published by the Adayaalam Centre for Policy Research in October 2017 (Normalising the Abnormal: The Militarisation of Mullaitivuon), residents were continuing a 200-day protest demanding the release of their lands. At the time only 138 acres out of 482 had been returned, despite multiple promises that the land would be released by July 2017.

Villagers also reported ‘seeing the military use their fertile lands to harvest coconuts and sell them in local markets. Villagers [were] further deprived since they cannot access the fields they once used to raise cattle, cultivate peanuts, and grow rice paddies. Where land has been released, villagers have returned to find their houses and wells completely destroyed, and many of their coconut trees razed. Over six months later, villagers still have not received any resettlement assistance from the government and are continuing to live under tarp shelters on their lands’ (Adayaalam 2017: 17).

In May of this year it was reported that protesters continued to oppose the occupation of their homes, reaching their 791st day of protest. The military has increasingly occupied areas in the north and east of the island for commercial reasons, using the land for hotels as well as exploiting the natural resources without compensating the native populations. They have employed Sinhalese from the south, instigating a demographic shift and a migrant workforce.

Evidently, the economic question is an important one, as it determines people’s livelihood. However, the government is very selective about which information it chooses to stress, whilst the military silently encroaches into public life. As Adayaalam puts it, the aim of all this is to ‘normalise the abnormal’.

It is important to remember that alongside the Sri Lankan government’s refusal to hold the military accountable for the war crimes committed and the continuing routine use of sexual violence and torture by the state, there are global superpowers which have also pushed against calls for accountability.

During Donald Trump’s presidency we have seen the US withdraw from the UN Human Rights Council over ‘unfair’ treatment of the US and its partners, notably Israel. The US has also placed barriers in the way of investigators from the International Criminal Court (ICC) who have been tasked to look into war crimes committed in Afghanistan. In the UK too, we have seen the Conservative government push against the prosecution of British veterans who have been accused of committing crimes such as the unlawful execution of civilians during ‘The Troubles’ in Northern Ireland. Worryingly, the proposal to grant veterans immunity has been backed by Labour’s Shadow Defence Minister.

In all of these cases, we see a similar rhetoric of war heroes, of a nation being harassed by the international community, of creating division. It is this narrative that treats criticism of the military as an act of sedition. We are forced to accept the status quo or be crushed underneath it because of this narrative which frames critical self-reflection as an apocalyptic moment which would bring about the demise of the state.

In contrast to this narrative, however, we may see Canada’s decision to accept its role in perpetuating genocidal violence against its indigenous people as a glimmer of hope. Simply accepting that there is an unjust system is not sufficient, and action must be taken to dismantle the oppressive framework that allows women from the indigenous communities to disappear and to be murdered at a far greater rate than men. Yet the acceptance is a moment of catharsis, as it allows for the recognition of minority voices as opposed to the perpetual retention of in- and out-groups. This recognition helps to rebuild trust in the state and it maintains the appropriate checks and balances which ensure that our ideals are upheld.

Sri Lanka continues to treat calls for accountability as an existential threat to the state. In doing so, it threatens the survival of the nation since it refuses closure to the victims, allowing for faith in the state to dwindle. In addition, it strengthens the nationalists’ stranglehold on the nation and, perhaps more importantly, it perpetuates cycles of violence because those responsible are allowed to continue unchecked.

Viruben Nandakumar is a recent graduate from the London School of Economics, where he completed an MSc in Political Theory. He contributes to the online newspaper The Tamil Guardian and blogs at: https://virubenn.wordpress.com/.