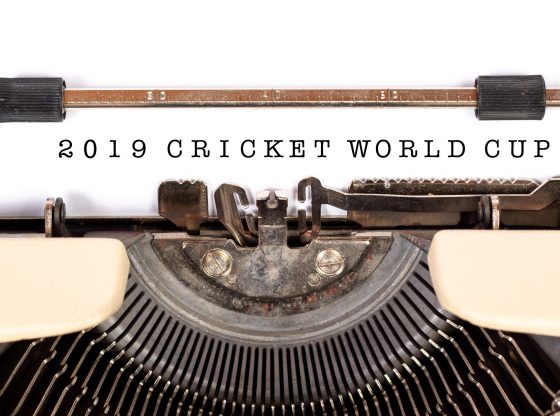 The 2019 International Cricket Council (ICC) World Cup. A true showcase of perseverance, precision and sportsmanship. This event is not just a celebration of a sport, but an amalgamation of many cultures around the world.

Running from 30 May to 14 July 2019, 10 teams from different countries are taking part in the 2019 ICC World Cup, which is being hosted by England and Wales. It is safe to say that all the matches contain their fair share of action and entertainment. Famous cricket grounds such as The Oval in London and Old Trafford in Manchester add to the enormous history of this sport, as well as the prestige of the World Cup.

A glance around a cricket stadium sees the stands filled with people from across the world. Be it the green Pakistani flag or the Indian tricolour, the supporters of the Australian team or New Zealand – thanks to the vibrancy of celebration in the cricket stadium, all differences are set to one side and these nations are united through the love of cricket.

Unfortunately, some of the history which the sport carries is not always so positive. The last time that Bangladesh and New Zealand were due to play against each other was in the wake of the Christchurch shootings – a tragic event which prevented the match from going ahead. However, the Cricket World Cup drew these two teams back to play each other once again on 5 June.

The nail-biting match carried incredible emotion as it saw New Zealand clinch victory over Bangladesh by just two wickets. In a pre-match press conference, Bangladesh’s coach, Steve Rhodes remarked that the players ‘seem to have some sort of brotherhood there now’ following on from the tragedy in Christchurch.

This brotherhood signifies even more that cricket is a sport rooted in compassion and strength, which far surpasses the physical demands of the game.

This year’s Cricket World Cup has certainly been action-packed. One of the most anticipated games was on 2 June, when Bangladesh (arguably the underdogs in this tournament) played South Africa. Bangladesh’s consistent power hits and perfectly executed bowling skills saw them beat South Africa by a remarkable 21 runs. A match which serves to remind us all never to judge a book by its cover!

Another great example of cricketing at its finest was the match between India and Afghanistan on 22 June. Having set a target of 225, India won by a mere 11 runs against Afghanistan. Perhaps one thing which joins these two nations together is their cultural background. In Afghanistan, cricket has become the most important sport nowadays – although it was once banned by the Taliban, cricket has been able to generate a ray of hope in Afghanistan’s post-conflict society. Similarly, supporters of the Indian cricket team are enthusiastic about every format of the game – whether test match, one-day meeting or T20 – and it is not wrong to say that the ICC receives the maximum amount of support from the Board of Control for Cricket in India (BCCI).

The World Cup hasn’t been plain sailing for all the participating teams. Take Match No. 6, for example, when the (home favourites) England faced Pakistan. Playing on home soil perhaps made their defeat to Pakistan by 14 runs that little bit more gutting. However, the fans were not too disheartened, and how could you be when you’re engrossed in such a euphoric, enjoyable atmosphere!

Cricket itself is a community. All those involved have goals, aspirations and role models including the likes of Joe Root, Virat Kohli, Shakib Al Hasan and Kane Williamson. It’s fair to say that the precision of the game and the finely wired teamwork (like that of a machine) is inspirational. The emphasis on teamwork is definitely one of the main messages that cricket homes in on. That and the thrill of seeing how a match will conclude all add to the game’s appeal.

The ability of different nations to come together, both in the stands during a match and maybe at the local pub afterward for celebrations (and commiserations), is both joyous and interesting. Amongst the hard news stories of deaths, attacks and extremist groups that we see all too often in the news headlines, cricket offers a form of escapism. One could go so far as to state that all sport is a form of entertainment and escapism combined, and nowhere is that more evident than with cricket.

The changeability of each match and the compassion that both players and fans have for this sport is poignant. The 2019 Cricket World Cup has something for everyone to enjoy and to motivate them; even a good piece of cake, as legendary cricketer Brian Johnston once fondly commented.

More than this though, cricket is a sport which is celebrated around the globe and is accessible to everyone regardless of their religion, age, colour, economic background or ethnicity. Cricket comes with an overwhelming sense of compassion and love stretching from years past right up to the present day.

The ICC World Cup is a celebration of everything to do with cricket. It brings together the very best cricketing nations and people from all over the world – incidentally providing an extremely lucrative travel business for the host nation – and it is undoubtedly one of the most prestigious global sporting events.

Anna Parkinson is an aspiring journalist. She is in her second year of BA (Hons) in Journalism at the University of Lincoln. She tweets @AnnaParkinson10.

From alliance to trade war: The role of China’s ‘American Hands’ in the formation of Sino-US relations
Reforming an ‘evil’ party-list system