From alliance to trade war: The role of China’s ‘American Hands’ in the formation of Sino-US relations

Home /China, China-US, Culture and Society, Democracy, Education, History, United States, US in the Asia-Pacific/From alliance to trade war: The role of China’s ‘American Hands’ in the formation of Sino-US relations 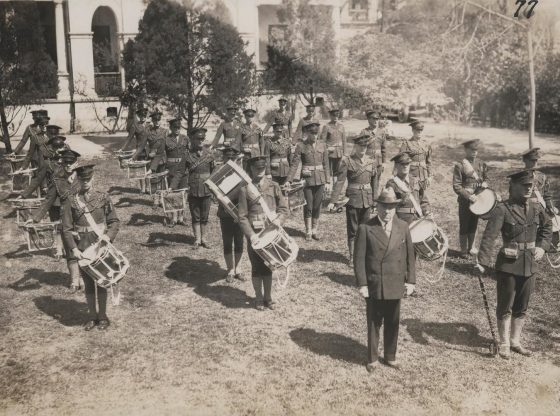 Image Credit: Members of the Fourth Marine Regiment Drum and Trumpet Corps in China, circa 1930 by USMC Archives/Flickr; Licence: CC BY 2.0.

On 13 December 1937 a notable and courteous gentleman arrived at the Waldorf Astoria Hotel in New York. As the Dean of the Faculty of Arts at Peking University in China, he had come to attend a forum hosted by the American Foreign Policy Association. The forum was specifically organised to discuss the ongoing warfare in East Asia, which was of interest to upper-class American audiences as well as Chinese and Japanese journalists. The Republic of China (ROC) was then in its ‘darkest hour’, engaging in desperate resistance against full-scale invasion by the Japanese Empire.

During the forum, this gentleman made an emotional statement about how China was fighting alone for its existential survival against Japanese brutality. The statement brought him into an argument with two Japanese editors from the well-known newspapers Osaka Mai-nichi and Tokyo Nichi Nichi who were also at the forum, and drew widespread attention from the Americans.

The gentleman’s name was Hu Shi, and he had been active in visiting major American cities such as New York and Washington in order to attract external political support for the Chinese Nationalist government (or the Kuomintang, KMT) since the early 1930s (long before his official appointment as Chinese Ambassador to the United States in 1938).

Due to ideological distrust and bureaucratic caution, the People’s Republic of China (PRC) nowadays continuously relies on diplomats nurtured by its own political system, rather than using people with an intellectual background similar to Hu Shi to achieve their foreign relations objectives

Born in Anhui Province and growing up in Shanghai, Hu Shi was one of the early generation of modern Chinese intellectuals who received funding appropriated from the Boxer Indemnity Scholarship Programme to sustain his education in the United States. First he began studying agriculture at Cornell University, where he later changed his major to philosophy and literature. He then went to Columbia University to complete his Doctorate in Philosophy under the supervision of John Dewey, who taught him pragmatism.

Hu Shi returned to China in 1917 to take up his post as a lecturer at Peking University, which he held ever since. On 17 September 1938, while he was still serving the Peking University, the ROC President Chiang Kai-Shek appointed him as the new Chinese Ambassador to Washington. He remained in this post for almost five years until his resignation in 1942.

Why did Chiang Kai-Shek pick Hu Shi for this position? He was not particularly favoured by the Chinese Nationalist political establishment due to his criticism of the KMT’s policies. He was also far from the only central figure who could help the ROC to court US assistance and eventually establish the Sino-US alliance in the Second World War. However, his ambassadorship reflected Chongqing’s (the ROC’s wartime capital) strategy for approaching Washington, which was to use members of the Chinese academic elite educated with American values in order to convince the true Americans.

Hu Shi had embraced liberalism and the US political system ever since the early days while he was still a graduate student in New York. In the 1920s and early 1930s, he advocated persistently to both the KMT government and the wider public that China should look to establish a democratic system similar to the United States. Despite the fact that Chiang Kai-shek and other KMT leaders dismissed his proposal, they eventually selected him to meet the US President Franklin Roosevelt and Secretary of State Cordell Hull because they believed no one else knew American minds better.

With this appointment, Chongqing was beginning to employ its officials in Sino-US relations in a new way. The later visit of a delegation led by Harvard graduate T.V. Soong as Chiang’s personal representative, as well as the visit by Madame Chiang Kai-shek (who grew up in Massachusetts) to the US Congress in the 1940s, were both inspired by Hu Shi’s ambassadorial experience in North America. All of them were China’s ‘American hands’ – in contrast to the Cold War equivalents on the American side.

Although he hesitated to accept this appointment due to the controversy it caused within Chinese academia, Hu Shi had been one of the strongest advocates of a Sino-US partnership throughout the 1930s, when most other people believed the ROC should align itself more with Nazi Germany or the Soviet Union.

In his English writings, Hu Shi critically observed the changing power balance across the Pacific Ocean and that Japan was gradually losing its hegemonic dominance in the Asia-Pacific region. The Soviet Union might fill the power vacuum in East Asia, but the ROC should expect the United States rather than the Soviet Union to take the initiative to restore peace and ‘collective security’. Thus the temporary situation of international anarchy in both Asia and Europe could be settled under American influence.

Hu Shi’s ambassadorial work was based on these writings. In order to indicate the importance of US participation in Pacific diplomacy, he gave speeches to a wide range of American audiences across different social classes and regions. These audiences included politicians from the US Congress, business leaders, members of the general public, religious communities, media professionals, legal groups and university academics – with whom he was most familiar.

Hu Shi knew that under the US democratic system, public opinion could be co-opted to compel Washington to make and execute decisions. His strategy was to intensively invoke American public sympathy towards China’s war with Japan, and thus push Washington to form an alliance with Chongqing in response to public demands. In doing so, Hu Shi used many significant analogies in his speeches around the country, most of them given to general audiences.

For example, in his speech on 4 December 1938 in New York, Hu Shi referenced the Continental Army’s experience in Valley Forge during the American Revolutionary War when he described Chinese resistance against the Japanese. He argued that a key reason why America eventually won independence was because it received considerable support from the French against the British Army. The situation the Chinese were facing was thus compared to the Americans at Valley Forge.

Chongqing hoped Washington would give a helping hand and follow the example of Paris from two hundred years before. In another speech on 23 March 1942, Hu Shi argued that the Chinese were fighting for ‘a way of life’, that they were standing with American democracy and protecting those Western beliefs in the East.

Alongside these down-to-earth interactions with ordinary American people, Hu Shi had in the meantime been engaged in intensive lobbying efforts with politicians and diplomats from the White House and Congress and even prominent media figures. All his efforts were carefully targeted to ignite Washington’s internationalist passion in foreign policy, and this led first to the amendment of the Neutrality Act in 1939 and then to the eventual establishment of the Sino-US alliance in 1941.

In contrast to contemporary practice, Hu Shi’s ambassadorial history reflects the loss of a certain kind of meritocratic expertise with a Western cultural upbringing in regard to Chinese Communist diplomacy towards the West, especially the United States. Due to ideological distrust and bureaucratic caution, the People’s Republic of China (PRC) nowadays continuously relies on diplomats nurtured by its own political system, rather than using people with an intellectual background similar to Hu Shi to achieve their foreign relations objectives.

The absence of a twenty-first-century Hu Shi corresponds with a more Sino-centric worldview in China’s global affairs. It is also contributing – amongst other factors – to a substantial and  ever increasing gap between the diplomatic mind-sets of Beijing and Washington. Such deficiencies are laid particularly bare amid worsening tensions, including the present Sino-US friction over trade as well as other contentious negotiations over the course of the past year.

Hao Chen is a PhD candidate in the International History of Modern East Asia at the University of Cambridge.