Why Filipinos have come to embrace authoritarian ‘discipline’ 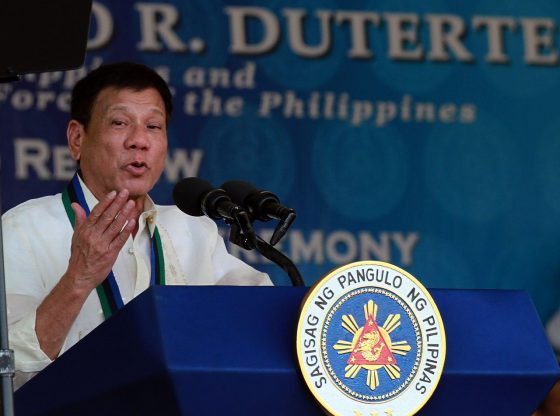 With no opposition candidates winning a single senatorial seat, President Rodrigo Duterte achieved a perfect victory in the 2019 midterm elections in the Philippines, despite his massive use of violence in the ‘war on drugs’. Imee Marcos, daughter of the late dictator Ferdinand Marcos, joined her brother in the Senate.

Overall, the result of the May elections reflects the significant decline of liberal democracy in the Philippines, and this short piece offers a medium- to long-term explanation as to why a majority of Filipinos have come to embrace an authoritarian ‘discipline’ that limits both their freedom and their lives.

Nozomu Yamazaki claims that Giorgio Agamben’s ‘state of exception’ characterises the global decline of liberal democracies in the twenty-first century. Neoliberalism and populism have damaged the balance between liberalism and democracy: populism, because it radicalises democracy while undermining liberalism in the name of the popular will of ‘good people’; and neoliberalism, because it radicalises liberalism while undermining democracy by reducing the ‘demos’ which is responsible for democracy to ‘homo economicus’.

Consequently, the vector sum of extreme populism plus neoliberalism leads to a ‘state of exception’ in which a sovereign state can legitimately kill ‘dangerous others’ in an alleged crisis (Figure 1). Applying the framework, I propose to analyse how populism and neoliberalism have undermined democracy in the Philippines.

Figure 1. The Transition of Legitimacy and Reconfiguration of Violence 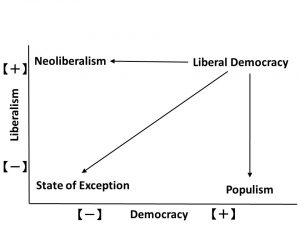 Duterte’s repeat landslide victory in 2019 signifies a historical defeat of the People Power narrative that had served as a dominant moral discourse for national development based on the values of liberal democracy ever since the move to democratisation in 1986. This discourse revolves around the oppression experienced under the Marcos dictatorship, the martyrdom of Benigno Aquino Jr., and the dramatic democratisation brought about by the popular uprising in 1986.

By allying with the Aquino family, it was the traditional political and business elites and the reform-oriented urban middle class who became the mainstream forces in the discourse. Hence this strange alliance, forged by shared suffering and struggle under the Marcos regime, played a significant role in legitimising the traditional elites’ revival within the restored democracy.

The first populist challenge to the elite-dominated liberal democracy emerged in the late 1990s at a time when traditional clientelist politics had been weakened by the emergence of an extremely fluid party system, penetration of the media to the masses, and increased levels of migration for work and remittances. As a consequence, a new moral politics which focuses on definitions of a ‘good we’ vis-à-vis ‘evil others’ has become more decisive than traditional interest politics (concerned with the distribution of resources) in deciding the outcome of national (and possibly other) elections.

In the 1998 presidential election, Joseph Estrada’s populism resonated with the poor – who received nothing from democratisation – and so they formed a counter force against the liberal democratic discourse. This was short-lived, however, since the mainstream forces led by the urban middle class then ousted Estrada in 2001. Although the poor made up the majority of voters, the mainstream forces were much better at appealing through their moral legitimacy as being ‘good citizens’ responsible for liberal democracy on the street and through the media.

By the 2010s, however, another counter force had emerged and become dominant in society, with neoliberal governmentality encompassing more and more Filipinos within the sustained economic growth which had been taking place since the mid-2000s. By shifting the blame for life’s misfortunes from the state onto individuals, neoliberalism requires people to discipline themselves to become ‘good citizens’ who are independent from the state and skilful in the market.

Neoliberalism’s hegemony has affected the struggling poor most, as well as the emerging lower middle class, who usually finish their higher education thanks to the financial support of family members working abroad. They are required by schools, human resource agencies and their workplaces to become disciplined ‘good citizens’ or ‘human capital’ to match up with global market demands, and yet despite their efforts at self-discipline, they suffer from precariousness and limitations in their careers.

As a result, the people who struggle in this way tend to develop a feeling that the disciplined ‘good citizens’ are being victimised by undisciplined ‘evil others’ at the top and bottom of society: namely, the elites who exploit liberal democracy to monopolise power and wealth and the drug dealers and users who plague families and communities.

In the past, those who talked of ‘good citizens’ tried to enlighten and uplift the poor – whom they regarded as ‘probationary citizens’ – to consolidate the hegemony of liberal democracy. Now, however, the new ‘good citizens’ justify exclusion of the undisciplined as ‘evil others’ who are beyond redemption through extra-judicial means, and look down on liberal democratic institutions as mere instruments of the established elite to strengthen their vested interests.

The new moral subjectivity constructed by neoliberalism resonates with Duterte’s penal populism which emphasises ‘discipline’ against drugs and crime. He has successfully articulated this with the deep-rooted popular imagination of social banditry folk heroes, who established justice with compassion and violence outside the law. While Estrada appealed to the class-based majority, Duterte’s populism resonates with the new majority which transcends class, religious, ethnic and regional cleavages. This inclusiveness was made possible by the shared resentment of the ‘good citizens’ against the ‘evil others’ who fail or refuse to be disciplined.

My own field observations confirm that the frustrated lower middle class and struggling poor tend to support Duterte, expecting him to punish the ‘evil others’. Opinion polls also show that young people make up Duterte’s solid support base, which can be interpreted as a reflection of their dissatisfaction. In the May 2019 elections, one-third of voters were between 18 and 35 years old; i.e. those who do not generally relate to the People Power discourse and have no direct experience of the Marcos dictatorship.

The resonance between neoliberalism’s moral subjectivity and Duterte’s populism has led to a ‘state of exception’. By emphasising the alleged crisis of a narco-state, Duterte has successfully created and normalised this ‘state of exception’, where drug users and dealers are extra-judicially, yet legitimately, executed as undeserving ‘evil others’ in order to save the ‘good citizens’.

Duterte exploits the situation which bestows on him authoritarian power and outlaws legitimacy to subvert the existing power relation of the elites. As a counter force against the traditional elites with their origins in land ownership and sugar exports to America, Duterte has made an alliance with the emerging Filipino-Chinese entrepreneurs – who have found business opportunities through economic liberalisation – as well as the Chinese government.

Duterte’s approach to China should therefore be understood in the context of this domestic political rivalry. The result of the 2019 midterm elections shows that so far his ambition is succeeding. Nonetheless, growing levels of anti-China sentiment at the grass roots look likely to become Duterte’s Achilles heel.

Wataru Kusaka is an Associate Professor at the Graduate School of International Development, Nagoya University. He is an ethnographer and political scientist working on the Philippines and is the author of Moral Politics in the Philippines: Inequality, Democracy and the Urban Poor (National University of Singapore Press in association with Kyoto University Press, 2017).

Chinese Christianity encounters Islam along the Belt and Road Initiative
Contested centenary: Remembering the May Fourth Movement in the PRC and across Chinese communities