The party-list system in the Philippines: Is it better or worse for democracy? 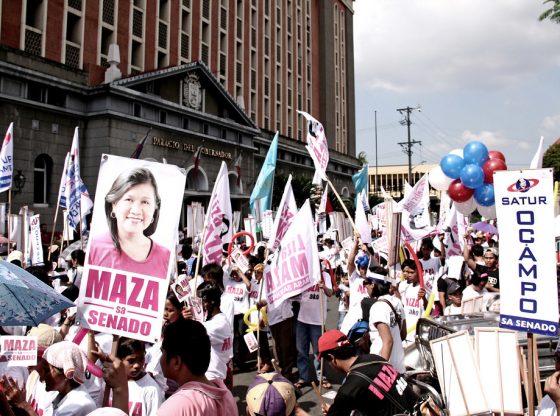 To what extent has the party-list system been able to stave off the resurgence of traditional elitist politics by fostering a more democratic political institution, and is it an effective means to prevent the return of authoritarian rule in the Philippines?

Party-list representation is not to be taken lightly. Collectively, party-list groups are a powerful lot. One-fifth of the members of the House of Representatives are mandated by the Constitution to come from such party-list organisations (around 250 of which are district representatives).

In the beginning, the framers of the 1987 Constitution were guided by the need to allow for greater democratic representation, especially from among the historically marginalised and institutionally underrepresented groups and sectors that otherwise would not have had a chance to be elected by any district-based constituency. This was an implicit acknowledgement of the People Power uprising that toppled the Marcos dictatorship, as well as a recognition of the important role to be played by the wider civil society in democratic policy-making.

In 1995, a law was passed (Republic Act 7941) providing for the election of party-list representatives. Prior to that, party-list representatives were selected from the basic sectors of ‘labour, peasant, urban poor, indigenous cultural communities, women, youth, and such other sectors as may be provided by law, except the religious sector’, as stipulated in the Constitution.

The party-list system prescribed in RA 7941 is unique to the Philippines. Unlike their district-based counterparts, party-list representatives are elected nationally. The Act provides that a party-list organisation must receive at least 2 per cent of the total nationwide votes cast for the party-list system in order to be entitled to one seat. However, this is probably where the similarity with party-list systems in other countries ends.

Under RA 7941, a party-list organisation able to obtain more than 2 per cent of the votes is entitled to additional seats but must not exceed three seats. Strangely, while the system has a 2 per cent threshold, it also has a three-seat limit, thus undermining the proportional system of representation. One effect of this strange set-up is to encourage party-list groups to fragment rather than consolidate in order to maximise on the three-seat limit. Another effect is that the system constantly invites judicial tinkering.

In 2001, Bayan Muna (Nation First) ran as a party-list organisation and received more than 11 per cent of the party-list votes (equivalent to around 1.7 million votes). Bayan Muna obtained three seats as mandated by law, but it could have had more than that. Realising the wasted votes it received, Bayan Muna decided to split into different sector-based groups – one party each representing women, teachers, the youth, the workers, and Bayan Muna itself. This conglomeration of party-list groups became known as the Makabayan (Nationalist) bloc. By 2016, the party-list groups affiliated with the Makabayan bloc had a total of seven representatives in the House. In the 2019 elections, the Makabayan bloc was able to retain six seats.

As a result of this high public awareness, the number of party-list groups participating in the country’s elections has always been high. This is also due to the system’s tendency to encourage fragmentation, compared to traditional or mainstream electoral parties which have a tendency to converge around two major coalition groups.

During the first party-list elections in 1998, more than 9 million votes were cast for 123 party-list organisations compared to around 20 political parties that participated in that year’s elections. Two decades later, there were 134 party-list groups that competed in the 2019 elections while only two coalitions of mainstream parties competed against each other – the pro-administration Hugpong ng Pagbabago (Coalition for Change) and the Oposisyon Koalisyon (Opposition Coalition).

Shortly after the 2001 elections, a case was filed calling for the disqualification of several party-list groups for their inability to represent marginalised and underrepresented sectors as provided in RA 7941 and the 1987 Constitution. At the time, the Supreme Court affirmed that party-list groups are required to represent marginalised sectors and, as a result, disqualified certain organisations that would have been entitled to a seat in the House of Representatives.

By 2013, however, the same Supreme Court reversed its earlier ruling and declared that party-list groups need not represent ‘any marginalised and underrepresented’ sector. The rationale for this later court ruling was to put greater emphasis on proportional congressional representation and less on sectoral representation itself. The effect of the 2013 judicial ruling has been to allow many traditional and elitist politicians to form or join party-list organisations that would allow them to retain their positions of power and influence in Congress.

Shortly after the May 2019 elections, President Rodrigo Duterte referred to the party-list system as an ‘evil’ where ‘they are named after labourers, but their nominees are millionaires’, such that the system no longer served its intended purpose of helping marginalised groups. The President’s assertion seems to have some merit. Some party-list groups now display the features of elitist and traditional politics.

In 2016, a party-list group called One Patriotic Coalition of Marginalised Nationals (or 1-PACMAN for short) claiming to represent the interests of common folk won enough votes to allow it to be granted two seats in the House. One of its two representatives in Congress is the wealthiest member of the House of Representatives, who posted a net worth of PHP 7.9 billion (around USD 158 million).

The name Pacman has been closely associated with boxing champion Manny Pacquiao – himself a member of the Senate and its second-richest member (net worth: PHP 3 billion or around USD 60 million) – who endorsed 1-PACMAN in 2016. Not surprisingly then, the second 1-PACMAN representative is Pacquiao’s business manager. In the 2019 elections, 1-PACMAN again received enough votes to retain its two seats in the House.

Certain sector-based party-list groups have also been co-opted by the traditional political system or have become the training ground for future influence-peddling traditional politicians. In 2019, a political organisation called DUMPER-PTDA won one party-list seat. DUMPER-PTDA stands for Drivers Unite for Mass Progress and Equal Rights – i.e. the Philippines Taxi Drivers Association. It is ostensibly a party of and for taxi drivers. However, its first nominee is Claudine Diana Bautista, daughter of Governor Claude Bautista of Davao Occidental, a province created in 2013 as part of Region XI (Davao Region). More than 80 per cent of the votes that DUMPER-PTDA received in May 2019 came from Region XI. It is not known whether the Governor’s daughter drives a taxi as a profession.

Perhaps the inadequacies and conflicting features of the party-list system law can be traced back to its key designer – Congress – whose members may have looked upon the party-list organisations either as potential competitors or useful platforms in their quest to retain their positions of power and privilege. Either way, the lasting effect of the party-list system can be regarded as one that undermines (rather than reinforces) the legacy of People Power.

Jorge Villamor Tigno is a Professor in the Department of Political Science of the University of the Philippines Diliman and Secretary-General of the Philippine Migration Research Network (PMRN).

Contested centenary: Remembering the May Fourth Movement in the PRC and across Chinese communities
Huawei, the CSSA and beyond: “Latent networks” and Party influence within Chinese institutions