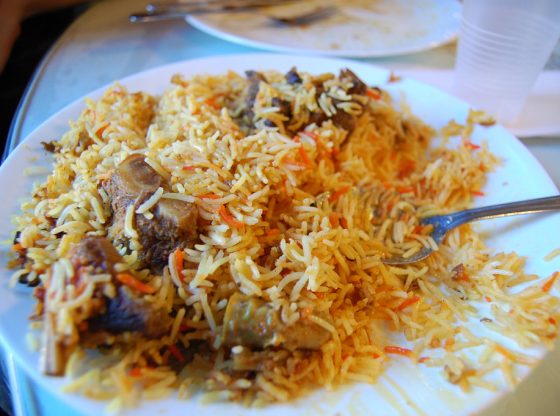 Barring the Indo-Pak rivalry, there are many things which unite the desi community in both India and Pakistan. One of the top two is cricket (of course). The other is biryani: the ‘Queen’ of all desi dishes, featuring meat or vegetables cooked in a subtle combination of spices. The dish has many historical, cultural and even social aspects attached to it in the context of the Subcontinent and Central Asia.

Over the years, biryani has not been restricted to the dining table but is now used as a political tool as well

There is much debate regarding the origins of this dish. The majority opine that it originated in Persia and was brought to the land then known as the subcontinent by the Mughals. Here it was further developed into the dish we all love today. The famous traveller and historian Al-Biruni has precise descriptions of meals at the court of the Sultans who ruled parts of India prior to the Mughals. These also contain mention of rice dishes similar to the Mughal biryani.

Then there is the theory that the Nawabs of Awadh were the real originators of the dish. Most of the money from their treasury went towards food, but biryani did not feature on their menus until half a century into their reign – and that was only because a famine had hit the area.

As a famine relief measure, the Nawab ordered the construction of the Bara Imambara, which is the main architectural feature of modern-day Lucknow. In order to feed the great numbers of people working on the construction, large cauldrons were filled with rice, meat and vegetables and slow cooked for hours. One day, when the Nawab caught a whiff of the biryani cooking, he ordered his royal staff to prepare the same dish for the royal tables, and so biryani became a favourite dish in the Awadh household. The present-day Lucknow or Awadh Biryani stems from here.

In fact, the kind of biryani you eat in India or Pakistan depends on the region you are in, since most regions have their own unique spin on the dish. Within Pakistan, Sindhis (people of the Sindh province) claim that no one can beat their taste. In fact, there is a history of both inter-regional and cross-border biryani wars. 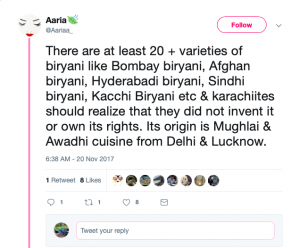 Different types of biryani include Bombay Biryani, Dum Pukht Biryani and Hyderabadi Biryani. Gone are the days when biryani required hours if not a couple of days to prepare. Now ready-made packet spices with complete instructions have reduced the cooking time of this dish to a mere thirty minutes. One can walk into any desi store in any part of the world and find shelves filled with all varieties of the dish ranging from Sindhi Biryani and Bombay Biryani to Vegetable Biryani and even Fish Biryani.

Biryani has deep social and cultural connotations attached to it as well. Marriage ceremonies centre around biryani, and it is as much a poor man’s dish as it is a rich man’s. While restaurants are judged based on the biryani they serve, people are judged by what they eat their biryani with.

Generally, with biryani, spicy green chutney or raita (mint yoghurt) is looked upon favourably. The recent trend of coupling biryani with ketchup, however, is looked down upon by many. There are several memes to that effect. People have indeed cashed in on ‘biryani’ in more ways than one. As well as memes, there is even a website dedicated to providing the best biryani education (www.biryaniuniversity.com).

Biryani is what ties desis living abroad to their home country. Students pay exorbitant prices for a single plate of biryani, just to have a taste of home. According to foodpanda India, on the last day of 2018, they delivered 14 biryanis per minute!

In Pakistan, when mothers are searching for the perfect wife for their sons, one of the top criteria for many is that ‘biryani banani ani chahiyeh’ (she should know how to cook biryani). It is indeed one of the first dishes the new bride is expected to make in her new household. In fact, for any girl or boy, the level of their cooking expertise is not judged by the number of international varieties of cuisine they can make. In the end, it all boils down to how well the biryani rice grains stand out!

With the advent of the China Pakistan Economic Corridor (CPEC), Shan Masala – one of the biggest food brands in Pakistan – made a TV commercial about a Chinese woman making biryani for her Lahori neighbours. The importance of biryani can be seen by such a renowned brand cashing in on the dish to increase its sales. Of course, the aim was to highlight the growing friendship between China and Pakistan, but the fact that biryani was used to bring people from different cultures together cannot be disregarded.

Over time, the importance of food in elections has increased, and the role of biryani in this even more so, primarily because of the ease of making it on a large scale. Over the years, biryani has not been restricted to the dining table but is now used as a political tool as well. In Pakistan, for example, no political rally is complete without huge pots of steaming biryani. And this holds equally true for India, as the history of Indian elections shows that ‘biryani fuels the ballots’.

In effect, the dish has become a crowd puller, since – irrespective of which party they intend to vote for – people flock in for the free food alone. At a recent campaign event by the Pakistan Muslim League (PML-N), a shortage of biryani actually caused many men to push their way through the partition to the women’s side of the tent!

And this is not restricted political rallies either: even on election day, voters are attracted towards voting for a particular party by promises of free biryani afterwards. Moreover, a majority of the voters do not distinguish politicians from each other and rope them all together in their minds. Hence, ‘we might as well enjoy the free food’ is a mantra for many. 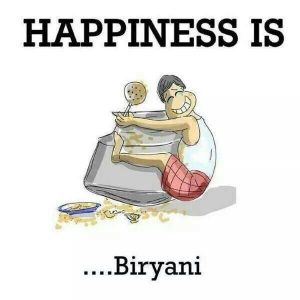 Arhama Siddiqa is a Research Fellow at the Institute of Strategic Studies, Islamabad, Pakistan.

A delicate balancing act in South Asia
Where there is no weighing scale: Pakistan’s fight against child malnutrition