Where there is no weighing scale: Pakistan’s fight against child malnutrition 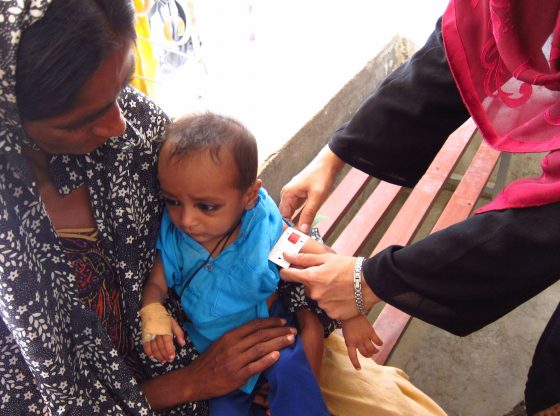 In his inaugural speech to the nation on 19 August 2018, newly elected Prime Minister Imran Khan set out his intention to turn around Pakistan’s poor record on human development.

Citing a recent report by the United Nations Development Programme (UNDP), the Prime Minister lamented the fact that Pakistan is one of the top five countries in the world where children die as a result of diarrhoeal diseases spread by contaminated drinking water, one of the countries most hit by maternal mortality, and a country where almost every other child is stunted. He held up brain images to demonstrate the stark differences between the brain development of a healthy two-year-old and that of a stunted child of the same age. Stunting is not only a matter of impaired growth, he said; it also limits children’s intellectual capacities and thwarts the nation’s development.

Imran Khan’s concern with national development is suggestive of the ‘hard-nosed economic calculus’ that has attracted global health actors to invest in the First Thousand Days of life. The first 1000 days – from conception to the age of two years – offer the biggest ‘bang for your buck’, according to the experts; being a critical window for intervention in regard to improved nutritional outcomes, cognitive development and future human capital. The first 1000 days is an explicit focus of the post-2015 sustainable development agenda, supported by a network of public and private partners including transnational corporations like Nestle.

In practice, interventions have focused on nutrition education, reiterating a long-standing framing of the problem as being one of maternal ignorance or incompetence. Yet it is also a critical matter of social justice, which should draw our attention towards the wider structural conditions that enable – or prevent – people from exercising their human right to health.

Stunting, defined as when a child’s height-for-age is more than two standard deviations below the WHO Child Growth Standards median, has two direct causes: inadequate nutrition and recurrent or chronic diseases which cause poor nutrient intake, absorption or utilisation. Behind these direct causes there are a few key factors: maternal malnutrition, a lack of exclusive breastfeeding, and the absence of a clean, safe and stimulating home environment. And behind these secondary factors lie the wider social determinants of maternal and child health: the unjust and unfair intersecting gender, socioeconomic and caste inequalities that beset Pakistan.

Our qualitative research in Punjab indicates some fundamental difficulties in tackling the public health and social justice challenge of stunting. ‘Where there is no weighing scale’ provided an apt title because our study highlighted the infrequency with which babies are weighed at birth. In the most recent 2017–18 Demographic and Health Survey, only 16 per cent of live babies were weighed at birth. The weighing scale is fundamental to catalysing child health interventions, yet it seems that the very foundation for growth monitoring in Pakistan is weak.

Echoing other research, the mothers in our study linked low birth weight to dietary inadequacy and the burden of domestic work on women during pregnancy. Indeed, women saw it as a manifestation of the lack of care given to them by the families into which they had married. Even without systematic growth monitoring, women were aware of the need to feed a weak newborn more frequently.

However, our study highlighted the frequency with which women’s breastfeeding intentions were compromised by the encouragement to supplement with other kinds of milk – not only infant formula but also animal milk. Women described clinics and hospitals recommending brands of formula milk at the point of childbirth and sometimes also giving them a box to take home. If the baby failed to grow, or if the mother complained of milk insufficiency or of the baby fussing at the breast, concerns were raised about the mother’s milk ‘not suiting’ the baby, not only by in-laws but also by medical doctors.

We identified widespread practices of breast milk testing to establish whether the milk ‘suited’ the child or not, both customary breast milk testing rituals and also pseudoscientific testing at private laboratories. We found breastfeeding to be a precarious process for many new mothers.

This resonates with quantitative research which finds that Pakistan has the lowest exclusive breastfeeding rate in the whole of South Asia, with a declining average duration of breastfeeding and increased bottle feeding. Poor working women in rural and urban settings are the least likely to breastfeed exclusively, and disturbingly, in a majority of cases, it is a healthcare provider who advises mothers on the use of breast milk substitutes.

A year on from his election, Imran Khan has succeeded in making the issue of stunting a political hot potato in Pakistan. But if the government is really serious about tackling this issue, it needs to take structural injustices into consideration. What action has actually followed from this highlighting of child malnutrition, either in terms of bringing health and nutrition programmes closer to women, or of the social and structural determinants of health?

The new Ehsaas scheme promises a welcome focus on community health and nutrition initiatives alongside wider social protection schemes, but in the meanwhile, health budgets have declined at both the federal and provincial levels, and Khan’s promise of building an Islamic welfare state is compromised by the austerity budget imposed by the new IMF bailout.

In commenting on maternal mortality, Imran Khan connected child malnutrition to the position of women in society, but his track record on women’s empowerment has not been entirely compelling. Legislation exists to prohibit the promotion or marketing of infant formula, but as our study and others have found, many medical practitioners and institutions breach this code. Concerning the challenges for working women’s breastfeeding, the national regulatory and support system does not provide paid maternity leave or breastfeeding support. In the long run, the persistence of such trans generational injustices will be the proof of Imran Khan’s pudding.