Home /Asia, Bangladesh, Business and Politics, South Asia/Money politics and the structural power of business in the political economy of Bangladesh 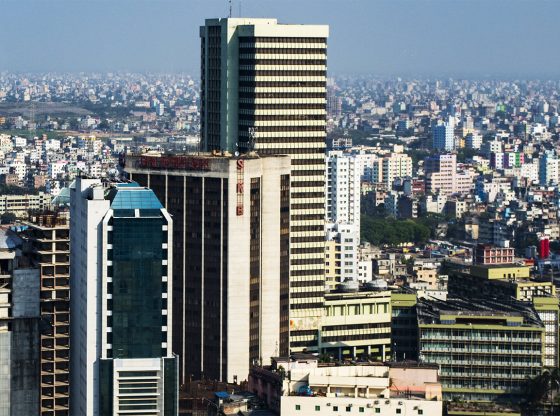 Since the mid-1980s, money politics has emerged as a new but critical aspect of the political economy of Bangladesh. Money is considered an essential tool for influencing both party policy and local and national elections. Those who can spend a lot of money on national and local elections and political activities are given preference in political parties.

Businesspeople in Bangladesh spend money on getting party nominations and to cover numerous election expenses. Money is also spent in various different ways to buy votes and influence the opinions of voters. Wealthy candidates donate money towards building roads, bridges, culverts and schools and to support social, cultural and religious organisations during election campaigns. Some candidates even offer money to those independent candidates who appear to be serious rivals, to persuade them to withdraw their candidature before the elections.

As a result of money politics, businesspeople have emerged as a dominant interest group in the key policy-making bodies, particularly in the Jatiya Sangsad (the Parliament of Bangladesh).  The following table shows the relative position and strength of the groups represented in the Jatiya Sangsad.

Table 1:  The Occupational Background of MPs in the First and post-1991 Parliaments (percentages)

Table 1 shows that since 1991, the position of businesspeople has become stronger and more consolidated than that of any other group in Parliament.  As can be seen, businessmen have won a majority of seats in the fifth, eighth, ninth, tenth and eleventh parliamentary elections since the early 1990s.  In contrast, the position of professional groups, lawyers and, significantly, that of professional politicians has become weaker, giving the business group a competitive edge in the critical policy and law-making bodies.

The advent of neopatrimonial governance, which is marked by political patronage, nepotism, rent-seeking and corruption, has resulted in the emergence of a newly rich group – comprising mainly entrepreneurs, industrialists and importers – who influence the electoral management process through financial and non-financial means. Money is therefore considered an essential tool for obtaining nominations, buying votes and even influencing the work of returning officers, polling officers and polling agents.

Those candidates who spend more money than the limit set by the election commission could make much more money if they are elected as Members of Parliament (MPs) for the ruling party. They use their political influence to obtain contracts for major projects and  loans from the state-owned financial institutions to start new businesses or to expand their existing trade and business in local and international markets. Thus money politics, originating from systemic party patronage, has emerged as a catalyst for electoral management and democratisation in Bangladesh.

Bangladeshi political scientist Rounaq Jahan is of the view that since 1991, elections have emerged as a crucial political game in urban and rural areas, and competing in elections requires a lot of money. Consequently, wealthy businesspeople have become more important and more decisive in party politics. For this group, politics has become a business investment, generating multiple returns if the preferred party assumes state power.

Businesspeople donate large amounts of money as contributions to party funds. They also offer a business share to particular politicians who could then assist in creating profitable business opportunities for them. Many businessmen also participate directly in electoral politics as candidates and by taking up positions on party committees. Politicians also utilise their political connections and power to start businesses themselves.

The rising influence of money in politics, already noticeable under military rule from 1975 to 1990, has been further consolidated in the period of electoral democracy since 1991.

Implications of the rising power of business

The rising power of the business community has created both positive and negative impacts on the process of development and democratisation in Bangladesh.

On the positive side, rising power has given businesspeople a collective platform in parliament and they have been included in different parliamentary committees. Businesspeople-turned-parliamentarians can express their opinions and debate issues and policies related to the development of business in the private sector as well as national and international trade.

Due to the strong position of the business community in parliament, successive governments since the 1990s have continued with pro-business economic and industrial policies and this has definitely contributed to Bangladesh’s sustained economic growth and its transition from the status of least developed country to that of a low, middle-income country in 2015.

On the negative side, money is considered the most influential tool for manipulating elections in Bangladesh. Money can be used for hiring musclemen and terrorists and for influencing government officers who are responsible for managing electoral tasks properly during the elections.  Importantly, money can be utilised directly or indirectly for convincing a section of poor citizens to cast their votes for particular candidates.

Money politics and the influence of money has also weakened the position and status of professional politicians who have been highly engaged in party activities for many years and sacrificed their time and energy for the development of the party. On the other hand, money has created opportunities for the newly rich to obtain important positions on party committees and particularly within Parliament itself as MPs.

Due to this dominant structural power, a group of businesspeople connected with the major political parties – particularly the ruling party – were able to obtain sizeable loans from the public and private banks but did not repay them within the agreed time period, which has led to an increase in the level of loan defaults within the banking sector. Consequently, Bangladesh’s banking sector has been exposed as the most vulnerable business sector, being marked by poor debt recovery as well as various irregularities and corruption in both the private and public banks.

While the structural power of the business community has increased, the organisational power of workers has declined in relative terms as regards protests, demonstrations and social movements, although workers in the garment sector do organise demonstrations and meetings to demand fair wages and security in the workplace as well as other financial and non-financial benefits.

Most importantly, as a result of the influence of money, politics as a noble vocation has lost its position and image in social life. Meanwhile, the process of effective electoral management has become severely endangered, indicating a grim future for the process of democratisation in Bangladesh.

Dr Farid Uddin Ahmed is a Professor and founder Coordinator of the Masters in Governance Studies Programme, Department of Political Science, University of Dhaka. He can be reached at faridahmedpolisci@du.ac.bd