Media coverage of gods in China under an atheist regime

Home /China, Media, Religion/Media coverage of gods in China under an atheist regime 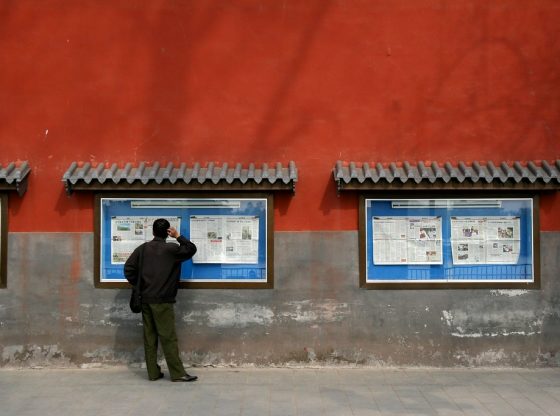 By Qingjiang Yao and Zhaoxi Liu.

Although China officially follows an ideology of atheism, the number of religious followers in the country has been steadily – sometimes dramatically – increasing. Meanwhile, China’s policy on religion and media coverage of it has also shifted from the hard-line eliminationism of the early years of the People’s Republic of China (PRC) to the current hegemonic and coalitional regime in the open-door era. This piece examines how such a shift has been able to take place within the framework of China’s media control system (a detailed discussion of which  is available here).

With an avowed atheist ideology, fundamentally the Chinese government has always deemed religion to be backward and unscientific, but it has fine-tuned its policy on religion depending on circumstances, and this has evolved in three phases.

Mao Zedong’s rule from 1949 to 1976 marks the first phase, which adopted a Marxist-Leninist approach and labelled religion as ‘superstition’ and ‘spiritual opium for the people’. Religious clerics were expelled, jailed, or compelled to follow government directives.

In general, the CCP and the government treat religion as a sensitive issue in relation to social stability, and multiple orders have been issued to prohibit the publication of any content that hurts the feelings of followers of different religions

During the era of the Cultural Revolution, particularly between 1966 and 1969, religion was condemned as one of the ’Four Olds’ (i.e. old ideas, customs, culture and habits of mind) and formally suspended. Temples and churches were occupied or demolished, statues smashed and sacred texts burned. The void left by traditional religion created a space for Mao to establish himself as a semi-god, with religious-like institutions, materials and rituals such as the Red guards, the little red book, loyalty dances, and morning and evening worship (called ‘reporting’).

The second phase of China’s religions policy came about in the era of Deng Xiaoping, and is marked by Document No. 19 of the Chinese Communist Party (CCP) which was issued in 1982. This document declares that religion should be respected and protected to help the Party connect with different sectors of society. It also officially recognises China’s five religions: Buddhism, Catholicism, Daoism, Islam and Protestantism. In the same year, China added Article 36 to its constitution to protect ‘religious freedom’. Deng’s era permitted religions to function while governing them with a mixture of cooperation, discouragement, restriction and suppression.

The third phase is marked by Jiang Zemin’s speech to the National Conference on Religions in 2001, which signalled the CCP shifting from passively allowing the existence of religions to actively utilising some religions to stabilise society. This policy revision was a response to the Falun Gong crackdown in 1999, after a massive protest where thousands of Falun Gong followers surrounded the headquarters of the CCP and the central government in Beijing. Religion was therefore deemed as ‘useful opium’ to enhance the ties between the Party and the people and unity among ethnic groups, and to support social stability, national security and China’s international relations.

Hu Jintao, who came after Jiang, basically followed the same approach, and this policy shift has made China one of the largest religious societies today. By 2014, according to the government’s count, China had (approximately) 222,000 Buddhist clerics and monks, 48,000 Daoist clerics and monks, 22 million Muslims (including about 50,000 clerics), 5.7 million Catholics (3,397 clerics) and 23.05 million Protestants (48,000 clerics). Perhaps China’s latest President, Xi Jinping, has already departed from this third phase, but his approach has yet to be analysed.

In general, the CCP and the government treat religion as a sensitive issue in relation to social stability, and multiple orders have been issued to prohibit the publication of any content that hurts the feelings of followers of different religions. For example, the Chinese government’s Regulations on Religious Affairs state that all publications about religions shall contain no content that ‘jeopardises’ harmony between people or religions, discriminates against or insults religious followers, or propagates religious extremism. To avoid controversy, the videoing, photographing or even textual description of sensitive religious matters, such as the Celestial Burial ceremony, are banned.

The Party and the government enforce these policies through tight control of the media system. The CCP controls the media through its Propaganda Department (PD) and several government agencies, such as the National Radio and Television Administration (NRTA) and the Ministry of Industry and Information Technology (MIIT).

The NRTA is responsible for regulating and monitoring the process of producing, distributing and broadcasting audio-visual content to ensure that no media content would ‘incite ethnic hatred or discrimination, undermine ethnic unity, or infringe ethnic customs and habits’. Nor should it ‘propagate evil cults or superstition’. The MIIT supervises internet content through the ‘Great Firewall’, which blocks internet content from outside China, including certain religious content.

The PD and its branches recommend or appoint the major personnel at influential media outlets. It also issues pre-publication directives, requires self-censorship, and conducts post-publication inspections. In 2000, the Editor-in-Chief of the Nanfang Metropolitan News was fired after Muslims protested against the newspaper for inadvertently placing a picture of five cloned pigs above a photograph of Muslim pilgrims visiting Mecca. And in 2006, the PD pulled the movie The Da Vinci Code from cinemas after protests by Chinese Catholics.

A basic principle of Chinese media is to be very cautious in order to avoid offending any religion. With such high risks, news stories about religion are scarce. Nonetheless, despite the caution, tensions occasionally still occur.

The Workers’ Daily, the official newspaper of the All-China Federation of Trade Unions (ACFTU), was the subject of a large protest in response to a front-page story published on 7 February 1998 which denounced New Year worship in Buddhist temples. Buddhists also protested against Chinese Central Television (CCTV) in February 2014 for vilifying a legendary Buddhist monk. Muslims too have protested fiercely in response to various instances of offensive media coverage of their religion.

Later, when Beijing Television and a magazine in Tianjin labelled Falun Gong an evil cult, its followers eventually organised a mass demonstration of more than 10,000 of its followers, who surrounded the headquarters of the CCP and the central government. This led to the crackdown three months later, after which a huge national media campaign was launched to demonise the cult.

Qingjiang Yao is an Associate Professor at Lamar University, USA. Zhaoxi Liu is an Assistant Professor at Trinity University, USA. They recently co-authored the chapter ‘Media and Religion in China: Publicizing Gods under Atheistic Governance’ in Spiritual News: Reporting Religion around the World, (Peter Lang, 2018), edited by Yoel Cohen.