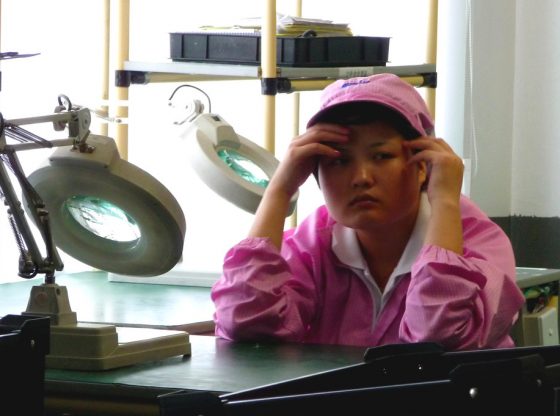 It has been nine years since the Foxconn suicide event in 2010, when 18 young factory workers attempted suicide by jumping from the production facilities at Foxconn, the world’s largest electronics manufacturer and a key Apple supplier; 14 of them died, while 4 survived with serious injuries. The media dubbed this tragedy the ‘suicide express’, which drew international attention towards the ethically notorious ‘labour camps’ of China’s sweatshops. This tragedy can be understood as the explosion of long-term depression wrought by the alienation and exploitation experienced by the factory workers of Foxconn.

It cannot be denied that the working conditions and welfare of Chinese factory workers have improved since the suicide event, perhaps due to the pressure of public opinion and unceasing labour protests. However, the socio-psychological problems prevalent among these factory workers, such as experiencing a ‘spiritual void’ – the sense of uprootedness and disembeddedness from social networks – cannot be addressed simply through economic considerations.

The culture of Christianity, such as fellowships, Bible study classes, choir and Christmas celebrations, is increasingly popular among rural migrant workers, as it not only fulfils their spiritual needs but also provides an opportunity for leisure, relaxation and entertainment beyond the highly exploitative labour regime

It is against this background that a large number of Christian churches and faith-based organisations (FBOs) have started to emerge in and around Shenzhen’s manufacturing zones to provide spiritual care and social services for rural migrant workers, and particularly for the factory workers of Foxconn.

It is an increasingly salient phenomenon that ‘Christian fever’ has taken hold in the working-class communities in Shenzhen. The culture of Christianity, such as fellowships, Bible study classes, choir and Christmas celebrations, is increasingly popular among rural migrant workers, as it not only fulfils their spiritual needs but also provides an opportunity for leisure, relaxation and entertainment beyond the highly exploitative labour regime. Therefore, it is no wonder that a growing number of rural migrant workers have started to convert or engage in Christianity.

According to a 2014 report titled ‘Global Christianity’ released by the Pew Research Centre, there were at least 58 million Protestants in China in 2010. The figure had increased almost tenfold since China’s economic and political reforms in the late 1970s. It is generally believed that the majority of Chinese Protestantism is in rural areas, which the state’s surveillance finds difficult to reach and also due to the hardship and poverty of the Chinese countryside.

However, this scenario is beginning to be remapped, as hundreds of millions from the rural population have migrated to cities in search of a livelihood over the past three decades. This in turn has given rise to a distinctive social group: Christian migrant workers. Some of these are rural Christians who now participate in the urban churches or organise their own Christian congregations in the cities, while others are new converts seeking spiritual coherence.

Between 2015 and 2018 I conducted nine months of fieldwork in nine Protestant churches around Foxconn and other large factories, including underground churches and Three-Self Patriotic Movement (TSPM) churches. Interestingly, migrant workers, be they rural Christians or new converts, constitute a major proportion of the churchgoers of these urban churches, varying from 80–90 per cent.

There are many factors which contribute to the popularity of Christianity among migrant workers. First, the relatively relaxed political environment and the flexible implementation of religious policies in Shenzhen provide room for the growth of Christianity and in particular for evangelising migrant workers, although the religious policy has become increasingly tight since 2018. Nevertheless, the Shenzhen government still shows a certain tolerance towards evangelising and house churches.

Second, both house churches and TSPM churches tend to target migrant workers for their evangelising and social services. For example, one house church located next to Foxconn largely targets Foxconn workers in response to the 2010 suicide event. Foxconn workers constitute more than 55 per cent of the attendees at this church. These churches offer migrant workers social services and spiritual care in various ways. They provide migrant workers with a ‘comfort zone’ built on the Christian ethics of love, brotherhood/sisterhood and equality, which contrasts with the coercive management and excessive workloads at Foxconn.

Apart from spiritual pursuits, many Foxconn workers attend churches in search of relaxation and leisure. For many of these workers, one important factor that draws them back to the church after their initial contact is the musical culture and the beautiful impressions of the choir and singing. Some of these churches even organise regular singing and dancing classes for migrant workers. Through participating in the church activities, many Foxconn workers establish a form of communal life and a sense of belonging which gives them some mental relief and enables them to negotiate the disciplinarian factory life.

Moreover, a few house churches around Foxconn even have an informal partnership with Foxconn’s ‘Care Centre’, an institution established to help with workers’ psychological problems. At Foxconn, workers can visit the Care Centre for a psychological consultation or call its hotline 78585 – the hotline phonetic equivalent in Mandarin is ‘please help me, help me’. However, the Care Centre cannot solve workers’ more significant psychological problems such as depression or sense of alienation; it is more likely to provide workers with a channel to complain, as one Foxconn manager indicated. Therefore it is common that Foxconn’s Care Centre will recommend or introduce workers suffering from depression to the churches to seek ‘spiritual therapy’.

Foxconn workers have been put under the spotlight over the past nine years, epitomising the human rights situation of Chinese factory workers. Although the working conditions of Foxconn workers have improved significantly, this does not seem to prevent the suicides from happening, according to a recent report. Therefore, the Chinese state still faces a challenging task if it is to address the ‘spiritual void’ of factory workers. Hence the Chinese state should show more tolerance for Christianity, since it may fill the gap in social services left by both the state and capitalism.

Quan Gao is a PhD candidate of Social Geography at Newcastle University, UK. His current work is on Christian migrant workers in Shenzhen.

Following the money: Political financing in Malaysia
Religions: Restrictions and reality in China