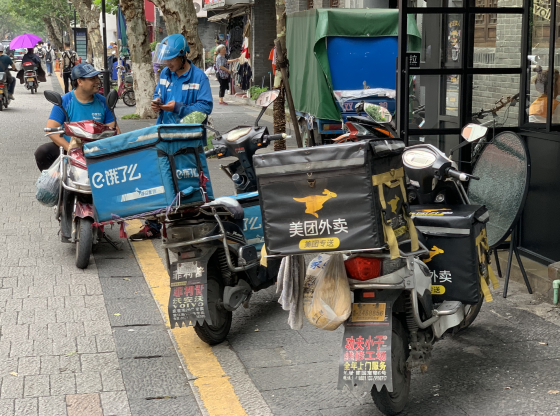 In 2015, the Premier of the People’s Republic of China (PRC) Li Keqiang unveiled the ‘Internet Plus’ policy which would include e-commerce as ‘a new engine for economic growth’. The platform economy in China has surged due to the development of computing power and information communication technologies (ICT) in recent years.

In 2016, the transaction volume of the e-commerce industry in China exceeded 20 trillion yuan, with 710 million internet users and an internet penetration rate of 51.7 per cent. As of June 2017, three of the ten most important global platform businesses come from China (Baidu, Alibaba and Tencent, the Chinese ‘BAT’). Today, the platform economy has become a key economic pillar of China and is a catalyst for its economic transition from an industrial economy to an internet-based service economy.

Platform work, with its promise of relatively easy earning, profitable entrepreneurship, autonomy and flexibility at work, has a perceived ‘new spirit’ within the ‘Internet Plus’ economy today

According to the American magazine Foreign Policy, China has the largest platform economy in the world. There are over 110 million platform workers in China, including drivers, pet-sitters, house cleaners, couriers, etc., who account for 15 per cent of the total workforce (compared with 10 per cent in the United States and 4.4 per cent in Britain). This army of platform workers is made up in large part of military veterans and low-educated migrant workers who have been laid off by factories.

Taking Didi (a Chinese version of Uber) as an example, only 3 per cent of its drivers in Shanghai are local citizens. Similar statistics characterise Didi’s business in other first-tier cities such as Beijing (10 per cent). This migrant workforce is known as the ‘grey economy’ by the Chinese media, because it is not recognised by the government and is often regarded as comprising the ‘low-end population’ (diduan rankou, 低端人口) in policy documents.

Within this multi-billion business, the ‘BAT’ have invested enormously in the market and in human capital. These companies provide a variety of O2O (online-to-offline) services in China, including general deliveries, ride-sharing, food delivery, groceries shopping, housework, housing agencies, etc. and reaching into every aspect of socioeconomic life. However, despite its significant contribution to the economy, there is little information about the platform workforce in China, including its size, demography, job quality or workers’ well-being.

This ignorance is attributable in part to the current policy framework in China, in which platform labour is not considered a formal employment status. Compared with other economic pillars (e.g. the automobile industry), workers in the platform economy are a topic rarely mentioned in the government’s policy documents or in the academic literature. Therefore, migrant workers who work in the platform economy fall into the ‘double-indeterminate’ category.

Migrant workers in the platform economy

Contemporary interest in platform labour is preceded by a more established scholarly concern over non-standard employment (e.g. self-employment, freelancers) and the online labour market. One recurring theme of discussion in this area is whether or not this growth in market-mediated online employment has made work more exploitative and precarious. Previous literature demonstrates that migrant workers in China have experienced a high level of precarity and exploitation for decades. This is particularly the case for those who are in informal employment.

According to the Chinese labour network China Labour Bulletin, there are over 280 million migrant workers in China, representing more than one-third of today’s total working population. Regarded as ‘second-class citizens’, migrant workers suffer from poor employment conditions, employment instability, low wages and a lack of social security. Because of the Household Registration system (hu kou, 戶口) in the PRC, migrants who are not registered with local governments often work as day labourers without any formal written contract or legal protection.

The relatively low-education background of these workers has forced them to seek jobs in the manufacturing, logistics, coal mining or construction industries. Many of these jobs have exposed workers to hazardous environments, causing accidents and even death at work. In her case study of worker abuses, Anita Chan described migrant labour in China as one of the most exploitative labour regimes in modern world history.

Platform work, by contrast, with its promise of relatively easy earning, profitable entrepreneurship, autonomy and flexibility at work, has a perceived ‘new spirit’ within the ‘Internet Plus’ economy today. However, research has revealed that this promise remains unfulfilled in reality. Some researchers suggest that the rise of the platform economy has in fact generated a new form of precariousness and commodification of labour and led to a rise in concerns for workers’ rights and employment regulations.

As Chinese scholar Ping Sun argues, one powerful critique that reveals the stringent algorithmic control and exploitative working conditions in the platform economy is the case of deliverymen in Beijing, who constantly experience asymmetrical power relations and inequality on their respective platforms (e.g. no control over working time and delivery time, emotional regulation, and ‘customer supremacy’ in relation to delivery work). Whilst these themes appear to be similar to the algorithmic labour control in the global North, Sun also discovered how deliverymen in Beijing game the algorithms by redistributing their orders between colleagues and sharing information and delivery tactics within their internal social media community.

Meanwhile, a paper by legal researcher Hui Yu, briefly introduced the punishing mechanisms of platform work in China. These differ from the West, in that platforms in China exercise a powerful system to punish or penalise ‘ineffective’ workers. Again using Didi as an example, the company will send checkers as ‘secret passengers’ to inspect the service of drivers. If the driver fails to fulfil the company’s expectations, Didi will decrease the number of orders assigned to the driver or even deactivate his account. Such punishing mechanisms also exist in platform delivery services, as reported by local media. If the worker violates a platform’s regulations, a penalty will be applied to his pay (e.g. late delivery: 5 RMB for 10 minutes; arguing with customers: 50 RMB, etc.).

Both Sun and Yu’s work highlight the importance of workplace localisation in studying platform labour and technology, and the need to reconceptualise the political and sociotechnical meanings of platform economies, particularly in the context of developing countries. In some Asia-Pacific countries like the Philippines, Malaysia and China, technology-mediated labour, including platform work, is perceived ‘as the best future of work’. However, as economic transitions have begun taking place in these countries, more in-depth studies are needed to provide an evidence-based reflection on this political rhetoric and to critically examine its policy implications.

This article was presented at the British Postgraduate Network for Chinese Studies Annual Conference 2019 at the University of Cambridge (8–9 June) and the Migrants, Minorities, Marginalisation (M3 Dialogue). The author would like to thank the audience for their feedback.

Hong Yu Liu is a PhD student at the University of Cambridge, Department of Sociology. His doctoral research studies the impact of artificial intelligence on work in China.

The long read: Why was Kashmir special?
Yet another assault on Kashmir