Fishing in troubled waters: Defence status as an explanatory factor for Duterte’s soft stance in the West Philippine Sea 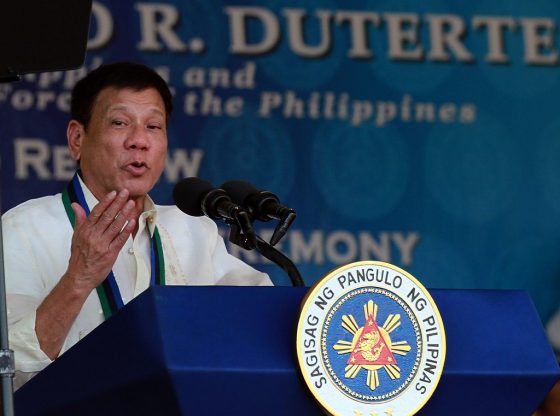 In July 2016, the verdict which went in favour of the Philippines in the case it brought in the Permanent Court of Arbitration (PCA) against China’s claims in the South China Sea (SCS) and the West Philippine Sea (WPS) created big waves in these disputed waters.

However, since that verdict, the changing tide in the conflict has not come about through the increased sway of international law, as anticipated. Rather, it has been swelled due to the unexpected diplomatic sail towards China by the new captain of the ship named ‘Philippines’, President Rodrigo Duterte. The 180 degree turn in the Philippines’ foreign policy away from the United States and towards China seems to have been a pragmatic move in the interests of economic concessions and security considerations, and it did indeed calm tensions in the West Philippine Sea for a short while.

Then, in June 2019, as the Philippines was about to commemorate its historic win in the PCA, a Chinese vessel ran over and sank an anchored Filipino fishing boat near Recto Bank within the Philippines’ exclusive economic zone (EEZ). After the incident, the Chinese vessel left the scene without rendering assistance to the 22 Filipino crew members in the sea. A year before, in June 2018, destructive illegal fishing and poaching activities by Chinese nationals in Scarborough Shoal had been reported by the Filipino fishing community as posing a grave threat to its economic security and the country’s marine resources.

At the height of media outrage over a Chinese vessel’s ‘ramming’ of a Filipino boat near Recto Bank on 9 June 2019, President Duterte’s reticence sent a clear and consistent message: the Philippines is not ready to confront China

Against a backdrop of unresolved issues concerning China in the West Philippine Sea, top Philippine officials from the departments of defence and foreign affairs have criticised Chinese behaviour in regard to the Recto Bank incident as a deliberate manoeuvre which displayed an utter disregard for the safety of life at sea. Domestic political activists condemned the harassment and also censured Duterte’s inaction on the sinking of a Filipino boat in Philippine waters.

Despite the diplomatic protest of his foreign affairs secretary and pressure from the opposition, the President was unperturbed about his stance on the West Philippine Sea. He downplayed the maritime incident and dismissed the call to arms to protect and defend the Philippines’ sovereign rights in the contested sea. Instead, he talked about staying out of trouble with China and getting real about the country’s military capability. Duterte’s rhetoric may have blown his armed forces out of the water, but the stark realism of his reasoning brings to the surface the relation between defence capacity and foreign policy.

The popular demand for a strong stance in this maritime dispute is driven by national pride, constitutional principles, security interests and international law. However, these arguments fail to include the critical measure of a country’s strategic position, and for Duterte, the Philippines’ defence status is a realistic determinant of his soft stand in the sea row.

In light of this, I believe that we can conduct an  insightful policy debate by asking the following questions:

– How does the Philippines’ defence posture serve as an explanatory factor for Duterte’s soft policy stance vis-a-vis China in the WPS dispute?

– How can the application of offence-defence theory in the study of national and international security explain Duterte’s prefernence for avoiding conflict with China following the Recto Bank incident of June 2019?

– How can this structural realist theory of security illuminate key areas of concern in regard to Philippine defence and foreign policy?

At the height of media outrage over a Chinese vessel’s ‘ramming’ of a Filipino boat near Recto Bank on 9 June 2019, President Duterte’s reticence sent a clear and consistent message: the Philippines is not ready to confront China. Duterte held back from his usual fiery oratory while his defence and military officials raised the alarm over what they assessed as an intentional – and therefore condemnable – act by the Chinese in the territorial waters of the Philippines.

When he finally broke his silence to quell the squabble, the President – in his role as Commander-in-Chief – addressed the Philippine Navy’s anniversary celebration on 17 June 2019 with a warning against sowing tension with China over ‘a little maritime incident’. He encouraged the Navy to stay out of trouble, saying they simply cannot afford to go to war with China.

Duterte then lashed out at his critics who had called for tough measures in defence of the Philippines’ sovereign rights in the EEZ. He told the Navy not to believe ‘dumb politicians’ who want to send a fleet to stop China from fishing in the area. He also said he is not so stupid as to start even a small war in the hot water, especially against a nuclear power, as this could mean ‘the end of everything’.

In his State of the Nation Address on 22 July 2019, the President talked about the ‘delicate balancing act’ needed to avoid armed conflict in the West Philippine Sea and to protect the country’s territorial waters and natural resources at the same time. He lamented that the Philippines had lost effective occupation of Scarborough Shoal when its Navy retreated in a standoff with China, long before his presidency.

Once again, Duterte’s candour about his country’s naval capability brought the national defence position in the West Philippine Sea into full view. Duterte said there is no way he can use the Navy and the Marines to drive away Chinese fishermen who are already in possession of what the latter claim as their property. If he were to do so, he claimed, ‘not one of [his soldiers] will come home alive’. Duterte is still the most trusted government official in the Philippines, according to a July 2019 survey, and he expressed his firm resolve to deal with the WPS issue through quiet diplomacy and bilateral negotiations.

In a 2017 analysis of security dynamics in the South China Sea following the PCA decision, I explained how diplomatic engagement and negotiated agreement between the Philippines and China could serve as a balancing act in a reinforcing cycle of tension caused by the increased military presence of rival powers in the South China Sea. Through causal loop diagrams, I discussed the role of diplomacy in defusing the strategic misperceptions of security actors and the role of the military in deterring offensive actions against each other.

This policy argument was framed within a constructive-realist paradigm, which I explained as comprising a comprehensive view of the constructed ideals and interests of the countries involved and the strategic realities in a militarised maritime area. From there, we can now zoom in closer with the theoretical lens to study the structural component of the realist dimension: the offence-defence balance.

Offence-defence theory, as devised by Charles Glaser and Chaim Kaufmann, refers to a country’s relative power and strategic skill to effectively deploy the military in order to successfully attack, deter or defend. The rate of success is determined by the net assessment of a state’s military capability and resolve vis-à-vis that of another on the opposite side.

Developed from a structural realist worldview, the offence-defence theory works on the assumption that external and systemic forces determine the behaviour of states, and that they make decisions that are rational, optimal and, at times, opportunistic. Given this explanation, it can be deduced that President Duterte’s decision to opt for conflict avoidance is both reasonable and practical. However, the value preference for survival of a weak state with no capacity for defence comes at a high price.

Robert Jervis, in discussing deterrence theory, argued that the absence of defence invites disaster. If an opponent displays weakness after being tested on small issues by an aggressor, the latter will simply press harder. But if the defender cannot be bullied, the other side will try to increase values and interests through peaceful and cooperative means.

Considering that military capability is a given structural reality, what a weak state can do – as a rational security-seeking actor – is to find strategic shelter through defence alliances and partnerships with major powers. Security cover checks aggression and balances the power distribution in the region. This is especially true in the case of the Philippines, which as I have previously argued, manifests the ‘small state security syndrome’.

The strategic value of military modernisation and defence cooperation should inform the current political debate on Duterte’s policy stance in relation to the West Philippine Sea. Aside from diplomatic constructions and/or legal-institutional foundations, a defence build-up with allies and security partners is necessary for a stable and rules-based international order. Hence, a deeper understanding of the defence argument can help the Philippine government make better decisions on how it can leverage the PCA’s ruling and manage fishing in troubled waters.

Ananda Devi Domingo-Almase, DPA is Professor III in the National Defence College of the Philippines (NDCP) and the Course Director for the National Security Policy and Strategy Module in the Master in National Security Administration (MNSA) Programme of the NDCP. The views expressed in this article are hers alone and do not reflect the opinion and position of the NDCP nor of the Department of National Defence that supervises the College.