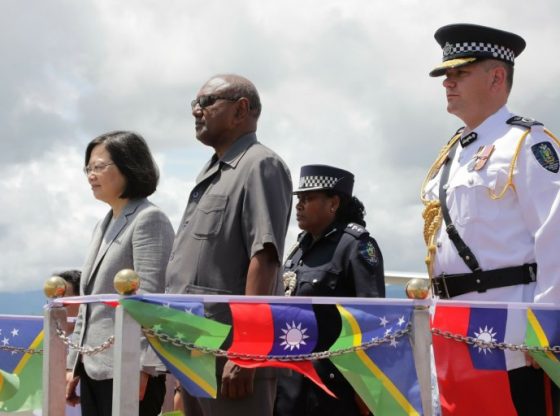 Image credit: President Tsai ready to depart from the Solomon IslandCross by the Office of the President, Republic of China/Flickr, license CC BY 2.0

Taiwan faces increasingly powerful and complex challenges to its formal diplomatic relations. China’s economic incentives, including aid packages and the allure of the Chinese domestic market, coupled with growing political clout, provides considerable leverage to persuade countries to break relations with Taiwan. Furthermore, when China unilaterally ended the so-called diplomatic truce with the election of Tsai Ing-wen, China has been increasingly willing to tie economic incentives and political pressure to persuade holdouts to switch recognition. Since 2016 five more countries have broken official relations with Taiwan.

Few Taiwanese know which countries still maintain formal relations with Taiwan, but how diplomatic relations are presented to the public seems to matter

Currently only seventeen countries maintain formal diplomatic relations with Taiwan. So how should Taiwan maintain these formal relations? Absent Chinese pressure, most countries would likely recognise Taiwan. However, China rejects the possibility that a country could recognise both China and Taiwan (dual recognition), even as evidence from the Germany example shows that dual recognition does not preclude China’s preferred outcome of unification. Taiwan thus must focus on countries willing to forego the incentives of relations with China while finding avenues to cement relations with Taiwan.

My own research depicts the uphill battle Taiwan faces. Unable to measure directly Taiwan’s international assistance to countries, I relied on publicly available information. Taiwanese officials may emphasise shared values, especially as most of their partners are at least nominally democratic. Yet most stable democracies have long since recognised China instead. My analysis of diplomatic recognition from 1950-2016 shows the extent to which economic factors influence recognition. In particular, countries that are export-driven economies and those with a higher debt to GDP ratio are less likely to recognise Taiwan. My findings suggest that even Taiwan’s aid efforts, which often target economic development and the development of exports, may contribute to a country ultimately breaking relations. Taiwan’s historical successes in Central America deserves greater attention as potential lessons for other regions. Taiwan’s ability to embed itself in the political and economic institutions of Central America arguably raised the costs of breaking formal relations and allowed Taiwan to more effectively coordinate its diplomatic efforts.

Any advice on maintaining these diplomatic partnerships must acknowledge that China has altered its strategy over time, as China is now far more willing to use carrots and sticks to influence countries. Such advice must also recognise that countries may have incentives to publically suggest a diplomatic switch is imminent. For example, in early June, the foreign minister of the Solomon Islands stated that his country would decide on the maintenance of diplomatic recognition of Taiwan within a hundred days, providing the opportunity for both China and Taiwan to increase their offers of aid packages. Both Taiwan and China decry so-called “dollar diplomacy” and Taiwanese administrations may legitimately oppose such efforts. But these protests do little to discourage countries from inciting bidding wars, nor discourage countries from potentially switching recognition back and forth between China and Taiwan according to economic incentives.

Formal diplomatic partnerships provide several advantages besides just their symbolic importance in maintaining Taiwan’s sovereignty. However, Taiwan cannot afford to play “dollar diplomacy” with China in the long-term, nor expect diplomatic partners to ignore the political and economic ramifications of not recognising China. Rather, Taiwan may be able to stabilise its diplomatic relations by appealing to concerns about China’s growing regional presence. For example, the US and Australia, by coordinating assistance towards Taiwan’s Oceanic partners, could raise the costs for a country switching to China. This coordinated effort could be achieved without solely burdening Taiwan with the costs of increased aid. Likewise, the US could tie future aid to Taiwan’s Central American and Caribbean partners to the continuation of recognition. Moreover, Taiwan’s diplomatic strategy should attempt to blur further the distinction of formal and informal diplomatic relations, enhancing relations not only with the US, but also regional powers (e.g. Australia, Japan). Doing so potentially blunts the impact of discontinuing formal relations and also provides Taiwan greater security against China’s attempts to further isolate Taiwan.