Taiwan and the Vatican: Relations from Past to Near Future

Home /China-Vatican, Religion, Taiwan/Taiwan and the Vatican: Relations from Past to Near Future 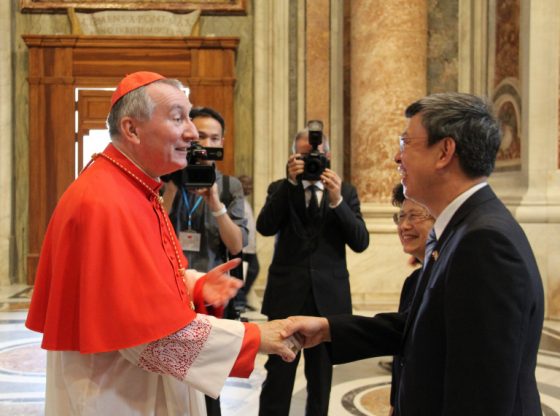 Image credit: Vice President Chen expressed regards to Vatican Secretary of State Card. Pietro Parolin by the Office of the President, Republic of China/Flickr, license by CC BY 2.0

During the last five years relations between the Vatican and the People’s Republic of China (PRC) have developed at a dramatic pace. Many observers have been surprised at this series of events, even questioning whether the Holy See and PRC will normalise relations in the near future. Since the number of countries officially recognising the Republic of China (ROC) in Taiwan has fallen from 22 to 17 in the last two years, the Vatican-PRC diplomatic warming has caught Taipei’s attention and contributed to concerns of a diplomatic crisis. In this article, I briefly present Vatican-ROC relations past and present, then speculate on future developments by considering the impact of Vatican-PRC negotiations.

The Holy See does have concerns about social issues in Taiwan, such as abortion, the death penalty, and since 24th May 2019 the legalisation of same sex marriage

Relations between the Holy See and the ROC can be traced to the Sino-Japanese war (1937-1945). The nationalist government of Chongqing was in a diplomatic race with Japan to establish official ties with the Holy See, in which Japan succeeded in March 1942 and China in October. These two countries sent their ministers to the Holy See, but to avoid causing diplomatic tensions during wartime, China’s representative remained an apostolic delegate.

After the PRC was founded in 1949 and the ROC relocated to Taiwan, Vatican diplomat Internuncio Antonio Riberi was expelled from the former capital Nanjing in September 1951 and moved to Taipei one year later. The Papal mission in Taipei was in 24 December 1966 upgraded from Internunciature to Nunciature and that status still persists today. However, since the PRC replaced the ROC at the UN, the Nuncio left Taipei and the more junior Chargé D’affaires has led the Taipei Nunciature. The Vatican’s reassignment of its representative is indicative of its concerns for the Catholic Church in the PRC and its relations with Beijing. Since 1949, the Pope has for these reasons declined invitations to visit Taiwan for pastoral trips.

This reorganisation does not mean Vatican-ROC relations have been downgraded or that Taiwan is no longer of concern to the Vatican. The ROC government has always upheld guarantees of religious freedom in Taiwan and all members of the Catholic Church in Taiwan are loyal to and in communion with the Pope. Vatican–ROC relations remain solid on the basis of liberty, transparency and friendship. Several high-ranking Holy See dignities continue to visit Taiwan for pastoral trips. For instance, Archbishop Giampietro Dal Toso, Adjunct Secretary of the Holy See’s Congregation for the Evangelisation of Peoples and President of the Pontifical Mission Societies, visited Taiwan to preside at the Pontifical Mission Societies Asia Continental Meeting held in Taipei, February 2019. In March, the Prefect of the Congregation of the Evangelisation of Peoples, Cardinal Fernando Filoni, was sent by Pope Francis as legato to preside over the 2019 Eucharistic Congress of Taiwan held in the Diocese of Chiayi.

However, the Holy See does have concerns about social issues in Taiwan, such as abortion, the death penalty, and since 24th May 2019 the legalisation of same sex marriage. The Holy See and the Catholic Church in Taiwan need to organise forums with the Taiwanese authorities and people to promote discussion on these difficult issues. A deep and sincere dialogue is needed for the Taiwanese Catholic Church to express Catholic values.

Taiwan’s government has reason to confidently promote its freedom of religion on the international stage. A Taiwanese delegation attended the 2019 Ministerial to Advance Religious Freedom, the second such conference held by the US Secretary of State to promote religious freedom for all and produce durable, positive change. While the ROC’s diplomacy extends its reach through US humanistic diplomacy, these instruments tend to stir US-PRC tensions. However, we still need to further observe how these actions will affect PRC-Vatican relations.

Pontifical diplomacy has double-sided concerns: to provide pastoral care for the development of local Churches in each country and evangelise in favour of human dignity, justice and world peace. One of its priorities is to preach the Gospel and increase the number of believers. The small size of the Taiwanese Church can only weaken the ROC’s stake with regard to the Holy See, so all the members of this Church bear responsibility to contribute to Taiwan’s diplomatic significance.

Another factor affecting Vatican–ROC relations is Vatican–PRC relations. Previously PRC relations were limited to the Chinese Patriotic Association and the ordination of bishops. Only time will tell whether these ongoing negotiations will lead somewhere new or just another dead end. Nevertheless, this is a crucial moment for Vatican–PRC–ROC relations: the first anniversary of the temporary agreement is approaching, and the time has come for evaluation. The Bishop See of Hong Kong is still vacant and the active role of some Catholic prelates in Hong Kong protesting against the proposed extradition law is a delicate factor in the Holy See’s evaluation of candidates to the episcopacy. The Chargé D’affaires in Taipei, Mgr Sladan Cosic, has left Taiwan and his successor, Mgr Arnaldo Catalan, started his function on the 10th of August, 2019. The pieces for this chessboard are still being reorganised; a new era of these triangular relations will soon begin.

Alexandre Tsung-ming Chen is a researcher at Ferdinand Verbiest Institute, KU Leuven, Belgium. The views expressed are author’s opinion and do not represent the position of the institute.

Resurgent India removes the curse of Kashmir
The Turkish Understanding of “One China”: Turkey’s Delicate Policy Balance between Taiwan and China