What Brings the US and Taiwan Close Together? 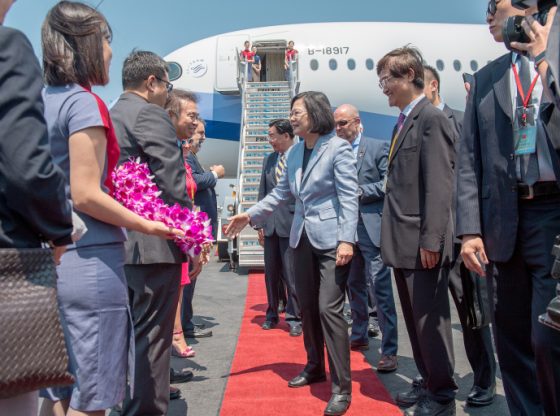 Image credit: President Tsai arrives in the United States by the Office of the President, Republic of China/Flickr, license CC BY 2.0

“It is time for the US to abandon Taiwan.” The past decade has frequently seen influential scholars and experts on US-China relations propose this sort of argument. Ten years ago, Bill Owens suggested that America should start treating China as a friend and therefore halt its arms sales to Taiwan and review the outdated the Taiwan Relations Act (TRA). Bruce Gilley sold an idea of “the Finlandisation of Taiwan” in Foreign Affairs in 2010. In 2011, Paul Kane went so far to put forward a grand bargain with China: the termination of the US defense relationship with Taiwan in exchange for China writing off American debt. Two prominent Australian scholars, Brendan Taylor and Hugh White, promoted the latest iteration of this argument. While Taylor argued that the US needs to start “easing off” on Taiwan because the scale of military power over the Taiwan Strait is slowly tipping towards China’s favour, White sharply asked—is the status quo in Taiwan worth a global economic collapse or nuclear exchange? Although the specifics regarding how and why the US should abandon Taiwan sometimes varies, the core of the arguments remains: it is time for the US to scale back its long-held security commitment to Taiwan.

Ten years have since passed and US-Taiwan relations are growing stronger and closer than ever. Many signs show that US-Taiwan ties have entered a new era wherein the US gradually treats Taiwan as an independent country and indispensable ally. For example, US officials and congress members now often publicly refer to Tsai Ing-wen as “President of Taiwan.” Moreover, US National Security Adviser John Bolton met his Taiwanese counterpart David Lee in Washington in May, a move unprecedented since the US severed its diplomatic recognition of the Republic of China on Taiwan in 1979. In the 2019 Indo-Pacific Strategy Report, Taiwan is listed as one of four “countries” upholding the rules-based international order where the US has a vital interest. The most telling evidence is these recent two open letters to Donald Trump. Despite the fundamental difference in how they propose the US address China’s increasingly assertive behaviour, neither of the letters touches the idea of lessening US-Taiwan relations. The trend that the US is gradually strengthening its security commitment to Taiwan is too obvious to ignore. Why are US-Taiwan relations taking a direction completely different from what many predicted?

Some may argue that Trump is playing the Taiwan card to force China to concede on other issues. This answer is partially correct. Indeed, the Trump administration has increased the speed, scale, and range of its ties with Taiwan. But if Trump was the only factor, why has Trump not ‘played the Taiwan card’ by exchanging the US defence commitment to Taiwan for China backing off on other issues, such as the South China Sea? Why have US-Taiwan relations not followed this path?

Three factors can explain the gap between this “Taiwan abandonment argument” and reality. First of all, pundits supporting this argument often operate under a flawed assumption that the US president, or the executive branch in general, can easily dictate US foreign policy. Congress usually functions as a stabiliser of US-Taiwan relations, keeping US foreign policy towards Taiwan from drastic changes. For example, the original version of the TRA as drafted by the Carter administration had only three sections. However, Congress closely cooperated with the Taiwanese government and Taiwanese Americans to expand the TRA to 18 sections, making it comprehensive enough to protect Taiwan from falling into China’s control. Today, the primary source of support for the US-Taiwan relationship remains in Congress.

The second important driver moving forward US-Taiwan relations is the Formosan Association for Public Affairs (FAPA). Founded in 1982, FAPA is a non-profit organisation aiming at protecting and strengthening US-Taiwan relations. Most FAPA members are first and second generation Taiwanese Americans living throughout America, which means that the 3000 FAPA members are voting constituents of members of congress. FAPA members make requests to which local congress members must constitutionally respond. Through decades of grass roots connection with Congress, FAPA has contributed to the completion of a series of important pro-Taiwan resolutions and bills. The most recent is the Taiwan Travel Act, which has great potential to raise the US security commitment to Taiwan to a new level. FAPA remains one of the most powerful lobby groups in Congress. Any assessment of US-Taiwan relations would be incomplete without considering the role of FAPA.

Finally, US resolve for maintaining international order based on freedom and democracy cannot be underestimated. Many believed the US would choose to withdraw from Asia when faced with China’s growing material power and proactive behavior, but that is not how the US has written its history. The US sacrificed approximately 500,000 men to fight against Germany in two world wars and rivaled the Soviet Union for 45 years in arms races and proxy wars until the latter collapsed. On what basis can one safely assume that the US will back off when China, without any actual ally except for North Korea, is challenging this US-led order? When US leaders refer to the importance of Taiwan, democracy is often the keyword. For instance, in his remark at the Hudson Institute, Vice President Mike Pence said explicitly “America will always believe Taiwan’s embrace of democracy shows a better path for all the Chinese people.” Secretary of State Mike Pompeo also emphasised, “America will always believe Taiwan’s embrace of democracy is an example to be internationally supported.” Taiwan embracing democracy is the essential reason the US will maintain strong relations with Taiwan.

Taiwan’s geostrategic location and US credibility are certainly also important factors for considering the US-Taiwan relationship. In fact, these two factors have since 1949 had a profound influence on how US military leaders perceive the value of the island. Together, these five factors are mutually strengthening and propelling forward US-Taiwan relations. When asked in a press briefing in May whether the US will defend Taiwan, Assistant Secretary of Defense for Indo-Pacific Security Affairs Randall Schriver explicitly said,  ”I think our history is clear:  When Taiwan has been threatened, the US has responded in an appropriate manner to help support Taiwan.  So I think in the future, if we were to — I think it could be well-expected that we would want to see Taiwan be able to preserve its — its status, free from coercion.” Thus, it is time to stop arguing for the US to abandon Taiwan.

Yu-Hua Chen is a Lecturer in the School of Politics and International Relations at the Australian National University, with particular expertise in Chinese foreign and security policy, international relations theories, and the history-security nexus in the Asia-Pacific region. He tweets at @YuHuaNealChen