Are we witnessing a paradigm shift in Pakistan’s politics? 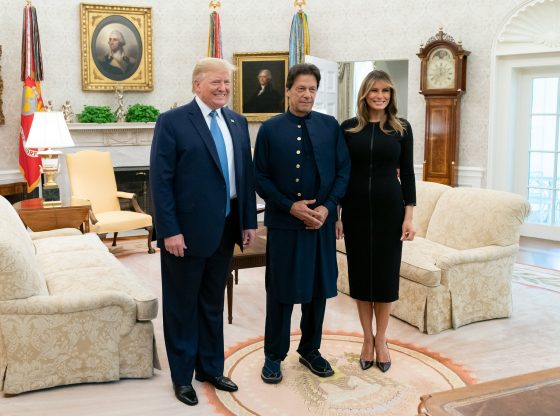 According to a political survey conducted by Gallup Pakistan, the popularity of Prime Minister (PM) Imran Khan has fallen sharply after his first 12 months in office and following the passage of the annual budget.

The PM’s rating fell from 58 per cent in April 2019 to 45 per cent in July – a significant drop of 13 per cent in just two months. However, the survey also stated that despite the downward popularity of the ruling Pakistan Tehreek-e-Insaf (PTI) due to the International Monetary Fund (IMF) programme and sharp rises in the prices of essential commodities, the PTI has nonetheless maintained its edge as the largest political party.

A paradigm shift in politics still requires a push, but will such a change relieve the people from their economic malaise?

Are we witnessing a paradigm shift in Pakistan’s political scenario? Is there a possibility of the Pakistan People’s Party (PPP) and the Pakistan Muslim League (Nawaz) (PML-N) coming to power again? Has the PTI’s inept mode of governance provided space for the political rehabilitation of the two major opposition parties? Is former president Asif Ali Zardari’s prediction of Imran Khan’s government coming to an end in four to five months’ time based on political acumen or mere speculation?

The legitimate way to remove Imran Khan from office is to launch a vote of no confidence in the National Assembly, provided the opposition parties can cause a dent in the rank-and-file of the coalition government in order to achieve the required number of votes. The possibility of dislodging the government through street agitation also exists, but this could result in driving the country towards anarchy.

While one can have some reservations about the Gallup survey (and it could also include a margin of error), the prevailing political environment in Pakistan may indeed indicate a paradigm shift away from the ‘PTI wave’ of July 2018 to the ‘opposition wave’ in July 2019.

This is not simply because of the failure of the PTI government to provide relief to the people buried under multiple economic hardships; its inability to run parliament in an amicable manner is also a major issue. If the PTI’s performance over the past year had been better, the opposition would not have been able to mobilise people on the streets or exploit the PTI’s fragile majority in the National Assembly and its insignificant minority in the Senate in order to exert pressure on the government.

The paradigm shift is possible for three main reasons. First, resentment against the PTI government has grown during the last two to three months due to unpopular changes such as the depreciation of the rupee vis-à-vis the US dollar and other foreign currencies. Whereas before the elections in July 2018 one US dollar was worth Rs122, now it is at Rs160. This has led to sharp rises in the prices of essential commodities.

The prices of gas and electricity, for example, have almost doubled in the past year, with the price of compressed natural gas (CNG)  increasing from Rs102 to Rs123 per kilo at the beginning of August 2019. The prices of roti and naan doubled from Rs6 and Rs10 to Rs12 and Rs20, respectively, and the cost of other essential commodities as well as public transport have also increased over the past two months.

All this is eroding the government’s popularity. Indeed, no government has experienced such a rapid decline in popularity in such a short timespan as the PTI. Imran Khan’s promises to eradicate corruption and nepotism, establish the rule of law and provide relief to the common people have failed to materialise.

Second, people no longer accept the PTI’s claim that the PPP and the PML-N are responsible for the prevailing economic malaise and crisis in governance. People are right to argue that the PTI knew about the country’s economic situation, corruption and gap in the balance of payments long before the 2018 elections.

Imran Khan assured voters that his team was working to introduce the right kind of economic reforms to rid the country of foreign aid by utilising the country’s resources, yet there has been no qualitative improvement in the socioeconomic condition of the people. Instead, the purchasing power of an ordinary person has never been so low in the history of Pakistan. The PTI government has sought international loans of $10 billion, including $6 billion from the IMF and $3 billion for providing oil on credit.

Third, there are some within the PTI’s ranks who are highly dissatisfied about how the economic crisis is causing deep unpopularity for the party amongst the people. There are concerns about the competence and calibre of the PM. The team which originally formed the PTI and went through a rigorous process of seeking popular support is now almost gone, and the party primarily comprises those who joined the bandwagon a few years ago, when it was predicted to be the third force that would come to power in the next elections.

If the PTI is facing internal dissent and the real wielders of power decide to ditch Imran Khan because of his growing unpopularity, the outcome will be either fresh elections or a vote of no confidence against the PM. A military takeover may not be possible because of the obvious internal and external implications.

Such a paradigm shift in politics still requires a push, but will such a change relieve the people from their economic malaise? Simply changing the faces at the top will not result in any qualitative amelioration of the country’s declining socioeconomic conditions. The people tested the PPP and the PML-N for three decades, and both these parties have been held responsible for the country’s current economic problems.

The retirement of Asif Ali Zardari and Nawaz Sharif – former leaders of the PPP and the PML-N, respectively – will pave the way for their successors, Bilawal and Maryam, to play a leading role in the country’s politics. But will either of those two parties, each representing dynastic politics, actually benefit the people of Pakistan? During his long political struggle, Imran Khan used to remind people that if they did not break the monopoly of the PPP and the PML-N, then future generations should be prepared to be slaves to the children of Zardari and the Sharif brothers.

One year after the general elections, we need to analyse the extent to which the third force has broken the monopoly of the PPP and the PML-N and changed the political culture of Pakistan. Are the people better off in ‘Naya’ Pakistan, or were they better off before?

The PTI government is credited with launching a rigorous accountability drive, controlling expenditures, reducing the current account deficit and bringing non-filers under the tax net. But the same government is also known for taking U-turns on several policy matters and has been criticised for dealing with issues relating to traders and the opposition in a non-professional manner.

On principle, the paradigm shift in Pakistan’s electoral politics should come after five years, once the government’s term has been completed. However, critics argue that the changes experienced during just one year of the PTI government have been so painful that if they are allowed to remain in power for another four years, they will wreak havoc on the people.

It is a pity for Pakistan that, unlike other countries which have towering personalities who can influence and manage political crises, it lacks such political or social figures to advise the government in setting its priorities, or at least act as a buffer between the opposition and the government in their standoff.

Dr Moonis Ahmar is former Dean Faculty of Social Sciences and Meritorious Professor of International Relations at the University of Karachi, Pakistan.

*This article was originally published by The Express Tribune and has been republished with the permission of the author.

Beijing’s Rise and Taiwan’s Decline in Africa: What Does the African University Tell Us?
Is Han Kuo-yu a Populist?