The Youth Ambassadors and Taiwan’s Performative Cultural Diplomacy: “Some of the dancing, yeah, I don’t really understand [it]” 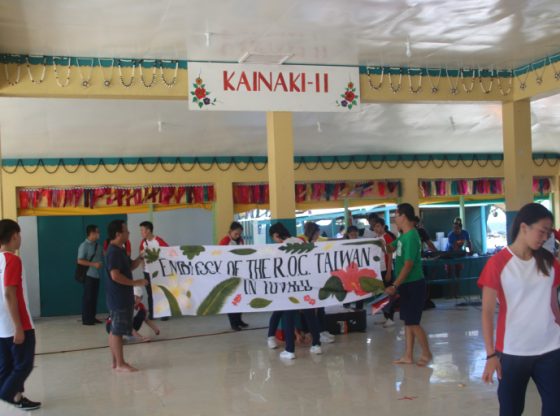 When I worked for the Tuvalu Embassy in Taipei in 2014, I attended a performance by Taiwan’s Youth Ambassadors (YAs). The event was hosted by the Ministry of Foreign Affairs and was part of an initiative under then President Ma Ying-jeou to strengthen Taiwan’s foreign relations using soft power. In 2014, the YA project centred on a 90-minute performance designed to meticulously present Taiwan’s culture(s) to audiences in foreign countries.

After watching the performance for the first time, I remember thinking: “Can a person who’s never been to Taiwan even understand this?” After re-watching a video of the performance numerous times for my PhD, my initial question still stands. However, I also began to wonder: “Taiwan and many of its diplomatic allies (including Tuvalu) have completely different performance venues. How does the YA performance even work abroad?” These questions represent major issues in Taiwan’s cultural diplomacy that reflect the domestic focus of this diplomacy and its problematic relationship with developing (and often allied) countries.

Taiwan’s Performative Cultural Diplomacy and the YA Program

Cultural diplomacy refers to a government using its country’s culture(s) to support foreign policy goals. Performative cultural diplomacy is when a country’s culture is communicated to other nations through performance/dance to strengthen ties. Taiwan has implemented performative cultural diplomacy since the 1970s at the very latest. In the 70s, the government instituted the Chinese Youth Goodwill Missions, which travelled abroad to performatively promote Taiwan after the Republic of China was replaced by the People’s Republic of China (PRC) at the United Nations.

The YA program is a more recent example of Taiwan’s performative cultural diplomacy. It began in 2009 after Kuomintang (KMT) President Ma Ying-jeou announced his viable diplomacy policy. Instead of fighting with the PRC over diplomatic allies like his Diplomatic Progressive Party (DPP) predecessor Chen Shui-bian, Ma wanted to establish a diplomatic truce with the PRC. As a result, cultural diplomacy became extremely important to Ma’s administration: it was a way to fortify diplomatic relations while highlighting Taiwan’s participation in internationally appropriate foreign affairs.

In the YA project, Taiwanese youth in Bachelor’s, Master’s, or PhD programs are sent to foreign countries for cultural exchange. From 2009 to 2013, the program was overseen by Taiwan’s Ministry of Foreign Affairs (MOFA) but run through universities, who selected students and professors to host short camps abroad. These camps frequently featured performance/dance. In 2009, the program cantered on Taiwan’s Pacific allies before later including all allies and then both allied and non-allied countries.

From 2014 to 2016, MOFA centralised the program. The ministry formed inter-university YA groups and sent each group to four or five countries or cities. Instead of hosting camps, YAs toured local organisations and Taiwanese aid projects in each country/city they visited and held 90-minute performances like the one I saw in 2014. Interestingly, after the 2016 election of DPP President Tsai Ing-wen, the YA program was not discontinued. Yet, it is now smaller, and YAs travel only to Pacific allies and countries included in Tsai’s New Southbound Policy.

Regardless of how the program has changed, however, two problems are notable and have reduced the project’s effectiveness domestically and internationally.

Cultural (Mis)Representation in the YA Program

Because Taiwan’s culture is heterogenous, attempts to comprehensively represent it are bound to be contentious. For the YAs, this problem is clear in how the cultures of Taiwan’s indigenous peoples have been (mis)represented. For example, in the 2009-2013 program, YAs (who were often not indigenous peoples) included indigenous performance/dance in their exchange camps. However, they paid shockingly little attention to accurate representation. The domestic controversy this caused prompted MOFA to overhaul the program in 2014 so it could be more closely monitored.

Under Tsai Ing-wen, these problems have become more serious. Although MOFA invited youth from indigenous and other underrepresented groups to audition for the 2017 project, the only culture performatively represented in that year was Chinese culture. Performances by indigenous YAs were only added after some participants complained. Similarly, indigenous cultures were barely included in 2018 performances and were even confused with representations of Hakka culture.

Attention to cultural representation is critical to creating a more equitable Taiwan, especially given Taiwan’s settler-colony status. However, problems of cultural (mis)representation focus the YA project on the domestic sphere, suggesting that culture is an ineffective tool in Taiwan’s foreign affairs.

The YA Program’s Problematic Relationship with Developing Countries

Large-scale performances included in the 2014-2016 YA program also exemplify the project’s problematic relationship with developing countries, many of which are Taiwan’s allies.

When creating YA performances in Taiwan, directors and officials pay little attention to disparities between performance spaces in Taiwan and those in developing countries—like Tuvalu and other allies for instance. YA shows rely on performance spaces you would typically find in Taiwan: indoor theatres with lighting, sound, and projection capabilities, and promotional materials for the project emphasise that YAs must present performances exactly as they were rehearsed in Taiwan to achieve full effectiveness. However, YAs who have performed in Tuvalu (and other allied countries) note that Taiwanese-type theatrical facilities are rarely available in these nations. Developing countries that do not have the same performance venues as Taiwan become obstacles for YAs and their mission to faithfully present performances. In interviews, former directors for YA shows even referred to developing nations as “bad countries,” explaining that, if given the choice, they would not hold YA performances in those places.

Aside from concerns about cultural representation that make YA performances domestically oriented, performances are also rarely created with developing countries in mind, and the overall effectiveness of the program is questionable. In fact, after I researched how the YA project was implemented in Tuvalu, it became clear that the greatest beneficiaries of the program were YAs. In Tuvalu, YAs had a unique opportunity to better understand one of Taiwan’s allies while Tuvaluans did not seem deeply affected by YA performances.

Jess Marinaccio is a PhD candidate in Pacific Studies at Victoria University of Wellington in New Zealand. Her doctoral research focuses on performative cultural diplomacy between Tuvalu and Taiwan, but she has also written extensively on how indigeneity and diplomacy are conceptualised throughout the Pacific.