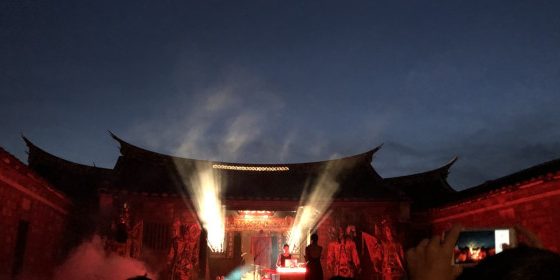 The Daxidaxi project seeks to rebuild the cultural and industrial networks and relationships of Daxi town, which was a transportation hub for tea, camphor, wood and other essentials. It aims to do this by cultivating the sustainability of local communities with cooperation in the form of public-private partnerships and enjoys continuing long-term support from these chambers of commerce.

Through the powerful influences of modernisation, Westernisation and urbanisation, younger generations’ attitudes towards temple culture seem to have shifted from religious folk beliefs to unique cultural symbols of identity

The project was initiated by Taiyuan City Daxi Wood Art Ecomuseum. As a local cultural public organisation focused on wood art, deciding to expand curatorship beyond its owned physical venues and spaces was an ambitious decision. By introducing fashion and graphic designers, lighting artists, sound technicians and contemporary dancers, the project team used design thinking to transform participant perception. The team wanted to bring these perceptions of worshiping rites in a Taiwanese temple to the next level and create traditional festival experiences of magnificent beauty shaped with contemporary influences.

Godkidlla (廖俊裕), the chief visual designer, is renowned for his previous works in 2016 London Design Biennale and his personal style inspired by Taiwanese street art. He uses neon lighting, often seen in urban Taiwan, as the main theme for this new version of the temple festival.

Temple rites, events and festivals used to be an important part of local life in Taiwan. However, through the powerful influences of modernisation, Westernisation and urbanisation, younger generations’ attitudes towards temple culture seem to have shifted from religious folk beliefs to unique cultural symbols of identity. The Daxida project team thus decided to engage these audiences in order to bring back to life temple traditions. Godkidlla’s approach of transforming the temple festival’s interface of cultural symbols into a fashionable design of urban phenomena has successfully attracted Taiwan’s urbanites, whom now account for 80% of the island’s population. The team also created the outdoor evening show “Gods’ Dance Night,” in the magnificent backdrop of an ancient monument, Lee Teng-fan’s Ancient Residence.

The Daxi temple festival celebration was more than solely a traditional Taiwanese performance of a sacrifice to the gods comprising glove puppetry and a god pageant. As a collaboration between the lighting artist Chiang Chi-Yang (江佶洋), sound technician Hsu Yen-ting (許雁婷), contemporary dancer Liao Yi-ching (廖苡晴), wind band Hot Tube Gang (哈管幫), and indie band Sorry Youth (拍謝少年), young artists created new languages and channels to connect with audiences. To quote a visitor’s post on Instagram, “tradition and modernism have been integrated seamlessly in this show”.

Behind the scenes of this modern adaptation there are many worthy stories to be told. For example, the project team was led by a talented project manager equipped with excellent communication skills and whose natural smile and positive demeanor eased tensions between stakeholders. Such soft skills have been undervalued in Taiwan when dealing with the conflicts in this field, but were especially welcome when negotiating event management blending tradition and modernity. In another case, costume designer Lee Yu-sheng (李育昇), listed in the World Scenography Book, was invited to this project to create specialised light and fashion costumes for local children. This initiative encouraged young generations to join the organisation of major god pageant, the heavy and sweltering costumes of which are traditionally thought to repel younger generations.

The Daxidaxi project implemented a rebranding strategy by renaming the traditional Daxi District’s birthday celebration for the god Guan Yu. The name ‘Daxidaxi’ in Chinese characters is the name of the district, “Big River,” followed by “great happiness”. The project also marketed Daxi as a destination through design thinking. By transforming event content with ideas from young professionals in the fields of fashion, contemporary art and events design, the local festival could become an international tourist attraction. The festival may also become a major platform for young artists to showcase their takes on new waves of contemporary art through the roots of Taiwanese temple culture.

Dr. Kuan-Wen Lin is the Secretary-General for the Taiwan Association of Cultural Policy Studies and for the Taiwan Convention and Exhibition Association. He is also a staff member of the Graduate School of Art Management & Culture Policy at National Taiwan University of Arts. He co-authored the books of “International Best Practice in Event Management (forthcoming)” and “Meetings and Exhibitions (2017)”.

This article is part of the special issue on Taiwan’s cultural policy, as featured in Taiwan Insight.

*Vienna Center for Taiwan Studies will be holding a conference on Taiwan’s Cultural Diplomacy – A Decade of Intercultural Discovery on 25-27th October 2019 at University of Vienna, Campus, Austria. If you wish to participate in this conference, please register here.