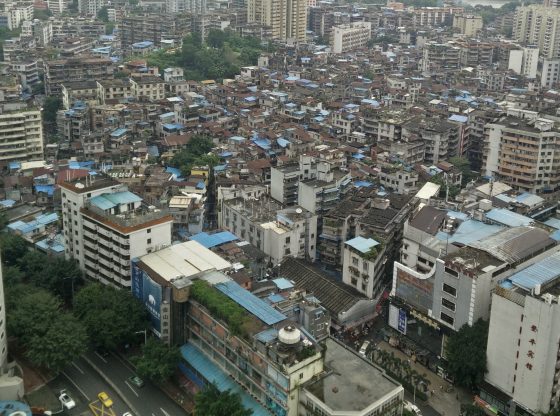 Image Credit: Photo by the author.

In November 2014, the local government in Guangzhou launched a sweeping clean-up in Dengfeng Village, home to one of the largest African communities in China. As a result, most African residents and informal businesses were evicted. While the official reason for the clean-up was to crack down on illegal foreigners hiding in the area, the operation smacked of a beautification project. In a news article published in 2016, the authors celebrated the neighbourhood’s transformation into a tourist spot that attracted more and more Westerners.

The racism revealed here is closely tied to an urban agenda that aims at improving the area’s image and catering to visitors of a higher socio-economic class. However, instead of simply dismissing the clean-up as racist, I propose that we tease out the historical and political aspects that constitute the state’s rationale for the operation.

By the mid-1990s, the residents of Dengfeng found themselves occupying a prime location between the city’s central business district and the trading hub, making Dengfeng Village extremely attractive to various groups within the city.

Located close to Xiaobei, an area nicknamed ‘chocolate city’ because of its high concentration of Africans, Dengfeng Village was originally an organic part of the Northern Suburb of Guangzhou, a mostly agrarian area immediately north of the ancient city wall. Although up until the 1990s there was little indication that the area would become an African enclave, the seed had been sown long before.

In the 1950s, in order to generate desperately needed funding for its fledgling industries, China’s central government placed its hopes on Guangzhou because it had strong cultural ties with overseas Chinese in Hong Kong, Macau and Southeast Asia, who constituted some of the few sympathisers with globally isolated China.

To promote exports, the local government inaugurated the Chinese Export Commodities Fair (Canton Fair) in 1957 at an Expo Centre to the west of Dengfeng. But their wooing efforts did not stop there. Around the same time, the Overseas Chinese Village (OCV) – a suburban-style housing community 1km east of Dengfeng – was constructed to accommodate returning Chinese. Residents were either local dignitaries, key public figures, or established entrepreneurs.

In the 1970s, construction on a major railway station just north of the Canton Fair was finished, as was a major city artery connecting the railway station to the OCV. In the 1990s, as the economic reforms drew more visitors to the trade fair, wholesale malls mushroomed around the railway station, further stoking foreign trade.

In the meantime, the area around the OCV had evolved into the city’s central business district (CBD) with modern skyscrapers housing five-star hotels, Western commercial establishments, multinational corporations and consulates general. This process coincided with an emerging middle class that constitutes China’s main consuming power today.

By the mid-1990s, therefore, the residents of Dengfeng found themselves occupying a prime location between the city’s CBD and the trading hub, making Dengfeng Village extremely attractive to various groups within the city.

Deriving its name from an ancient road, Dengfeng Village was founded as a production team (agricultural unit) during the People’s Communisation Movement in the 1950s. Indeed, between 1960 and 1980, the area saw little development, and agriculture remained its most definitive characteristic. The economic reforms launched in 1978, however, set off a process of land grab by the local state. By 1990, most of Dengfeng’s farmland had been expropriated, but the remaining residential area was protected by the 1982 constitution and exempt from state planning.

Capitalising on the influx of rural migrants flocking to Guangzhou due to the economic reforms and free from state intervention, Dengfeng villagers rebuilt and expanded their houses, turning them into rental properties. These were not modern apartments, but instead resembled the tenements in nineteenth-century New York. Nonetheless, despite their poor conditions, they were very attractive to rural migrants due to their low costs. This was also the reason why Africans gravitated toward the neighbourhood in the 2000s.

The villagers also constructed several hotels which were intended to target visitors to the Canton Fair but which ended up serving mostly Africans instead. However, there was also another important reason why Africans came to Dengfeng in the late 1990s.

In 1988, an amendment to the Chinese constitution sanctioned the sale of land leases, legalising a real-estate market that had been developing underground and triggering widespread land speculation. Property values began to skyrocket and revenues from land lease sales became the municipal governments’ most important source of revenue. This led to a frenzy of land development which resulted in many unoccupied buildings. Because it was adjacent to the city’s CBD, Xiaobei was particularly hard hit by overdevelopment.

In the late 1990s, when the number of Africans visiting the Canton Fair and the wholesale malls nearby grew rapidly, the local government designated Xiaobei as the Sino-African trade zone, directing Africans to the area. Gradually, vacant offices were filled and shops rented out. For many African traders, Xiaobei became their first stop and Dengfeng their home in China.

Motivation to clean up

As demand for the land in Xiaobei and Dengfeng increased, various plans to develop it emerged. One attempted to turn it into a luxury gated community, and another a high-end commercial district targeting professionals from the CBD. However, due to the constitutional protection that Dengfeng Villagers enjoy, not only did neither of these plans materialise, but the persistence of this low-income community – made up mostly of Africans and rural migrants – was thought to be damaging the city’s image. As a compromise move, the state had long been beautifying the neighbourhood.

In 2009, in preparation for hosting the 2010 Asian Games, the government put new tiles on some of the more prominent buildings in Dengfeng, and in 2013, as part of a water treatment project, the district government re-paved the main street in the Village, renovated its storefronts and added greenery. Seen in this context, the 2014 clean-up was simply a culmination of such efforts, which the state justified by invoking the negative connotations associated with Africans such as chaos, criminality and poverty.

As we can see, the formation of the Dengfeng African community and the subsequent clean-up to evict them are intertwined with local history and urban politics. As with all cases of racism, only by sorting out the different subplots to the story can we understand the intimate relationship between race, state and class.

Dr Guangzhi Huang is an Assistant Professor for Interdisciplinary Studies at the MCLA Massachusetts College of Liberal Arts, USA, interested in how global urban development projects affect the urban poor. His most recent paper is ‘Policing Blacks in Guangzhou: How Public Security Constructs Africans as Sanfei’.

Homonationalism, pinkwashing and the question of (queer) Kashmir
Sino-African education cooperation: From the Forum on China-Africa Cooperation to the Belt and Road Initiative