‘Catch Hong Kong as we fall’ 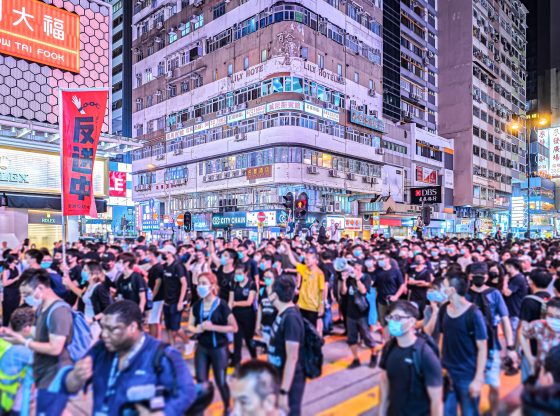 Hong Kong is experiencing its most severe political crisis since the transfer of sovereignty from the UK to China in 1997. For the first time since the end of the Umbrella Movement in 2014, regular mass mobilisation returned to Hong Kong over the summer 2019 in response to the proposed amendments to the Fugitive Offenders Ordinance, contained in what is known colloquially as the extradition bill. Hongkongers perceive the amendments to the legislation as threatening the city’s ‘One Country, Two Systems’ framework.

The fact that the extradition law, once amended, would enable the Chinese authorities to request the transfer of suspects from Hong Kong to mainland China has generated profound fear among Hong Kong citizens, with the perception being that the bill betrays ulterior motives being driven from Beijing.

Cases of political dissidents being arrested and prosecuted under the pretext of other economic and criminal crimes explain Hongkongers’ mistrust of China’s judiciary. The 2015 arrest of bookseller Lam Wing Kee and his business partners for publishing books deemed politically sensitive in China has remained imprinted in Hongkongers’ minds. The recent detention of British consulate worker Simon Cheng has further exacerbated these fears. Hongkongers are concerned that the law would undermine the city’s rule of law as well as political freedom more generally.

In a situation in which police can abuse protesters with impunity and gangsters can walk free after injuring citizens, it is worth asking what more needs to happen before collusion will be investigated or perpetrators held to account

The protests against the bill have brought a diverse range of people onto the streets, including civil servants, barristers and solicitors, teachers, students, parents and the elderly. Protesters have adopted a mantra of five demands in response to the bill and the handling of the subsequent protests. They call for the withdrawal of the bill itself, retraction of the characterisation of protests as riots, dropping of charges against protesters, the formation of an independent commission of inquiry (CoI) into the political crisis, and the implementation of universal suffrage – a long-term aim of all Hong Kong protest movements.

The protesters feel that they have exhausted almost every peaceful means to make their voices heard. Demonstrations, petitions, newspaper advertisements, interfaith prayer meetings, a human chain, the creation of ‘Lennon Walls’ and other creative means of protest have so far failed to shift the government’s position. The movement has radicalised.

It is true that some protesters have engaged in violent tactics during the protests. Nonetheless, the disproportionate use of force by the police in response has also stoked the fire. When the police fired tear gas at protesters on 12 June 2019 to make way for the passing of the extradition bill, citizens ran for their lives. By the time of writing in early September, close to 2,500 canisters of tear gas along with a few hundred rubber bullets, sponge grenades and bean bag rounds have been fired at protesters. Fourteen of Hong Kong’s eighteen districts have seen the use of tear gas, with reports of civilians being affected indiscriminately.

As a result, police brutality has increasingly come to be the central issue of the crisis. Protesters have been severely injured, including three separate incidents of participants being shot in the eye. These events coincide with an online post by an anonymous police officer saying that they would aim at protesters’ heads.

In a statement put out by the Junior Police Officers Association, protesters were referred to not only as rioters, they were also dehumanised as cockroaches. This derogatory language was allegedly repeatedly used by police officers during their operations, while female protesters have also reported cases of sexual harassment during interrogation. These reports of police violence paint a picture of a force that seeks to take the law into their own hands rather than maintain public order. Consequently, police impartiality in the field must be called into question.

While the excessive use of force against citizens might have violated police guidelines, it is almost impossible to hold the police officers concerned accountable. The existing channels for complaints – namely, the Complaints Against Police Office (CAPO) and the Independent Police Complaints Council (IPCC) – are neither independent nor effective. While the CAPO is an internal complaints channel, the IPCC is dominated by pro-government members. It is reported that from 2011 to 2018, only two complaints out of 2,119 were upheld. This is a fundamental reason behind the demand for an independent CoI to bring abusive police officers to justice.

Furthermore, accusations of collusion between criminal triad gangs and the police, stemming from attacks by gangsters on citizens without any repercussions, have further exacerbated the crisis. On several occasions, gangsters have been mobilised to attack citizens with sticks, canes and knives.

In the now infamous Yuen Long train station attack, several passengers – including some returning from a demonstration – were ruthlessly assaulted by some 800 gangsters. The delayed response of the police, who arrived 40 minutes after the mob had left the scene, fuelled suspicions of collusion. Media footage showed that the riot police simply tapped on the shoulders of gangsters holding iron bars in their hands. Even when citizens called the police for help, they did not arrest any of the perpetrators at the crime scene. It was not until a month later that five people were prosecuted for the assault.

In a situation in which police can abuse protesters with impunity and gangsters can walk free after injuring citizens, it is worth asking what more needs to happen before collusion will be investigated or perpetrators held to account.

Furthermore, the shadow of a potential Beijing intervention has only served to intensify Hongkongers’ anxiety. Zhang Xiaoming, the Head of China’s Hong Kong and Macao Affairs Office, has warned that Beijing could deploy the People’s Liberation Army (PLA) to restore law and order in Hong Kong. The military parade in mid-August 2019 in Shenzhen, on the border with Hong Kong, confirmed Beijing’s resolve to crack down on protests and further escalate the crisis.

Against this backdrop, the international community should stand together with Hong Kong. It is not unreasonable to suggest that the police brutality could escalate to the level of a crime against humanity. The Hong Kong government relies on the police to control the protests and therefore is unwilling to investigate the alleged brutality. However, following the public outcry after the Yuen Long train station attack, Hong Kong’s Chief Secretary for Administration, Matthew Cheung, apologised to the victims of the incident.

In response, the Junior Police Officers Association condemned Matthew Cheung and demanded his resignation, thus highlighting the polarisation of opinion between the public and the police. The spectre of PLA intervention further heightens the threat to Hong Kong. Given that the Hong Kong government is either unwilling or unable to protect Hongkongers from violence by the police and gangsters, as well as the threat from the PLA, the international community should consider the doctrine of the responsibility to protect (R2P) and ensure that the Hong Kong government safeguards human rights.

In the words of Martin Luther King, ‘injustice anywhere is a threat to justice everywhere’. Freedom of expression is being eroded in all corners as Beijing exerts pressure on multinational corporations based in Hong Kong which have shown tolerance for the movement against the extradition bill.

Following a warning from the Civil Aviation Administration of China (CAAC) in relation to ‘major aviation safety risks’ at Cathay Pacific Airways, the Chief Executive Officer Rupert Hogg left his post, while four pilots, one flight attendant and two ground staff, who had shown different levels of support for the movement, were either dismissed or forced to resign. The Mass Transit Railway (MTR) operator also suspended train services in some of Hong Kong’s stations during the lawful protests, under pressure from the Chinese state newspaper the People’s Daily and the Xinhua news agency.

HSBC, Standard Chartered and other international banking firms have shifted away from their neutral stance under similar coercion. These companies operate around the world, and if they are muzzled in Hong Kong, they can be muzzled anywhere. Further afield, overseas Chinese communities have mobilised to condemn Hongkongers’ peaceful assemblies, even though this represents an attack on freedom of expression, which inevitably damages the core values of their host countries.

On 4 September, Hong Kong’s Chief Executive, Carrie Lam, finally agreed to withdraw the extradition bill as the protests entered their fourteenth week. But the concession comes too late and is inadequate. The anti-extradition bill protests have transformed into what is now a movement for democracy and justice and – more importantly – for Hong Kong’s future.

There is no sign of the conflict coming to an end, and Hongkongers need the support of the international community more than ever before. They are sending appeals out to the world. To borrow a phrase from a newspaper advertisement placed by Hong Kong netizens: please ‘catch Hong Kong as we fall’.

Debby Sze Wan Chan is a Postdoctoral Fellow in the Department of Sociology at the University of Hong Kong. Her research interests include social movements, bilateral economic cooperation, and public diplomacy. Her latest publication, entitled ‘China’s diplomatic strategies in response to economic disputes in Myanmar’ can be found here.