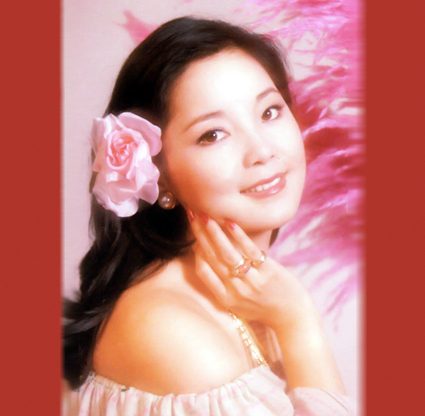 Teresa Teng, in Mandarin Deng Lijun 鄧麗君, was a Taiwanese singer and one of the ‘Five Great Asian Divas’ of the 1970s and 1980s, alongside Judy Ongg, Agnes Chan, Ou-Yang FeiFei and Yu Yar. She was born on 29 January 1953 and unfortunately died at only 42 on 8 May 1995, suffering an asthma attack while on vacation in Thailand. She remains one of the most successful singers of the Mandarin-speaking world. She was born to a waishengren (外省人) family, one of the many that settled in Taiwan following their defeat in the Chinese Civil War. Teng’s singing won her talent competition awards at a young age and she left school early to become a pop-star.

She had a voice for both classic folk songs and contemporary ballads, sounding sweet yet powerful. Her style also reflected a transnational ethos. She covered traditional folk songs accompanied by Western-style orchestration. Many of Teng’s songs were Mandarin renditions of Japanese hits, the orchestration of which had characteristics of Japanese popular music. She also recorded songs in Taiwanese Hokkien, Cantonese, Japanese, Indonesian and English; a multilingual approach that greatly contributed to her expansive audience. Teng was known across Southeast Asia and her fame spread to China in the 1970s and 1980s despite censorship. As the child of a military family, she often performed for the troops and became known as the “soldier’s sweetheart”. The immensity of her popularity gave birth to the expression, “By day, Deng Xiao-ping rules, but by night, Teresa Teng rules.” That is, people listened to Deng because they had to, but people listened to Teng because they wanted to.

Teng’s death in 1995 did little to diminish her fame

One of Teng’s most popular songs was The Moon Represents My Heart (月亮代表我的心), first recorded in 1973 by Taiwanese singer Chen Feng-lan 陳芬蘭. When Teng re-interpreted the song in 1977 and released it as part of an album, the song was a hit and has since been covered by numerous Chinese and international singers. I Only Care About You (我只在乎你) was also a hit, released first in Japanese in 1986 and then in Mandarin the following year. The enduring popularity and significance of this song is exemplified by how often it has been covered by next-generation artists, as show by Taiwanese rapper MC HotDog’s 2015 sampling for his hit song Women 27.

However, Teng’s popularity was somewhat hindered by censorship. Her song “When Will You Return?“何日君再來 was banned because the authorities considered the term ri jun (日君), literally meaning “day, you”, a homophonic reference to the Japanese army rijun (日軍). Her music was also banned in mainland China and denounced as “decadent”, “bourgeois” and “pornographic.” During the Tiananmen uprising of 1989, Teng dedicated a series of concerts to the student protesters in support of their democracy movement. She never performed in mainland China, but for some people there, she represented an icon of modernity and an imagined foreign lifestyle, and her records could still be found on black markets.

Teng’s death in 1995 did little to diminish her fame. To satisfy her fans, her family founded the Teresa Teng Memorial Park, where people still to this day leave flowers and pay tribute. Her songs have been covered by numerous singers and are featured in various films. A musical about her life debuted in Hong Kong and has been performed in Singapore and the UK. In 2013, Teng was briefly “revived” in a Jay Chou concert where she appeared as a 3D virtual hologram and sang three songs with Chou. In 2013, Madame Tussauds Hong Kong honoured Teng with an all-new restyled wax figure. Five years later, Google Doodle commemorated Teng´s 65th birthday. Her life story is the theme of several television shows, the most recent of which, Only you: Teresa Teng (鄧麗君之我只在乎你), aired in May 2019 and has receieved celebrity endorsements as a commemoration of her greatness.

The first time I listened to Teresa Teng’s song, the already-mentioned I Only Care About You, was during an undergraduate Chinese language class. At first hearing I thought it romantic, but did not like the slow tempo and melody. I did not want to sing it. Since then, I have grown to appreciate it and even find it beautiful. Now I find myself listening to the song at least a couple of times a year – even while writing this article! Teng’s music is calming, rich, and flowing. In the end, I believe her legacy will live on in the future as one of the most influential singers of Mandonpop history.

Zuzana Shejbalová is MA student at the Faculty of Arts, Masaryk University. This article is part of the special issue lecture series ‘Music: Pop and Censorship: Taiwan’s Popular Music (Spring 2019).

‘Catch Hong Kong as we fall’
News from Kashmir: The broader view