Han Kuo-yu and the enigma of Taiwan’s indigenous politics 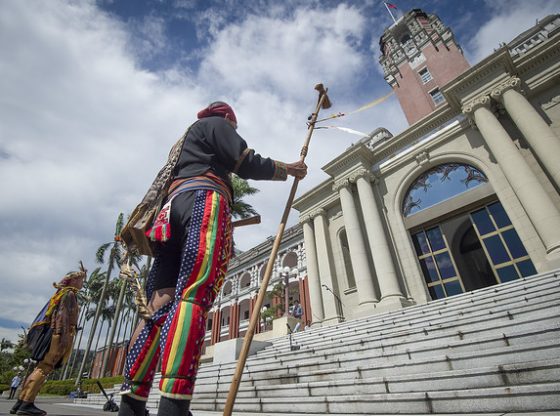 Image credit: 總統代表政府向原住民族道歉 by the Office of the President, Republic of China/Flickr, license CC BY 2.0

Taiwan is having a raucous lead-up to the January 2020 Presidential and Legislative elections, not least because of the emergence of populist Han Kuo-yu as candidate of the Chinese Nationalist Party (KMT). Han is often portrayed as Taiwan’s version of Donald Trump or France’s Marine Le Pen. In previously unseen nationalist fervour, Han’s followers wrap themselves in red, white, and blue Republic of China (ROC) symbols and sing patriotic songs at rallies heavily covered by media. Han promises to protect the ROC; while securing unprecedented wealth through rapprochement with Beijing. He also attracts people who resent the incumbent Democratic Progressive Party (DPP) government for having legalised same-sex marriage and trimmed pensions for public servants.

As part of a long-standing pattern that seems paradoxical to outsiders, Han is loved in Indigenous communities in spite of the fact that the other party speaks most clearly to their interests as Indigenous peoples. A DPP government implemented Taiwan’s Basic Law on Indigenous Peoples in 2005. President Tsai Ing-wen began her term in 2016 with a public apology to Indigenous peoples for 400 years of colonisation, immediately establishing the Presidential Office Indigenous Historical Justice and Transitional Justice Committee. Yet, Indigenous citizens tend to turn a cold shoulder to such initiatives.

People in these places expressed resentment toward Tsai over pension reform and marriage equality, as social conservatism is strong in these deeply Christian communities

In the 2018 municipal elections, when Han emerged from the side-lines to become Kaohsiung’s first KMT mayor since 1998, his support was strongest in Indigenous mountain districts. Although he won a relatively modest 53.87% of votes overall, he won 85% of eligible votes in Namasia District, 89% in Taoyuan, and 92% in Maolin. How can we explain the Indigenous zeal for Han?

In May and June 2019, as Han was campaigning for the KMT primary, I visited Indigenous communities in Nantou, Hualien, Taitung, and Orchid Island, talking to people about the elections and their visions for the future of Taiwan.  I found interesting contrasts between different kinds of Indigenous communities.

The Highlands as ROC Stronghold

I first visited Nantou’s Ren’ai Township (81% Indigenous), and Hualien’s Hsiulin (88%). I noticed that most televisions sets in restaurants and grocery stores were tuned to CTiTV, which Taiwan observer J. Michael Cole describes as Han’s biggest media supporter. CTiTV, owned by the Want Want China Times conglomerate, has an obvious pro-unification bias and presents a positive image of China. The people I met seemed to give me talking points straight from Han’s campaign headquarters:

A retired township official: “The only way to wealth is to cultivate a close relationship with the Mainland….I was recently in Lishui (Zhejiang), which was very poor in the 1980s. Now, it is very wealthy. We have to catch up.”

A farmer: “Han left the KMT 17 years ago. A lot of ordinary people were disaffected with the party and also left. But, now that Han has come back, we have returned, too….We don’t want to be Communist. We want a return to the golden days of the ROC, the era of Chiang Kai-shek and Chiang Ching-kuo.”

The overall message was that Han can create a close economic relationship with China, bringing unprecedented wealth to everyone. People in these places expressed resentment toward Tsai over pension reform and marriage equality, as social conservatism is strong in these deeply Christian communities. Poor people also like Han’s promises of local employment and infrastructure development.

A short visit to coastal Taitung’s A’tolan provided a sharp contrast. Whereas the above districts all number among Taiwan’s thirty “Mountain Townships,” A’tolan is in the plains Donghe Township. In mountain townships, land is Indigenous reserve land, households have only usufruct rights, and only Indigenous people can purchase those rights. In other townships, households possess freehold title. As a result, Donghe Township is only 53% Indigenous, even though A’tolan is mostly Amis. There is a further difference in the Legislative electoral system. The mountain townships vote on an electoral roll known as “mountain Indigenous,” and the remaining for “plains Indigenous.” They thus choose from a different set of Indigenous candidates for the Legislative Yuan and are imbricated in different factions of the KMT.

When I walked around A’tolan, I immediately noticed that the restaurants were not tuned to CTiTV, or even to the more moderate TVBS, another 24-hour news broadcaster. Even at home, people seemed more interested in television dramas. I also met people who expressed concern that Tsai might lose. They supported her approach to transitional justice and other progressive policies. Yet, people told me the KMT is also strong in A’tolan. People are just more discrete because there are differences of opinion around them.

Orchid Island (Lanyu): Not Quite Taiwan

Orchid Island is legally a Mountain Township, but feels much different, and not just because it is surrounded by sea rather than by mountain peaks. The locals, when talking about their work and travel experiences, point to Taiwan on the horizon. Taiwan feels distant. Although I heard the same talking points about Han as in Nantou and Hualien, TV sets were not turned to CTiTV. When I asked why, people responded with dry humour that reveals a certain disenchantment with Taiwan:

An NGO operator: “Lanyu people don’t really care about Taiwanese politics. We only like politicians who show an interest in Lanyu. So far, James Soong is the only one who has done so.”

An elderly man: “We have more in common with Batanes (in the Philippines). I think that we should join forces with Batanes and declare Independence.”

Curious to see how these very limited ethnographic impressions map onto larger statistical tendencies, I looked up 2016 election results from these townships. Just as I expected, although Tsai won the election in Taiwan, the KMT won in all but one of these townships. The DPP’s best showing was in Donghe, where Amis live side-by-side with Han Taiwanese. To my surprise, Orchid Islanders really did vote for James Soong!

This reveals an ongoing dynamic.  In a dialogical approach, people develop political ideas within face-to-face relationships on a daily basis. In Nantou and Hualien, Mainlander-dominated KMT networks have successfully cultivated relations with people over drinks, meals, and favours. They convince voters that the KMT is a pragmatic, non-ideological party favouring economic development and peace with China; whereas the DPP is an ideological party based on Hoklo ethnic chauvinism, fails the economy, and risks war with China. They cultivate in Indigenous people a pride in ROC citizenship.

Discussions about Han across Taiwan reinforce this dialogical perspective, and allow for more nuanced hypotheses. Not only is indigenous identity important, but so is the type of indigenous community. In the ethnically homogenous Mountain townships, where people depend on township offices to access land, KMT township networks have greater influence. In the Plains townships, the networks are still strong, but people also have day-to-day relations with non-indigenous people and develop more diffuse political commitments. Orchid Island remains a distinct society.

The take-away from this is less about Taiwan’s 2020 election than about the very nature of political behaviour in electoral democracies. After all, Taiwan’s Indigenous people represent a very small minority and will not sway the election in any way. Han’s strong Indigenous following shows that Indigenous people do not necessarily identify first as Indigenous peoples endowed with natural sovereignty or other abstract ideals promised by the United Nations Declaration of the Rights of Indigenous Peoples. A neo-liberal, socially conservative candidate can appeal to other aspects of their identities, such as being Christians. Most of all, Han’s success shows that face-to-face relationship building works better than ideology and promises even in a modern democracy. If the DPP wants to make in-roads there, they will have to work harder in the grassroots for years to come.

Professor Scott E. Simon is Professor in the School of Sociological and Anthropological Studies at the University of Ottawa. A researcher at the Centre for International Policy Studies and the Human Rights Research and Education Centre, he is a frequent commentator on Taiwan.

This article was first published on Taiwan Insight