Patronage, performance and projection in the Indian elections: What accounts for the denationalisation of party competition in the 1990s? Part I

Home /Asia/South Asia/India/Elections/Patronage, performance and projection in the Indian elections: What accounts for the denationalisation of party competition in the 1990s? Part I 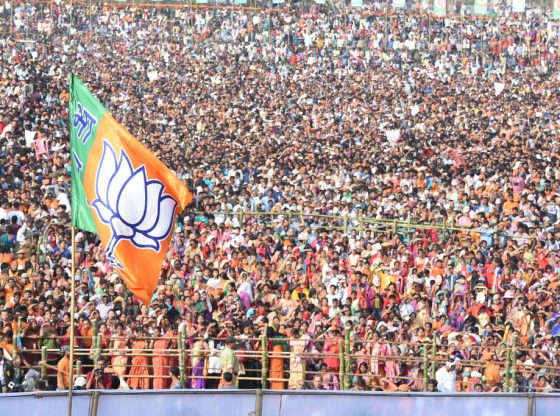 The magnitude of the win by the Bharatiya Janata Party (BJP) in the 2019 elections in India took many by surprise. The BJP not only amassed a majority of parliamentary seats, it even crossed the 300 seat benchmark, a feat not repeated since the electoral victory of the Congress Party in 1984 (on the back of the assassination of its then imperious Prime Minister, Indira Gandhi).

True, in 2019 the BJP had the deepest electoral coffers, enabling it to outspend all other parties in the campaign. And with Prime Minister Narendra Modi as its leader, the party also possessed a highly contentious but equally combative ‘star campaigner’. Indeed, following a set of election victories in state assembly elections since the last general election in 2014, the BJP had built up a position of dominance – some would even say hegemony – in the Indian party system.

Nonetheless, the BJP had performed poorly in a set of assembly elections in three Hindi-belt states (Madhya Pradesh, Rajasthan and Chhattisgarh) in November-December 2018. This was significant, because traditionally the BJP stood strongest in the Hindi-belt where it also faced a weakened Congress Party.

Parties which did well at the state level failed to aggregate their votes successfully at the national level, creating a much more fragmented party system overall

Most crucially, economic growth had been sluggish at best, and the effect of policies such as the Goods and Services Tax (GST) reform in June 2017 and demonetisation in November 2016 had slowed it even further. Indeed  ‘Poor economic performance should have hurt the Prime Minister at the polls’, wrote Sumit Ganguly, Himanshu Jha and Rahul Mukherji in a Foreign Policy blog. ‘By many measures, Narendra Modi shouldn’t have won another term as Prime Minister’.

Indian social scientists have always been ambivalent about the role of economics in explaining the outcome of Indian elections and the shape of the Indian party system, preferring to emphasise the role of caste, religion or language as determining factors instead.

In the context of increasing democratisation, so they argue, no one party could occupy a dominant space in national and state politics. Therefore, over time, as the country developed, as its population became more literate, and as education became more widespread, the Congress Party – which had primarily offered only tokenistic representation to the various segments of Indian society – was forced to cede ground to a set of caste-based, regional, language-based or communal parties.

Other pundits pointed to the role of India’s electoral and federal systems in shaping the party system. The decentralisation of fiscal power in the 1990s also decentralised Indian party competition, they argued. In this more decentralised setting, the first-past-the-post electoral system could still produce fairly concentrated patterns of party competition at the level of the states, but parties which did well at the state level failed to aggregate their votes successfully at the national level, creating a much more fragmented party system overall.

In other words, voters would vote ‘regionally’ even in a general election. If that is the case, though, then how did the BJP manage to build up a position of dominance post-2014? Equally, why did the Congress Party manage to maintain a position of dominance for so long in the Indian party system, even though federalism has been a core feature of Indian politics since the first general elections in 1952, and neither caste, linguistic nor communal divisions were absent either?

In a recent article we try to answer both of these questions. We argue that the long-term evolution of the Indian party system must be understood in relation to the pattern of economic governance and the incentive structures which this generates for politicians and voters alike.

These incentive structures vary depending on the dominant paradigm of economic governance: a state-led or planned economy (as existed in India roughly from 1952 until 1989), or a predominantly market-led or liberalised economy (roughly from 1991 onwards). Prior to the economic reforms of 1991, it was the bold liberalisation attempt of 1985 that undermined the foundations of the statist paradigm. As a direct consequence, the ruling national party quickly lost its ability to use patronage politics and its power to buy votes, which in turn resulted in a sharp rise in political mobilisation based on social cleavages.

We find that under a command economy paradigm, the national ruling party (mostly Congress from 1952 until 1989) used its privileged access to state resources to reward politically affiliated states and ‘punish’ states with governments controlled by national opposition parties. Other things being equal, this ‘patronage’ strategy paid off electorally: the larger the per capita receipts of national funding at the state level, the stronger the electoral performance of the Congress Party in national and state elections. We also find that in the era of centralised planning, the central government was fully capable of claiming credit and reaping electoral rewards from its allocation strategies when economic growth and human development improved.

In contrast, this positive association between discretionary grants and electoral performance does not hold during the market-economy era. In a context of liberalisation, both the central and state governments must satisfy the demands of (international) credit markets; therefore the centre cannot simply use the same resources to placate politically aligned states. Furthermore, in a marketised economy the centre typically leaves more space for the states to attract inward investment, even if they are controlled by Chief Ministers representing national opposition parties.

We also find that during liberalisation there is no significant link between economic growth, an improvement in human development, and the electoral performance of the national incumbent party. Instead, significant improvements in state-level economic indicators and human development benefit the Chief Minister’s party and the party controlling the highest number of federal parliamentary seats for that state – i.e. with the highest number of Members of Parliament (MPs).

In most cases, the MPs’ party is the same as the Chief Minster’s party rather than the national incumbent party (the Prime Minister’s party). Hence, given that in the liberalisation era the Chief Ministers often represent different parties across states, this means that the Indian party system as a whole became increasingly de-nationalised or fragmented.

Chanchal Kumar Sharma is an Associate Professor and Head of the Department of Political Science of the Central University of Haryana, India.

Wilfried Swenden is a Senior Lecturer in Politics at the University of Edinburgh, UK.

*This is the first of two posts based on the main findings of the authors’ recent research article: ‘Economic governance: Does it make or break a dominant party equilibrium? The case of India’.

Chinese HE students in the UK: social media, connections and sense of belonging
Patronage, performance and projection in the Indian elections: The puzzle of the BJP’s rise – is it sustainable? Part II