Patronage, performance and projection in the Indian elections: The puzzle of the BJP’s rise – is it sustainable? Part II

Home /Asia/South Asia/India/Elections/Patronage, performance and projection in the Indian elections: The puzzle of the BJP’s rise – is it sustainable? Part II 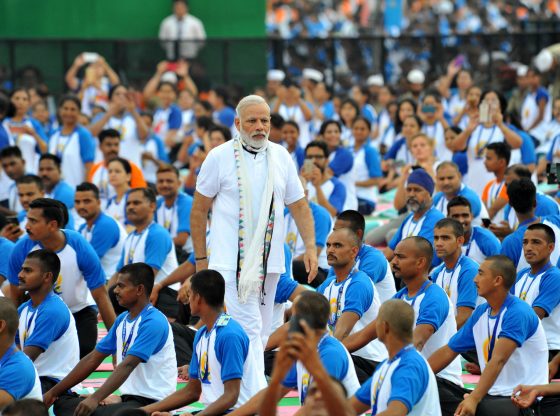 This is Part II of a two-part special. You can read Part I here.

In the first part of this article we argued that it was the 1985 liberalisation of India’s economic system which first unleashed the forces of political and economic decentralisation, and the economic reforms of 1991 which finally rendered the monopolisation of political power a difficult task. In which case, one might ask: how does the analysis leave room for the emergence of the BJP as a dominant party, notwithstanding the continued prevalence of liberalisation?

We argue in a recent article that the rise of a new national dominant party is not necessarily inconsistent with a liberalisation paradigm. If a single party consistently delivers in the states in which it governs, then it could induce voters in other states to vote for it in those states and eventually support it in national elections. This is what happened for the Bharatiya Janata Party (BJP) in the 2014 elections in India.

We observe that since the second half of the 2000s, other states governed by the BJP and the National Democratic Alliance (NDA) which it leads have consistently performed well in terms of economic growth and/or development. Voters supported BJP state incumbents who delivered on their promises of economic development, notwithstanding the variable levels of development between these states (such as relatively wealthy Gujarat vis-à-vis relatively poor Madhya Pradesh).

However, it was the 2012 Gujarat assembly elections which provided a turning point. Helped by a national media which had grown wary of a twice incumbent Congress-led national government plagued by corruption scandals and an economic slowdown, Gujarat Chief Minister Narendra Modi campaigned primarily on a platform of economic competence and touted his pro-business ‘Gujarat model’ as the model to emulate nationally. His fourth consecutive win gave him the required visibility to project himself as a prime ministerial candidate. That he came from the ranks of the states demonstrates how in the liberalisation era, state office could make national leaders.

This leaves us of course with the conundrum of the 2019 election result, which the BJP won despite the relatively poor economic performance in India as a whole and across most of the states ruled by the BJP.

Some would argue that 2019 may just be an aberration; that voters were willing to give Modi ‘another chance’ and that they continued to trust him to make good on his economic promises more than any other alternative candidate or party. Others point to the ability of the BJP to shift the dominant discourse towards nationalism – an issue the party could own more easily – especially when helped by the terrorist attack in Kashmir less than two months before polling started.

Finally, Modi and the BJP have been able to emulate a pro-business strategy in the style of Indira Gandhi, geared towards conferring favours on the party’s business patrons. Indeed, in recent years the Modi-led BJP has been able to cultivate links with business far more successfully than Congress. The BJP also introduced the Electoral Bond Scheme so that more money could be given to fund parties and campaigning (and the BJP much more so than any other party).

Whatever happened in 2019, our research (which is based on the period between 1952 and 2014) offers a piece of advice for both the ruling and opposition parties: despite current efforts to consolidate the Hindu vote and deflect attention from a weakening economy by emphasising nationalism, ignoring economic development in the states ruled by the Prime Minister’s party – especially if non-affiliated states deliver a better economic performance – could harm the electoral fortunes of the BJP in the future. Conversely, poor economic performance by non-affiliated state governments may ensure wins for the BJP in future elections, irrespective of its failures at the national level.

Thus, the national opposition parties need to focus their energy on demonstrating exemplary performance in the states which they rule in order to win the approval of their voters in both state and national elections alike.

Of course, our logic only works so long as economic data are neither suppressed nor manipulated, the government’s policies are open to full scrutiny in the media and by civil society more widely, electoral competition remains free and fair, the Indian election cycle is not restructured to facilitate ‘simultaneous polls’ to the Lok Sabha (national parliament) and state assemblies (i.e. implementing Modis ‘one nation, one election’ proposal). and political opposition is reasonably well-organised and coordinated. In the current context, we cannot take any of this for granted.

Chanchal Kumar Sharma is an Associate Professor and Head of the Department of Political Science of the Central University of Haryana, India.

Wilfried Swenden is a Senior Lecturer in Politics at the University of Edinburgh, UK.

*This is the second of two posts based on the main findings of the authors’ recent research article: ‘Economic governance: Does it make or break a dominant party equilibrium? The case of India’.

Patronage, performance and projection in the Indian elections: What accounts for the denationalisation of party competition in the 1990s? Part I
Rekindling hope: The Afghan peace process