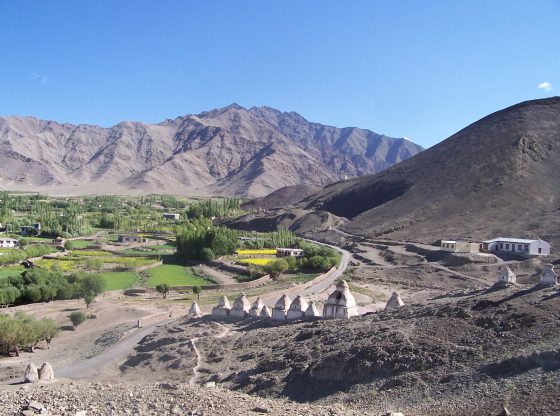 Ladakh used to be an independent kingdom1 long before it was invaded and incorporated into the erstwhile state of Jammu and Kashmir in 1834 under the command of Zorawar Singh, General of the Dogra ruler Gulab Singh. Today the presence of a sizeable Sikh community (and several Gurdwaras) in both Kargil and Leh, (alongside the Zorawar Fort in Leh town), is reminiscent of the former Dogra rule in Ladakh. However at the time of partition in 1947, Ladakh became part of the Indian state of Jammu and Kashmir by default, to be administered from Srinagar.

Hence whether being invaded by the Dogra rulers or hurriedly bundled together with the state of Jammu and Kashmir (J&K) after partition, the voice of the Ladakhis has never been taken into consideration. And yet Ladakh is culturally, geographically and socially very different from Jammu and Kashmir, and has much more cultural affinity with Tibet instead. Consequently, the union of Ladakh with J&K has never been to the satisfaction of the people of Ladakh, and the current Kashmir conflict has increased this dissatisfaction.

The new Union Territory of Ladakh will need a unique approach so that it can manage its regional development while at the same time taking into account the sensitivities of its environment, customs and culture

The demand for Ladakh to be separated from Kashmir and granted Union Territory (UT) status in India is therefore as old as the history of Ladakh post-partition. Sensing the public mood early on, in 1979 the J&K government divided the region into two districts: Leh, which has a Buddhist majority, and Kargil, with a Muslim majority. This step was taken in order to divide the people along religious lines and also to swing the Muslim vote (especially in Kargil) to favour the Kashmiri politicians.

It was the beginning of the religious fault line created by the government in Kashmir which culminated in violent riots between Buddhists and Muslims in 1989 over a minor scuffle between Buddhist and Muslim youths in Leh town. What followed was a call for social and economic reform through a boycott by the Ladakh Buddhist Association (LBA) – initially targeted at Kashmiri Muslims (Ladakhi Muslims were simply collateral damage) – and an intense revival of the demand for UT status.

A curfew was imposed and only lifted in 1992 when the national and state governments agreed to set up the Ladakh Autonomous Hill Development Council. Hill Development Councils were created in Leh and Kargil in 1995 and 2003, respectively, but the feeling of step-motherly treatment by the state government persisted until 5 August 2019, when Article 370 of the Indian Constitution was revoked by the Indian government, following which Ladakh was finally made a Union Territory.

The geographical location of Ladakh makes it strategically very important for India because first, it connects India to Central Asia, South Asia, China, Pakistan and the Middle East, and second, it hosts the mighty Siachen glacier. Historically it was also the centre of trade along the Silk Route and acted as a doorway from India to Tibet and Central Asia.

India has fought two major wars with Pakistan over the territory: along the Nubra front in 1971,2 and the Kargil War in 1999 in the Batalik and Drass sectors. India also engaged in a full-fledged war with China in 1962 along the Ladakh front, when the Chinese People’s Liberation Army (PLA) invaded Ladakh and Arunachal Pradesh (then known as the North-East Frontier Agency) in a synchronised attack.

These wars have reconfirmed the significance of Ladakh as a strategic region that has to be taken into consideration when designing India’s defence policy.  Therefore, bringing the Indian Army into the region contributed to the overall development of the people of Ladakh, whether by connecting villages with roads, opening Army schools and hospitals, or providing jobs for young people through the Indo-Tibetan Border Police (ITBP).

Subsequent governments in Srinagar, the state capital of Jammu and Kashmir, very conveniently kept Ladakh at the end of their priority list, and mainstream politicians only ever visited the region during election campaigns, bringing empty promises of development. The state government empowered a few privileged local leaders in Leh and Kargil, and made sure to play the religious card whenever it needed to increase its vote bank.

The groundwork for UT status for Ladakh was laid in the first week of February 2019, when J&K governor Satya Pal Malik announced the granting of divisional status to Ladakh, thus creating three administrative units of Jammu, Kashmir and Ladakh. At the time people took little note of the change. However, following the revocation of Article 370, the Jammu and Kashmir Reorganisation Bill provides for two separate UTs in the form of Jammu and Kashmir on the one hand, and Ladakh on the other.

This has drawn Ladakh back into mainstream discussions on television and in the drawing rooms of India. The emotionally charged speech by the Ladakh Member of Parliament (MP) Jamyang Tsering Namgyal echoed the sentiments and feelings of most Ladakhis, bringing home the message that Ladakh has finally come out of the shadow of Kashmir.

Aside from  the jingoistic tone and fervour of the speech, I agree with most of the points Jamyang made in Parliament. When the opposition tried to point out the dissatisfaction of the Kargilis, Jamyang was right to respond that sentiments in Kargil town do not represent the feelings of all the people in the region.

In point of fact, until now, politics in Kargil and Leh has mostly been concentrated in the hands of a few local people whose strings are mostly pulled by their controlling heads in Srinagar. Also, compared to Leh, Kargil lags behind in all areas because the few powerful people close to the corridors of power have made sure to keep the far-flung regions of Zanskar, Bod Karbo and Batalik underdeveloped for the sake of their own political and personal gain. Therefore, on both occasions when Ladakh was given divisional or UT status, this faction – along with the religiously motivated political parties of Kargil Islamia School and the Imam Khomeini Memorial Trust (IKMT) – made sure to register their anger over the decisions.

It is important to note, as already mentioned, that the earlier division of Ladakh into two districts along religious lines laid the foundation stone for the differences between these two districts. Their politicians have never been on the same page, whether concerning the election of an MP or the issue of UT status. On the contrary, the politicians in Kargil have demanded the creation of a greater Ladakh which would also include Baltistan, in the northern territory of Pakistan. And while true that the majority of Ladakhis are happy with the move to UT status, it has to be said that being given UT status without a legislature nonetheless raises concerns.

The current situation is one of confusion and curiosity about what the revocation of Article 370 and the move to UT status actually mean for the people of Ladakh.  Will the Hill Development Councils continue to function? And how will be the rights and status of the people of Ladakh be protected under the government’s new scheme?

Ladakh is a tribal region and most of its population (98 per cent) hold Scheduled Tribe (ST) status. Therefore, there is a demand for Ladakh to be designated as a tribal area under the Sixth Schedule of the Indian Constitution and for its language, bhoti,3 to be included under the Eighth Schedule to protect the region’s unique cultural identity, customs and minority status: ‘Based on Articles 244(2) and 275(1), the Sixth Schedule provides for the administration of tribal areas in the states of Assam, Meghalaya, Tripura and Mizoram after setting up the autonomous district and regional councils.

Consequently, a memorandum laying out these demands was submitted to Tribal Affairs Minister Arjun Munda during his recent visit to Leh to attend the National Tribal Festival Aadi Mahotsav, which was organised for the first time in Ladakh. Haji Anayat Ali, a politician from Kargil and the current Chairman of the Jammu and Kashmir Legislative Council, also met the Minister and discussed the issues and concerns of Kargil.

The Indian government has decided to implement the changes granting UT status to Ladakh on 31 October 2019, which is the anniversary the birth of Sardar Vallabhbhai Patel. Before that, however, it will be interesting to see what steps the government takes to fulfil the demands of the people of Ladakh, given that the ruling party in New Delhi – the Bharatiya Janata Party (BJP) – is also the ruling party in the region.

It will also be interesting to see how the whole issue of Kashmir unfolds, given that the main highway which connects Ladakh to the outside world passes through Kashmir. All essential goods and commodities are brought to Ladakh along this highway, and if the situation in the Kashmir Valley does not improve, the Indian government might need to find alternative ways to bring supplies to Ladakh.

In addition, we shall have to see how the government plans to speed up development in the region, which is environmentally very sensitive. Leh town already faces significant problems trying to adjust to the sudden increase of tourists in the summer months, which is harming the environment in a great many ways. Hence the new Union Territory of Ladakh will need a unique approach so that it can manage its regional development while at the same time taking into account the sensitivities of its environment, customs and culture.

1 Following the collapse of the early Tibetan Empire, most of the border regions including Ladakh became independent kingdoms with independent rulers, most of whom came from branches of the Tibetan royal family.

2 During the 1971 war, India captured Turtuk and other nearby villages from Pakistan in the Nubra valley.

3 The Ladakh language, also called bodhi, is a Tibetic language spoken in the Ladakh region of India.

Dr Zainab Akhter is a Research Analyst at the Institute of Defence Studies and Analysis, India. She regularly writes on the issues of soft power, cultural diplomacy, India-Pakistan relations, confidence-building measures, people-to-people diplomacy and Jammu and Kashmir (with a special focus on Ladakh).