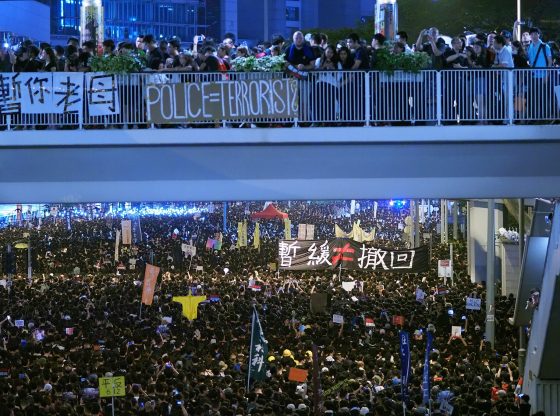 Throughout this summer of protest in Hong Kong it has been difficult to tell who is in charge. The embattled extradition bill appears to have been the brainchild of the government of the Hong Kong Special Administrative Region (SAR). And yet leaked information, unprecedented press conferences by the Hong Kong and Macao Affairs Office in Beijing, and a meeting organised by the Central Government Liaison Office in Shenzhen all suggest that the central government in Beijing has been closely involved in managing the crisis. At the very least, it is highly likely that all major decisions in the SAR have been approved centrally.

How then have the authorities’ reactions affected the dynamics of the events, and what are the wider repercussions? Leaving aside the decision to delay the extradition bill indefinitely on 15 June 2019, and the announcement on 4 September that the bill will be formally withdrawn and the government planned to engage in dialogue, the official strategy in response to the protest had three main components.

While the intended effects have not materialised for the government, unintended ones have multiplied. An initially single-issue protest has transformed into a social movement

Second, since late July 2019 there has been an escalation in Beijing’s anti-protest rhetoric. Senior officials declared that the demonstrations have the ‘characteristics of a colour revolution’ and showed ‘signs of terrorism’. Simultaneously, an initially strict censorship policy on the Mainland gave way to a propaganda campaign. In late August 2019, an intervention appeared imminent when shrill rhetoric was combined with drills by the People’s Armed Police in Shenzhen and propaganda videos showing units of the People’s Liberation Army (PLA) subduing black-clad protesters.

Third, the protests were met with unprecedented force. Starting on 12 June 2019, when police were accused of using excessive force against protesters surrounding the Legislative Council building, the Hong Kong Police Force followed a script of zero tolerance. By mid-September 2019 the police had fired more than 3,000 tear gas grenades and had arrested 1,459 protesters. Officers used batons, rubber bullets, bean bags and water cannons liberally. On 21 July, police failed to protect train passengers from an armed mob, and on 31 August, riot units were filmed storming trains and seemingly indiscriminately battering anyone who had the misfortune to stand in their way.

These high-profile events might be just the tip of the iceberg. A seemingly endless barrage of videos on social media depict police officers using excessive force when making arrests (against male and female demonstrators alike), using foul language, calling protesters ‘cockroaches’, concealing their ID numbers and, in some occasions, apparently planting evidence.

Seemingly to the surprise of decision-makers, the measures have neither deterred protesters nor cut off their popular backing. Surveys show that support for the protesters’ demands remains strong. According to one poll in late August 2019, more than 80 per cent of those questioned either do not feel inconvenienced by the protests in their daily lives or can ‘accept’ or ‘understand’ it. A significant minority now approves of radical tactics.

While the intended effects have not materialised for the government, unintended ones have multiplied. An initially single-issue protest has transformed into a social movement. Radicals have openly challenged the authority of Beijing. Hong Kong’s international reputation and business confidence have been severely dented. The popularity of the Chief Executive of Hong Kong has plunged to 17 per cent, the lowest recorded figure since measurements began. The main, if not the only, reason why the Hong Kong government has not collapsed is that Hong Kong is a Chinese SAR.

The Hong Kong Police Force’s formerly high repute has been seriously damaged and an independent commission to investigate the summer’s events has now become the most important demand of the protesters, drawing overwhelming popular backing. Hence, Carrie Lam’s U-turn in formally withdrawing the bill has so far failed to calm the situation decisively. Moreover, it may be only a slight exaggeration to claim that a whole generation of young people has been newly politicised and will be very determined in their opposition against the status quo. Even if resistance is eventually worn down without further concessions, this bad blood will stick and re-emerge.

On the Chinese mainland, the public are wondering why the protesters are first denounced in the harshest terms and then accommodated by the government. Despite all the hardline posturing, the signal Beijing dreads most of all – mass demonstrations in defiance of the central government – is now out, boosting the confidence of dissidents at home and abroad.

The protests also complicate China’s diplomatic efforts. They provide ammunition for those pushing for a tougher line on China and interfere in the trade war between China and the Trump administration in the US. The nationalistic counter-campaigns are not well received overseas – including in Eastern Europe, where Beijing has invested a great deal of political and economic capital in recent years. On the island of Taiwan, events in Hong Kong have greatly increased President Tsai Ing-wen’s hopes for re-election.

Could China’s decision-makers have known better? Curiously, in contrast to the SAR government’s conduct, local leaders on the Mainland are encouraged to defuse emotions by engaging with protesters. Police guidelines discourage the use of excessive force, precisely to avoid it backfiring.

The Chinese authorities have also learned that information about police atrocities spreading online creates outrage. It does not take a PhD in Sociology to predict that this effect will be even stronger in Hong Kong where there is a free flow of information. And had decision-makers spent an afternoon on the LIHKG site, which is the main forum for communication between protesters, they would have learned that threats of intervention from the Mainland will fail to deter. The mood online was to shrug off this possibility, or even welcome it.

Lessons from previous protests in Hong Kong have also been forgotten. A crisis in 2003, provoked by a national security bill, was pacified when the draft was quickly suspended (and later withdrawn) while the officials responsible resigned. What followed were five years of increasing trust in the central government and strengthening national identification in Hong Kong.

In 2014, the authorities were not prepared to make concessions in response to demands for universal suffrage. Yet, the Occupy Central movement, which only had limited support initially, gathered a mass constituency after the police were perceived to have used excessive violence on 28 September 2014. When the police force subsequently changed tactics and used a much lighter containment approach, support eventually waned and the protests fizzled out.

We can only speculate why the authorities opted for such a dysfunctional approach on this occasion. Some have argued that it has to do with Beijing’s filter bubble and track record of misinterpreting Hong Kong. Others think that elite conflict is to blame. An alternative explanation is a dogmatic interpretation of events.

On the Mainland, the response to protests follows a Maoist script using two basic registers: when resistance is believed to represent ‘contradictions among the people’, a repertoire of engagement, conditional concessions and targeted repression is used. When it is labelled as ‘contradictions between us and the enemy’, however, an iron-fisted repertoire of zero concessions and total repression follows.

Perhaps officials interpreted provocation by some radicals as evidence of the latter condition and so shifted into a hardline response gear. On the Mainland, such an approach is able to quell overt resistance under conditions of information control and a politicised legal system. In Hong Kong, however, it backfires. Using a pragmatic, evidence-based approach, China’s leaders would have realised that under such dissimilar background conditions, different standards and methods need to be applied.

Let us hope that Beijing is able to rediscover its ability for unorthodox policy-making and the tolerance of inconsistency that enabled the birth of the very idea of ‘One Country, Two Systems’. Because if not, things do not bode well either for Hong Kong or, indeed, for China.

Christoph Steinhardt is an Assistant Professor in the Department of East Asian Studies at the University of Vienna. He has published on contentious politics, environmental politics and public opinion in mainland China and national identity in Hong Kong.

Chau Wang-Fung is an independent scholar based in Hong Kong. He graduated from the Chinese University of Hong Kong with a major in Geography.

What can a tourism bureau learn from a student protest movement?
Trouble in the Blue Camp