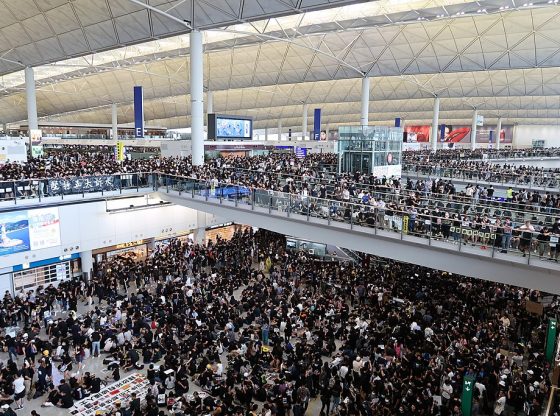 Hong Kong’s major tourist attractions have been quiet recently; this is the result of the protests that started in June 2019 as a pushback against the proposed extradition bill. Increasingly, protesters have resorted to civil disobedience and radical actions. This has included occupying the airport and the transportation links to and from it in order to cause the cancellation of flights, disruption to local public transport operations and a general strike.

The escalating violence has resulted in the international media portraying Hong Kong as a dangerous city, and many countries have issued travel advisories stating that Hong Kong might be a risky place to visit.

Hong Kong’s major tourist market is Mainland China. In 2018, 78 per cent of all visitors to Hong Kong came from the Mainland

Various sectors of the economy have been hit by the protests, including tourism. Tourism is considered one of the economic pillars of Hong Kong’s economy, and visitor numbers grew rapidly during the first half of 2019. However, the latest figures released by the Hong Kong Tourism Board show that growth in July 2019 was down 4.8 per cent in July 2019, compared to July 2018. The figures for January to July were still positive, showing growth of 11.1 per cent thanks to the high growth in arrivals to Hong Kong in the first half of the year.

In August 2019, visitor arrivals dropped by 40 per cent compared to the previous year, reflecting the escalation of unrest. Travel is something which people plan in advance, and so events which take place now affect bookings for future trips. Therefore it is unlikely that visitor arrivals will recover before the end of the year, even if the protests were to stop immediately. Hotel occupancy has been severely reduced, with revenues from hotel room sales down by about 50 per cent. The retail sector, for which shopping by tourists represents a major market, has also been severely hit.

Hong Kong’s major tourist market is Mainland China. In 2018, 78 per cent of all visitors to Hong Kong came from the Mainland. The Mainland Chinese authorities and media have condemned the protests in the strongest terms, suggesting that they are being orchestrated by foreign powers and pose a threat to national security. At the same time, they have carried out a disinformation campaign on various international social media platforms that are banned in Mainland China, such as Facebook, Twitter and YouTube.

Hong Kong University tracks social media censorship in China and the second most common term that appears in the censored posts over the past two months is ‘Hong Kong’. There was a similar spike in censorship in 2014 during the ‘Occupy Central’ protest, which made assessments of how Mainland Chinese felt about travelling to Hong Kong unreliable. In such an environment, it is expected that potential Chinese visitors will stay away from Hong Kong for now. Thus, those businesses that are heavily dependent on visitors from the Mainland and group tours have been highly affected.

Similarly, while figures from the World Tourism Organisation (UNWTO) indicate that 52 per cent of all visitors to the Mainland come from Hong Kong, reports of immigration authorities on the Mainland checking the mobile phones of arriving Hongkongers (and questioning and detaining any who have photographs or texts appearing to support the protests) have made Hong Kong residents wary of visiting Mainland China. As a result, not only are visitor numbers from Mainland China to Hong Kong affected, but the reverse is also likely to be true, despite a lack of statistical confirmation.

Looking further afield, are international visitors likely to come to Hong Kong in similar or higher numbers than before over the medium term? This depends very much on the final outcome of the protests, which at present is impossible to predict.

There are concerns that the People’s Liberation Army (PLA) will come to crush the protests, or that the central government in Beijing will put an end to Hong Kong’s autonomy, both of which scenarios would likely result in an exodus of international companies from Hong Kong and the city losing its international standing. Some people hope that the protests will calm down with the start of the new academic year. Alternatively, it might be possible for the government to find a political solution that will appease the people of Hong Kong and so end the crisis.

According to panel data from 111 countries, political crises affect medium-income countries the most. These countries tend to be newly emerging destinations which are not yet established as safe places to visit and have yet to develop a global brand. In contrast, highly developed destinations – of which Hong Kong is one – are more likely to regain their previous visitor levels relatively quickly following a period of turmoil.

Within the Asia-Pacific region, Thailand and Fiji both serve as examples. Thailand experienced a political crisis that resulted in a military coup. However, there was only one year which saw negative growth in visitor numbers following the coup, and Thailand was able to recover quickly. Fiji has experienced several coups since gaining independence but none of them has had any long-lasting effects, even though Fiji is not the cheapest tourist destination in the world nor easily reached.

We can also take Hong Kong as an example. In 2014, the Occupy Central movement effectively shut down Hong Kong’s city centre. However, it is hard to assess what direct impact the movement may have had. There was no reduction in overall visitor numbers during the months of the Occupy Central protest, but a fall was seen later in 2015.

It is important to note that Occupy Central occurred at the same time as the commodity prices crisis, which witnessed the devaluation of many global currencies. Furthermore, 2015 was also a year which saw several anti-tourist and anti-parallel trading protests. While visitor numbers to Hong Kong dipped in 2015/16, they recovered rapidly in 2017/18.

Hong Kong enjoys worldwide recognition, it has great transportation and infrastructure, and it is a unique city with many attractions and a highly skilled workforce. Unless the events develop dramatically to the extent that most of the above is lost, Hong Kong’s tourism sector is likely to recover quickly.

So far, the image of Hong Kong as an open international city has been threatened, but not tarnished. In the meantime, it would be wise for managers and policy-makers to plan on how to diversify inbound markets, improve tourism offerings in Hong Kong, shift the focus away from bare numbers to designing memorable and transformational experiences, and become more responsible and operate in a way that contributes to the wellbeing of Hongkongers while taking care of the environment.

These are difficult times for all Hongkongers, whichever side of the political divide they are on. Nevertheless, the Lion Rock spirit of overcoming hardships and striving for a better life persists. Hong Kong is an exciting city that touches the hearts of all those who visit or live here. Hopefully, soon Hong Kong will be able to welcome visitors again and demonstrate its spirit once more.

Denis Tolkach is an Assistant Professor at the School of Hotel and Tourism Management at Hong Kong Polytechnic University. His research focuses on sustainable tourism development and tourism ethics. He recently co-authored an article on the ‘Ethics of Chinese and Western Tourists in Hong Kong’ which can be found here.

The Long Read: The moment of reckoning for Kashmir
Beyond the protests: The social identity formation of Hong Kong’s citizens