The deforestation dilemma in Myanmar 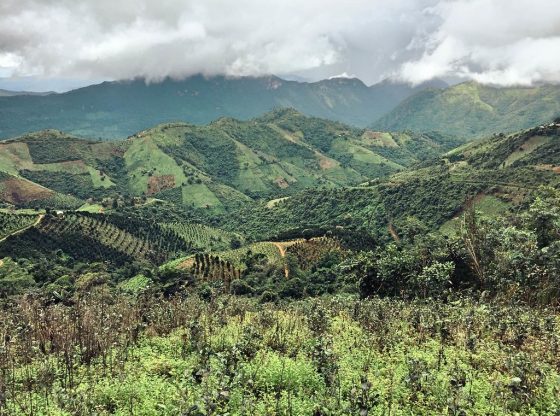 Deforestation is a widely discussed topic in Myanmar, although it is not clear how serious the attempts to reduce it really are. According to the United Nations Food and Agriculture Organisation (FAO), the annual loss of forest between 2010 and 2015 was 1.3 million acres, or 2 per cent of the country’s trees. This means that Myanmar has the third-highest rate of deforestation in the world after Brazil and Indonesia. To put this into context, before the military junta came to power in 1988, the rate of deforestation was only 0.25 per cent per annum. This jumped to an annual rate of 1.2 per cent over the following decade as the government opened up the timber market to the private sector, and has increased further in the intermittent years, highlighting the dangerous spike seen in Myanmar since the military secured its position in 1988.

Only 27 per cent of forest reserves remain intact, while 55 per cent are designated as ‘degraded’ and a further 15 per cent as totally depleted ‘non-forest’

Estimates of deforestation rates in Myanmar vary between institutions using different methods of measurement, but what is clear is that the phenomenon is on the rise. This trend is surprising and worrying in equal measure for a country previously known for its sound management of tropical forests. Scientific forest management was introduced into Myanmar around 1856 by the German scientist Dr Dietrich Brandis, who was employed by the British government to manage forest systematically in both India and Burma during the colonial period.

Dr Brandis was well-renowned for the development of silvicultural methods such as the Burma Selection System (BSS) and Taungya. The BSS was used for regulating timber harvests from the natural teak forest without damaging the forest ecosystem or diminishing the teak stock, while Taungya was an agro-silvicultural method of reforestation using seasonal agricultural crops. Under these sound management systems, deforestation was kept to a minimum during British colonial rule.

At the time of independence in 1948, forests were believed to account for as much as 75 per cent of Myanmar’s total land area. Even though the forest management systems inherited from the colonial period were disrupted during the country’s socialist era (1962–1988), the first forest survey produced from satellite data in 1975 revealed that forest cover remained in good shape, accounting for 62 per cent of total land area.

As already outlined, the military coup in 1988 represented the beginning of a new era of rapid deforestation, but the Myanmar Forest Department seems reluctant to admit the reality of deforestation. Although it has collaborated with the FAO to participate in the periodical Global Forest Resource Assessment exercise, there is resistance to making anti-deforestation a priority. The National Forest Policy that was formulated in 1995 with technical assistance from the FAO covered many important aspects of strategy and tactics for forest management, but crucially failed to identify the issue of deforestation explicitly as a policy priority. Instead, shifting cultivation practices by local ethnic farmers was blamed as the preeminent cause of forest destruction.

This is an indication of another fundamental dilemma of deforestation in Myanmar: understanding the causes of the degradation and depletion of forest resources. Along with shifting cultivation practices, firewood production by rural communities has been cited as a primary cause of deforestation by many bureaucrats. However, civil society organisations argue that this is primarily for urban supply and has nothing to do with rural village consumption. They recommend that to meet household and industrial energy demands in urban areas, policy measures such as importing kerosene and switching to other fuel sources would relieve pressure on the forests. This is one of the main actions recommended in the National Forest Policy.

In the background, the ongoing civil war is also a fundamental factor in the deforestation of Myanmar. More than 20 ethnic groups have been fighting the Tatmadaw (Myanmar military) for over 70 years, demanding self-determination and federalism. Their armed struggles have been funded by the extraction of natural resources such as timber, jade, gold and minerals, which is causing deforestation in ethnic regions. However, not all of the ethnic armed organisations (EAO) are contributing to deforestation in the areas under their control. For example, one such EAO, the Karen National Union (KNU), is environmentally conscious and has even established its own wildlife sanctuary and nature conservation area based on indigenous knowledge and cultural practices.

Between 2002 and 2014 it was found that government-controlled areas were associated with higher rates of deforestation than the EAO-controlled areas in the regions of Mon, Karen and Tanintharyi. There was little difference in Shan state, where many EAOs are active, with only slightly higher levels of deforestation in the EAO-controlled parts of Shan. This can largely be accounted for by the extensive conversion of forest land into rubber plantations in Wa, which shares a border with China. In Kayah, the militia groups who work with the Tatmadaw for counter-insurgency campaigns were more responsible than other EAOs for higher levels of deforestation.

Although rural communities and EAOs have been blamed for deforestation, the level of deforestation and loss of forest cover in areas legally protected by the Myanmar Forest Department have never been disclosed. To date, approximately 30 per cent of Myanmar’s total land is under the jurisdiction of the Forest Department, although the aim is to increase this to 40 per cent by 2030 in conjunction with the ‘intended nationally determined contribution’ (INDC) against global warming.

However, while attempts have been made to increase the level of coverage, the state of the forest within the existing forest reserve areas remains a problem. As shown in Figure 1, only 27 per cent of forest reserves remain intact, while 55 per cent are designated as ‘degraded’ and a further 15 per cent as totally depleted ‘non-forest’. In real terms, the ‘intact’ forest within the reserves is equivalent to just 7 per cent of Myanmar’s total land area. With only 5 per cent of total land designated as a protected area for biodiversity, combining both figures highlights that intact forests under the jurisdiction of the Myanmar Forest Department account for a mere 12 per cent of the country’s land area. 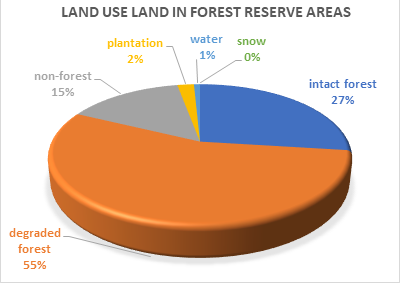 According to satellite data, almost a quarter of the total land seems to be ‘intact’, meaning that half of the country’s successful forest remains outside government control and hence in the hands of local communities. However, it is practically impossible to take this unclassified forest away from local communities and designate it as forest reserve areas. Any attempt to do so would be seen as a government land grab or ‘green-grabbing’. Figure 2 illustrates the extent of deforestation in areas controlled by the government and EAOs, respectively. 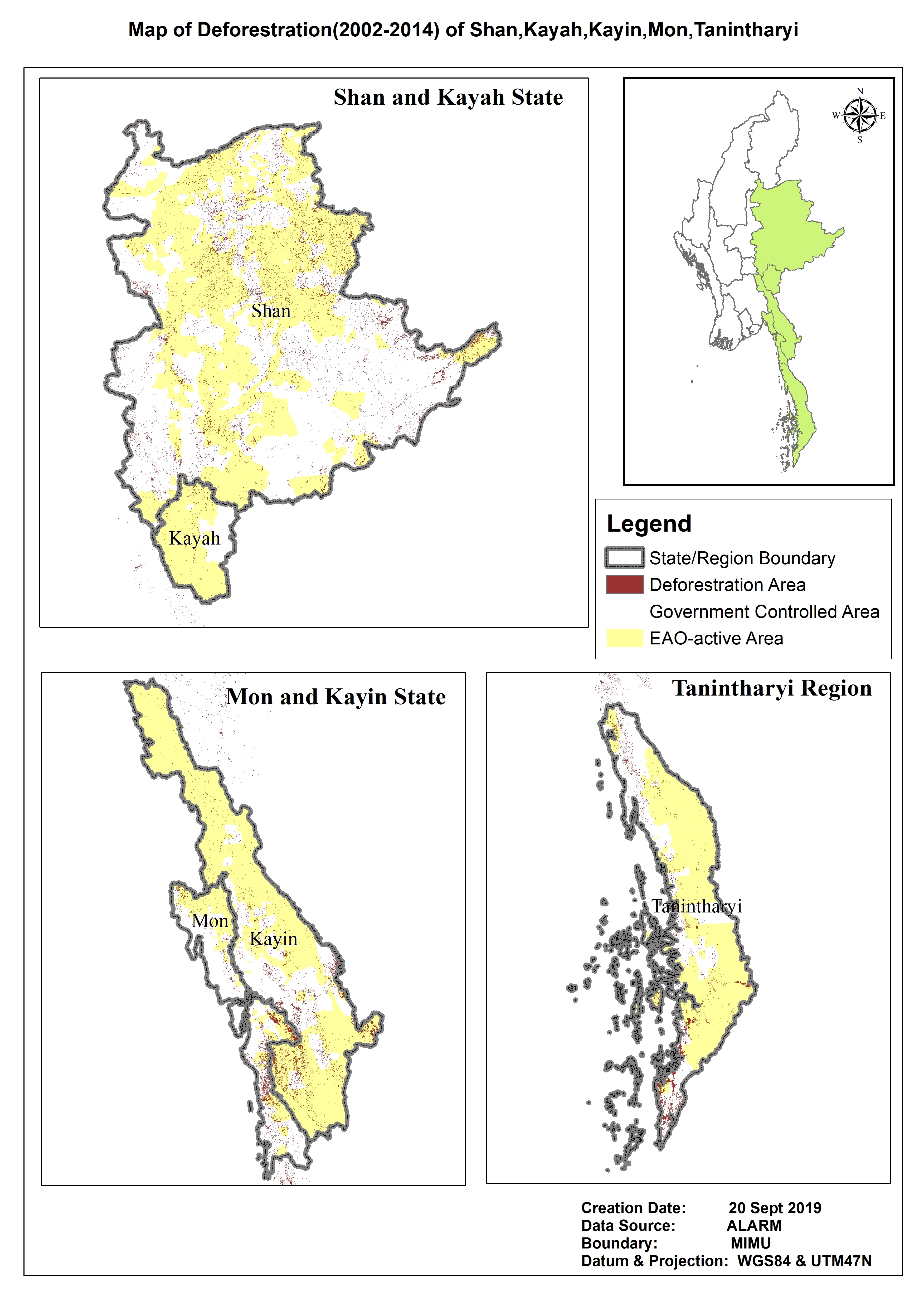 The biggest question arising from the above analysis surrounds the disappearance of forest cover within forest reserves. According to the analysis in a 2015 report by the Asian Development Bank, the major drivers of deforestation are timber production (both legal and illegal logging) and concessions of commercial agricultural land. Mining is also considered a catalyst for deforestation, but a study carried out by the Smithsonian Institute and EcoDev, a local non-governmental organisation, has rejected this assertion, highlighting that mining accounts for only 1 per cent of total land use.

A 2017 report by the Myanmar government on the drivers of deforestation cited all of these factors as major concerns, but debates continue to rage over the degree to which each factor impacts on deforestation. Such ambiguity has misled policymakers in regard to identifying the real factors that need to be prioritised in order to fight deforestation. In turn, this has led to illogical, inconsistent and inefficient forestry planning policies which have hampered efforts.

A clear example of this is the decision to set the annual target for forest plantation at 50,000 acres – despite forest losses reportedly reaching 1 to 2 million acres per year – hence far below the level of intervention needed to offset the impact. Additionally, attempts at ‘green-grabbing’ to meet the policy target have threatened the success of the national peace dialogue and generated insecurity around the land rights of ethnic minorities.

In sum, Myanmar’s national forest policy should be reviewed and reformulated, designating deforestation as a major policy issue and providing politically appropriate measures to address the problem for the good of the people and the environment.

Win Myo Thu is a co-founder and managing director of ECODEV/ALARM, a leading non-governmental organisation advocating for civil society development and environmental governance in Myanmar. He is a development practitioner for defending the resource rights of the poor and most disadvantaged communities.