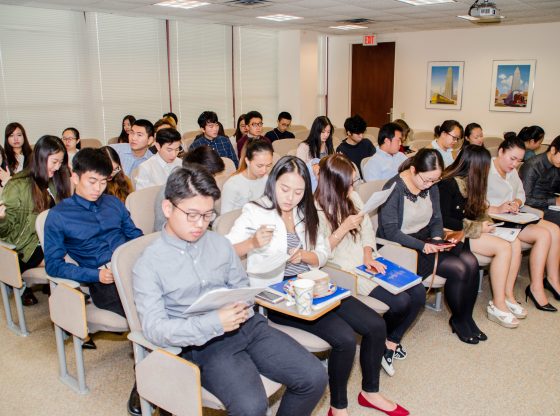 Chinese students are the largest group of international students from any one country at British universities, and their numbers continue to grow, reaching a total of more than 106,000 in 2017–18. This figure is five times larger than that of any other national group.

The high proportion of Chinese students means that it is essential for administrators and academics in British universities to have good data on who these students are and why they come to study here. Although many studies have covered some of these issues, there has been a lack of representative data or comparisons with these students’ peers both in the UK and at home in China.

The Bright Futures project, for which we conducted the first representative sample survey of Chinese international undergraduates and taught Masters students in the UK (research students were not included) fills this gap. We surveyed over 8,000 students, comparing and contrasting the experiences of students from the People’s Republic of China (PRC) who have moved to either the UK or Germany to study with those who opted to stay at home in China for their higher education. Control groups of home students in the UK and Germany were also surveyed.

British universities are recruiting lower numbers of excellent students than they might, particularly for science and technology degrees

Among the top reasons Chinese students give for choosing to enrol on a degree programme in the UK is ‘quality of education’, with 93 per cent of Chinese students in the Bright Futures survey rating this as ‘very or extremely important’ in their decision. One of the measures of ‘quality’ is university ranking, but we find that what constitutes ‘quality’ has an even broader meaning for these students.

It is no surprise to find that Chinese students who want to study abroad are sensitive to the ranking of universities; after all, the first global university rankings (Academic Rankings of World Universities) were created by Shanghai Jiao Tong University in connection with the official aim of developing ‘world-class’ higher education institutions.

Categorising high schools and universities according to rank has long been official practice in China and, as in other parts of the world, the Chinese government uses these categorisations to concentrate funding on developing the research and infrastructure capacity of certain ‘key’ universities. Thus, Chinese students are primed to see ranking as crucially important in choosing where to study, whether in China or abroad, and this is a factor that has also increased in importance for students all around the world.

Both in choosing to study abroad and in their specific choice of the UK as a study destination, the top three reasons given by Chinese international students reveal the crucial influence of rankings: rated as ‘very or extremely important’ were (1) the ranking of the subject they wish to study at that university (89%); (2) the availability of the student’s preferred subject (87%); and (3) the overall ranking of the university (83%).

However, other factors which these students also rated as ‘very or extremely important’ indicate that they have more diffuse goals when deciding to study overseas. For example, as well as enhancing their career prospects (83%), students in our survey wanted to realise their worth as a person (82%), gain new experiences (89%), and meet people from different backgrounds (83%).

The underlying attitudes in regard to higher education building a broadly oriented person and offering an expression of individuality as conveyed through these findings are widely shared across our sample, including among home students in the UK and Germany and Chinese peers in the PRC. This finding challenges the stereotype of Chinese students as being particularly instrumentally motivated, which is one of several stereotypical representations our findings call into question, as outlined in our policy report.

While the high motivation of these students contributes to aspirations towards excellence in the UK higher education sector, patterns of recruitment do not necessarily serve universities’ aims in achieving this. Chinese students are concentrated in certain subjects (reflected both in our survey and in official data from the Higher Education Statistics Agency, HESA), indicating that British universities are recruiting lower numbers of excellent students than they might, particularly for science and technology degrees.

In the UK, the predominance of Chinese students in Business Studies and Economics (51 per cent of undergraduates and 56 per cent of Masters students) contrasts with their relative underrepresentation in Science, Technology, Engineering and Mathematics (STEM) subjects, the social sciences and humanities, and ‘other’ disciplines (which includes Law and Medicine).

By contrast, Germany attracts many more STEM students (61% of undergraduates and Masters students). Comparing what subjects Chinese students enrol on at Chinese universities with the distribution across disciplines of their peers in the UK also highlights this point, emphasising that British universities have scope to expand their recruitment of Chinese students, especially in STEM subjects.

Two related factors show that recruiting more excellent students across the range of subjects is still a possibility for UK universities, particularly at Masters level. First, there is a shortage of places in the top Chinese universities, especially for Masters programmes, which still award only 12 per cent of all degrees. Second, 85 per cent of Chinese undergraduates in our survey said they planned to continue studying after completing their current degree.

However, for the UK, a major barrier to expansion is the high fees international students have to pay. In our survey in China, 35 per cent of students at top Chinese universities said that the main reason they had to drop consideration of studying abroad was the cost. If British universities were to offer more needs- and merit-based scholarships that are not restricted to UK nationals, there would undoubtedly be many excellent Chinese students competing for these places.

Universities need to realise that international students are not in the UK simply in order to build their CVs. Their aspirations towards excellence also apply to other aspects of their university education, notably their desire for broader experiences and self-building. These are dimensions of university education that should be addressed more generally by higher education providers, not only for international students, but for home students as well.

Prof. Yasemin Soysal is Professor of Sociology and a member of the Centre for Migration Studies and the Centre for Human Rights at the University of Essex.

Dr Sophia Woodman is a Senior Lecturer at the University of Edinburgh School of Social and Political Science.

The deforestation dilemma in Myanmar
Germany has an AI strategy: How does it stack up against China’s? Part I