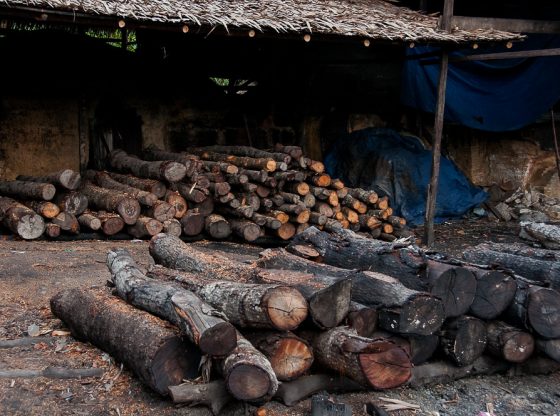 Addressing climate change is a complex problem that does not just depend on cutting fossil fuel emissions in developed countries. Developing countries house large forest areas that absorb and store massive quantities of carbon which are vital in addressing the carbon emissions problem. However, they are subject to massive deforestation practices as well.

Forest areas are often managed by indigenous people and forest dwellers, but their role is of such major importance that it needs to be supported both nationally and internationally. The United Nations Collaborative Programme on Reducing Emissions from Deforestation and Forest Degradation in Developing Countries (UN-REDD) estimates that 60 million indigenous people are completely dependent on forests, with another 350 million people highly dependent on forests for their livelihoods. An unquantifiable number of indigenous peoples worldwide have a ‘connection to the land’ which defines their cultural existence. Principle 22 of The Rio Declaration of 1992 states:

‘Indigenous people and their communities and other local communities have a vital role in environmental management and development because of their knowledge and traditional practices. States should recognize and duly support their identity, culture and interests and enable their effective participation in the achievement of sustainable development.’

The top-down approach to forest management by governments does not work, because the decision-making does not involve the forest dwellers and indigenous people

Forest people are generally poor, which makes it difficult to quantify the economic and cultural value of a retained forest or, therefore, how to compensate individuals for a ‘lost opportunity’ and communities for their forest work. Attempts by governments and non-governmental organisations (NGOs) to find a solution have largely failed, even though preserving terrestrial sinks is cost effective.

In her contribution to the Twelfth World Forestry Congress in 2003, Susan Braatz claimed that responsibility for the implementation of deforestation programmes lies with governments themselves. However, the challenges associated with governance in developing countries mean that international polices and legislative frameworks are required to support local initiatives. Avoiding deforestation requires legal frameworks which encompass partnership arrangements between government, business and community groups. Implicit in this strategy is the need for well-developed corporate governance and a lack of corruption.

Initiatives to protect forests are complex, as they vary according to their type and location as well as ownership and stakeholder and cultural interests. The economic status of the country in which they are located also influences their management. An understanding of these issues is essential in order to overcome the challenge of tackling current deforestation rates. The protection of forests requires support from a diverse range of people striving to manage the natural world through effective legal frameworks that prescribe sustainable management practices and, where possible, avoid deforestation altogether.

In addition, developing countries often require personnel and technical assistance from beyond their national borders in order to address the problem of deforestation. Unfortunately, however, corrupt governments are not in favour of such intervention because they benefit from selling off the country’s natural resources.

In Brazil, for example, deforestation is having a detrimental effect on the lives of millions of indigenous people who are essentially being ignored and losing the right to their lands. The central government supports international corporations in obtaining forest products and minerals and clearing land for cattle grazing. Papua New Guinea’s government similarly supports deforestation and the mining of minerals, ignoring the land’s indigenous owners, which has given way to social unrest.

The top-down approach to forest management by governments does not work, because the decision-making does not involve the forest dwellers and indigenous people who have a vested interest in specific forests and are dependent on the forest for their livelihood and culture. Article 2(d) of the Non Legally Binding Authoritative Statement of ‘Principles for a Global Consensus on the Management, Conservation and Sustainable Development of all Types of Forests’ recognises the need for the participation of local communities, indigenous people, industries, labour, NGOs, individuals, forest dwellers and women in the development and implementation and planning of national forest policies.

There are already some good examples of this, such as Brazil’s ‘Juma Sustainable Development Reserve Project for Reducing Greenhouse Gas Emissions through Sustainable Development’, introduced to preserve forests of high conservation value in an area under great pressure from the conversion of forest to land use. The project aims to reduce emissions from deforestation and sell the credits gained in order to ensure the continuous financing of the project, which will monitor and control deforestation at the project site. The Juma Reserve covers an area of 589,612.8 ha and the project expects to prevent the deforestation of about 440 thousand hectares which would have been expected to release over 253 million tons of CO2 into the atmosphere.

The increasing establishment of forest plantations purely for the production of wood for consumer markets or palm oil, although necessary, cannot be undertaken at the expense of existing forests. Plantations should only be established on land that is used purely for this purpose, or on land that has been used for agricultural purposes or for cattle grazing in the past and is no longer financially viable or suitable for these purposes. Responsible corporate investment strategies can successfully achieve this end and at the same time plug into the existing and expanding carbon trading markets.

Forests need sustainable forest management in order to avoid being degraded. Those who can best undertake this role are arguably forest dwellers and indigenous people. However, in order for this to become a sustainable reality, it must be ensured that these people are paid for their efforts and, where required, provided with the necessary equipment and training. The Juma project in Brazil incorporates these aims and should thus be taken as a blueprint for further projects.

This short article has sought to identify the main problems which need to be tackled in order to avoid deforestation. Deforestation strategies need the benefit of compensation schemes funded through international sources in order to protect the livelihood of the local forest people and allow them to manage these important sites while at the same time addressing climate change.

Dr Patricia Blazey is a solicitor and barrister (NSW, ACT, High Court of Australia, Federal Court of Australia) and a Senior Lecturer in Law at Macquarie University, Sydney, Australia. She has written extensively on the impact of deforestation and climate change on indigenous communities.

Germany has an AI strategy: How does it stack up against China’s? Part I
The Long Read: Gandhi’s racism