Line of Control: If the red line is crossed 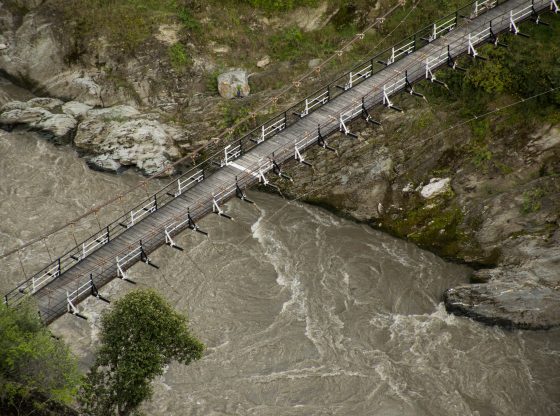 The India-Pakistan Simla Agreement in 1949 transformed the ceasefire line between the two countries along Jammu and Kashmir into what became known as the Line of Control (LoC). Both India and Pakistan committed to respect the sanctity of the LoC and not to alter it unilaterally. Following India’s revocation of Article 370 on 5 August 2019, however, the status of the LoC is now questionable, as is the legitimacy of the Simla Agreement.

The Jammu and Kashmir Liberation Front (JKLF), a pro-independence movement on both sides of the LoC, rejects the existence of the border, calling it similar to the Berlin Wall. The JKLF has now vowed to dismantle the LoC and emancipate the besieged eight million Muslim Kashmiris in Indian-controlled Kashmir (IOK) by launching a ‘Kashmir Freedom March’. Reports of serious human rights violations by the Indian security forces against Muslim Kashmiris further augment the popular sentiment in Azad Jammu and Kashmir (AJK) on the Pakistani side of the LoC, as the people there can no longer tolerate the ethnic cleansing and genocide of their brethren in IOK.

India cannot prevent the crossing of the LoC provided that those who want to undo the 72-year-old division of Kashmir are bold, organised and determined in accomplishing their objective

Why, then, is the Pakistani state advising the people of AJK, particularly the JKLF, not to cross the LoC? If the LoC is not crossed and scores do not challenge India’s brutality in IOK, what can deter New Delhi from using its massive military and paramilitary force to kill, injure, arrest and rape Muslim Kashmiris? Given that India has experienced no concerted diplomatic pressure against its action on 5 August and remains unaffected by peaceful protests, will it perhaps understand the language of force?

Pakistan’s Prime Minister Imran Khan has several times warned the people of AJK and the JKLF’s members and supporters not to attempt to cross the LoC, as such an act will provide India with a chance to blame Pakistan for supporting armed groups and fomenting terrorism. But there is a difference between a peaceful march across the LoC and cross-border terrorism. Tearing down the LoC is only possible if popular support is mobilised on both sides, as no matter how well-armed the Indian military is, it cannot prevent millions of unarmed people from marching for the unification of Kashmir.

India cannot prevent the crossing of the LoC provided that those who want to undo the 72-year-old division of Kashmir are bold, organised and determined in accomplishing their objective. Both morally and legally, India is on the receiving end and cannot prevent the tide of millions of Kashmiris. Yet the government of Narendra Modi in New Delhi is confident that it can manage the existing crisis in IOK. On 7 October 2019, the Governor of IOK, Satya Pal Malik, made a statement which allows for tourism to resume from 10 October. He also claimed the gradual return of normality in the occupied Kashmir Valley.

However, Pakistan should not feel apologetic or defensive when dealing with the issue of crossing the LoC, for three reasons. First, if India gets away with annexing IOK through its Jammu and Kashmir Reorganisation Act, there will not be even a remote possibility of seeking self-determination for the people there. Popular revolt in the Valley, supported by a peaceful march across the LoC, will test the Indian military’s capability to crush a movement aimed at dismantling the LoC.

If India was to start receiving hundreds of dead bodies on a daily basis from IOK, it would have no other option but to withdraw from the region. This time, however, preconceived notions of India blaming Pakistan for supporting terrorism will not help because the overwhelming majority of the people of the Valley are no longer prepared to tolerate the Indian occupation. If their counterparts in AJK want to help them in putting an end to India’s brutality, it is their legitimate right to do so.

Second, how can India blame Pakistan or AJK for interfering in its internal affairs when it openly helped and assisted the Mukti Bahini, the Bangladeshi liberation force, against the Pakistani state in the 1970s? India crossed all limits by attacking what was then East Pakistan on 21 November 1971, even though East Pakistan was legally a part of Pakistan.

The governance of IOK is disputed, and after revoking Article 370, New Delhi no longer has any moral or legal authority over the territory. If India openly interfered in the internal affairs of Pakistan in 1971, how can it deny its western neighbour the chance of meddling in the affairs of the areas of Kashmir which India occupies? If the Kashmiri liberation movement is genuine but India has no electoral or legal mandate in Jammu and Kashmir, how can it stop the popular march led by the JKLF from crossing the LoC?

Pakistan’s predicament is its failure to strike when the iron is hot, as it has missed several opportunities to help emancipate the people of IOK. If Islamabad fears that crossing the LoC will lead to Indian retaliation and escalate the conflict, such apprehensions are because of a weak economy, political schisms, bad governance, corruption and nepotism in the country.

When those who matter politically in Pakistan are unable to abandon their comfort zones and render practical support to the beleaguered population of IOK, one cannot expect a bold and courageous policy. Otherwise, had Pakistan’s house been in order, it would have chosen to run the risk of rendering open support to the oppressed people of IOK.

If crossing the LoC is the legitimate right of those in AJK, why then should they be stopped? If the Kashmiri freedom marchers are ready to take the risk of Indian retaliation, why are they prevented from exercising their right to do so? According to Resolution 47 of the United Nations Security Council (UNSC), crossing the ceasefire line (now the LoC) was declared a lawful activity. The people of AJK wish to exercise their legal right as granted to them by the UN.

Third, following its military intervention in former East Pakistan in 1971, India intervened in Sri Lanka in 1987 with its so-called peacekeeping force. India’s interventions in Nepal and the Maldives are also well known. Unfortunately, India has similarly been able to get away with its blatant intervention and occupation of the Siachen Glacier in 1984, as Pakistan failed to regain its lost territory.

The JKLF justifies its march to Srinagar by arguing that since 5 August 2019, the Muslim-majority Valley of Kashmir has been transformed into a prison where eight million people are holed up, cut off from the rest of the world, and living a miserable life due to the lockdown. There is an acute shortage of life-saving drugs and the Indian military violates the privacy of Kashmiri Muslims under the cover of siege and search operations. The availability of food as well as other necessities is erratic. At this critical moment, members of the JKLF along with other pro-independence groups consider it their moral duty to help their counterparts in IOK.

In order to continue India’s provocative threats to Pakistan, the Indian Defence Minister Rajnath Singh advised Islamabad not to cross the red line and to remember Pakistan’s fate in the wars of 1965 and 1971. He warned that this time his country would teach Pakistan such a lesson that it would forget the humiliation of 1971. So should Pakistan take a defensive posture in the wake of the growing Indian provocation, particularly since August 2019? Or should it seize the opportunity by actively supporting pro-independence Kashmiri groups?

Democracy, deliberation and the state of Tamil Nadu
Bearing the burden: The cost of the Reko Diq (Balochistan) disaster