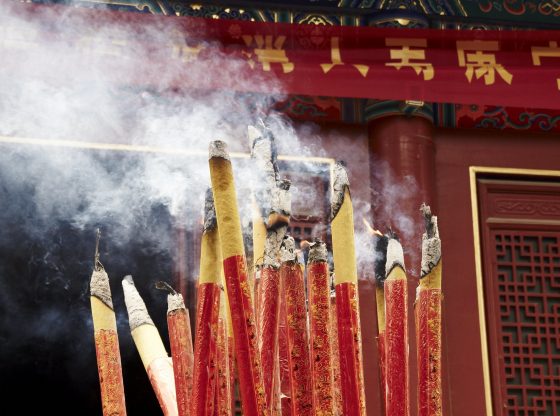 Beginning in the earliest grades, Chinese students are subjected to anti-religious propaganda. They learn that religion is a ‘feudal superstition’ (封建迷信); a remnant of the past that holds the country back and is responsible for many of its problems.

In Tibet, Buddhist monasteries have police stations on their premises, and monks and nuns are under constant surveillance. At least one million Uighurs in Muslim-majority Xinjiang are incarcerated in concentration camps where they are forced to repeat anti-Muslim statements. The men are required to shave their beards, and in order to be released, prisoners must eat pork and desecrate copies of the Koran.

The government describes the camps as ‘job-training centres’ where students eagerly learn skills that will help them improve their economic fortunes. But images of prison-like structures surrounded by high chain-link fences topped by barbed wire make it clear that this is a massive, government-funded assault on religion whose purpose is to force Muslims to abandon their faith. This has also been corroborated by accounts of former detainees who were released and managed to reach countries where they were able to tell their stories.

In recent decades the level of repression has increased significantly. At the same time, churches, temples, and monasteries attract large numbers of devotees

The Chinese Communist Party (CCP) is officially atheist, and religious believers are forbidden to join it. At the same time, the Party claims to adhere to the constitution promulgated in 1982, which contains provisions for freedom of religion. The constitution also appears to guarantee other freedoms that are present in the legal codes of Western democracies, but closer examination reveals that it is not an instrument to which the people can appeal if their rights are infringed. Rather, it is a tool of control whose interpretation and application lie entirely in the hands of the party-state.

The Chinese Constitution only allows the practice of ‘normal religious activities’ (正常的宗教活动), narrowly defined as practices undertaken at times and places approved by the state that support the government and its policies. These include the dogma that religions are purely human creations, that God and other supernatural beings do not exist, and that all religions have a predictable trajectory from inception to increasing popularity, followed by their inevitable decline and disappearance.

Mao Zedong (1893–1976), China’s paramount leader following the revolution of 1949 until his death, declared that because backward people are attached to their religions, the Party should allow this process to unfold according to its preordained teleology, with additional help and guidance in the form of propaganda and education in science and rationality.

In recent decades, however, the level of repression has increased significantly. At the same time, churches, temples and monasteries are attracting large numbers of devotees, and even official figures admit an overall surge in religious attachment across the country. Government sources state that there are 200 million religious believers today, but external experts often estimate more than double that figure.

Religious groups that agree to abide by the government’s restrictions are grudgingly allowed to continue their activities. However, they are expected to work to instil patriotic values in their congregations and they must also accede to the principle that their beliefs and practices are superstitious nonsense. They also have to agree to work with the government in its efforts to speed up the inevitable demise of all religions, including their own. This is what ‘normal religious activity’ looks like to the CCP.

So why is the Chinese Communist Party – which allows no opposition and controls the world’s largest army and second-largest economy – afraid of Catholics attending mass, Buddhist monks chanting mantras, or Muslims gathered for Friday prayers? Part of the answer lies in China’s past, and the other side of the story relates to more recent events and the Party’s interpretation of Marxism.

Religion and the state have long had a contentious relationship in China. There have been a number of religion-inspired movements, such as the Yellow Turbans (黄巾) in the second century CE, who engaged in armed rebellion against different governments and in some cases severely weakened them. The most recent threat, however, came with the demise of the Soviet Union and the liberation of its conquered territories in Eastern Europe – events which were celebrated around the world as a triumph of freedom but viewed as a global catastrophe by China’s leaders. The overthrow of the Soviet regime signified a repudiation of the sort of Marxism-Leninism that is still the official dogma of the People’s Republic of China (PRC) today.

The CCP dispatched researchers to Russia and Poland to determine what had gone wrong there. However, Party ideology prevented anyone from discussing the main problems, such as repression, economic stagnation and the horrors of the Soviet gulag. Instead, the conclusion was that religion was to blame. The impetus of revolution in Eastern Europe had nothing to do with flaws in the implementation of Marxism-Leninism, but rather lay in the persistence of religious faith. Consequently, the CCP’s current religion policies are an extension of the lessons drawn from analysing China’s own history and the demise of the ideologically aligned European Marxist states.

If all of this seems to be a farfetched over-reaction to a non-existent threat and overreach by the CCP, then that’s because it is. But it is also important to recognise the role of ideology and propaganda in China. Right from its inception, the PRC has been a propaganda state. The government controls all media outlets, and propaganda pervades all levels of society. The CCP’s efforts to control opinion are based on a belief in the infinite malleability of the public psyche.

Inspired by American propagandists including Walter Lipmann (1889–1974) and Edward Bernays (1891–1995), the CCP assumes that if a government wants to change the content of its citizens’ beliefs, it can. This is the background to a nationwide programme of ‘patriotic education’ (爱国主义教育), which is particularly pervasive in minority areas like Tibet and Xinjiang.

Religious believers, particularly leaders such as Buddhist monks and nuns or Muslim imams, are forced to participate in the ongoing propaganda indoctrination and to publicly endorse government-produced versions of their faiths. Chinese Christians, for example, are expected to reject salvation by faith and the Resurrection (because Marxist materialism denies the possibility of life after death). Buddhists are required to adopt a version of their religion created by non-Buddhists that fails to include most of the core principles and practices encoded in their scriptures.

Is such propaganda likely to succeed? Past history suggests that it will not, and adherence to traditional articles of faith still remains strong in Tibet and Xinjiang. Moreover, recent studies have concluded that when belief in a counter-narrative is strong, it tends to persist despite any level of coercion or propaganda.

My recent book analyses CCP propaganda and the strategies of resistance employed by Tibetan Buddhists in response. During recent visits to the region, I have experienced a climate of fear far exceeding anything I have encountered before, and attacks on religion have become more intrusive and widespread. But Tibetans’ faith appears to remain strong, and religious practice has become an act of resistance against the state.

The CCP’s efforts to subvert religion and force believers to adopt versions of their faiths that narrowly equate them with Chinese patriotism have clearly failed to achieve their objective. However, the Party is an authoritarian organisation, and its leaders have seldom demonstrated an ability to change course when policies fail. So it is likely that the repression will continue, and those religious adherents who bear the brunt of the coercion will become increasingly resistant to their government’s message. Given this, perhaps it is not surprising that the Party views the persistence of such beliefs as an existential threat.

Dr John Powers is a Research Professor at the Alfred Deakin Institute at Deakin University, Australia. His recent book The Buddha Party: How the People’s Republic of China Works to Define and Control Tibetan Buddhism (2016) is published by Oxford University Press.

Bearing the burden: The cost of the Reko Diq (Balochistan) disaster
Setting the stage for race baiting in Malaysia