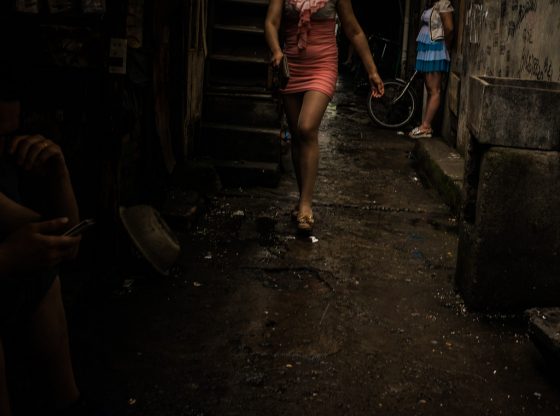 Over the course of twenty-seven months of field research devoted to studying female sex workers in China, I learned that Chinese women in the sex trade (xiaojie) must frequently be on the move. These flexible and savvy women cope with their insecure lifestyle and the consequent changes in labour conditions and income by engaging in multiple career trajectories and ongoing negotiations in both the informal and formal economies.

By adopting such risk-management strategies, these women are able to mitigate the effects of the unpredictable availability of financial resources, manage their households better, maintain or improve their own living status, and reciprocate with colleagues.

Since the sex trade is illegal in China, and female sex workers are fiercely stigmatised, women rarely work close to home. Instead, they tend to migrate to distant places within or across provinces. Although current estimates of the illegal sex worker population vary dramatically, it is assumed that roughly three to ten million women are involved in the sex trade in urban and suburban areas in China.

Adapting to the gig economy, the women move not only among different sex venues and through various modes of work, but also between different cities and regions. In addition, they spend a not insignificant amount of time travelling together and visiting each other’s homes. Some of these internal migrants will go back to their home village seasonally to help with farming. Only after extensive data analysis did I come to understand that this population’s high degree of job mobility is an efficient strategy for maximising benefits and achieving other personal goals.

I conducted my ethnographic fieldwork in multiple sites including Beijing and Shanghai but primarily in Haikou, the capital city of the southernmost province, Hainan. Haikou is a southern city which retains a more culturally conservative attitude, reflected in the sexual division of labour and a belief in ‘women’s place in society’. Nonetheless, the city is a major destination for internal Chinese migrants because it offers abundant opportunities for employment. Also, because these opportunities are largely within the service sector, they are more readily available to women than to men.

The business operations at the field sites I observed showed that participants enjoy flexible work schedules, do not have a formal contract, and pay the brothel madams a commission. Participants in the survey were thirty years old on average and made CNY 4,887 (approximately USD 820) per month – a sum roughly two or three times greater than what young college graduates in the region earn, and considerably more than the women could make in their villages, where they would be unlikely to find any paid work at all.

Mobility as innovation: ‘diversifying the portfolio’

The majority of my participants adopted multiple modes of work simultaneously, depending on their individual needs and preferences. My analysis further demonstrated that each woman adopts three to four types of work on average. The reasons for this diversification were varied, depending on the social environment and each woman’s individual needs. They included a desire to have more diverse income sources in order to maximise financial gain, the achievement of personal goals (such as dating and marriage), and minimising possible risks stemming from their involvement in an outlawed and capricious trade.

That women in the sex trade strive for a significant degree of job mobility makes sense, given that this enables them to achieve a higher income. With each new work mode added, a female sex worker’s income increased by about 50 per cent (CNY 780, or approximately USD 118). Similarly, a month after switching her primary work venue, her income increased by about CNY 777 (roughly USD 117).

The timeframe within which this mobility occurs is both striking and significant: a woman in the sex trade shifts her primary income source on average once every two weeks. Although no previous studies have focused on job transitions among Chinese workers, this employment period is shorter than that found for migrants in other locations, such as Asian immigrants in Los Angeles or Chinese internal migrants in different economic sectors (e.g. factory workers with multi-year contracts), as described in some ethnographic studies.

A primary source for assisting women’s flexible labour patterns (i.e. their diversified means for soliciting male patrons) is made up of the people in their dispersed social networks, especially close – either former or current – colleagues (‘sisters’ or jiemei). The participants in my study, for example, frequently exchanged business information with one another by phone and regularly checked each other’s work conditions. When they found that other ‘sisters’ were better paid or safer, they quickly acted – often changing their work venues or promptly migrating to other cities or even other provinces.

The variations in individual women’s strategies and their resultant lived experiences can also be linked to differences in individual character, such as persistence and courage, as well as individual circumstances. Several factors motivate women to increase their job mobility, from the desire to gain a more solid financial grounding for themselves and their families to the need to ease the scheduling demands of work, as well as the hope of avoiding periodic bureaucratic interruptions and uncertainties. More subtle desires can vary from extricating themselves from the unequal power relationships with madams or long-term clients, claiming legitimate job identities (e.g. as a waitress or cook), or maintaining a good reputation in order to earn social respect.

From these and additional findings, I identify three distinct challenges to the way sex work in China is treated. First, the reality of these sex workers’ concurrent and multiple occupations –  cutting across work modes to include both sex work and other forms of employment, including work in the formal sector – presents a challenge to the official exclusion of xiaojie from the category of the ‘general population’, for xiaojie is only one aspect of these women’s identity.

The second challenge arises from the existing tiered categorisations, which label a female sex worker as a member of a particular classification according to her work venue or mode of soliciting clients. The third and final challenge relates to these women’s often concurrent adoption of venue-based work on the one hand, and intimate relationship-based, long-term liaisons with clients on the other. This inevitably problematises the exclusive global theoretical category between ‘sex work’ and ‘transactional sex’ in the Chinese context.

Dr Yeon Jung Yu is an Assistant Professor in the Department of Anthropology at the Western Washington University, USA. She is a social and medical anthropologist with a background in public health, women’s and gender studies, and East Asian studies.

*The content of this article was originally published in Flexible Labors: The Work Mobility of Female Sex Workers (FSWs) in Post-Socialist China.

Cold War 2.0
A most dangerous interaction effect in India