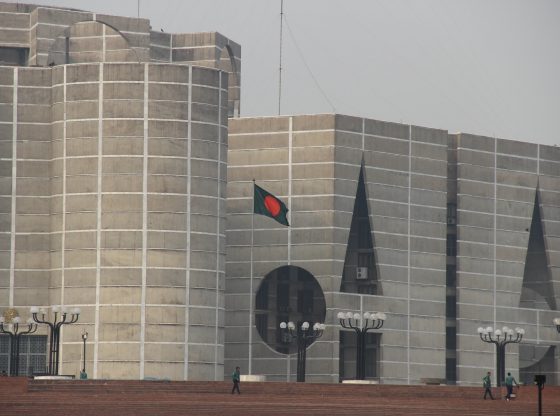 On 7 October 2019, a student named Abrar Fahad was beaten to death in Dhaka on the campus of the Bangladesh University of Engineering and Technology, allegedly by cadres of the Chhatra League, the student wing of the ruling Awami League. They had reportedly taken offence at a Facebook post in which Fahad had voiced his concerns about the seemingly unilateral nature of the bilateral agreements Bangladesh Prime Minister Sheikh Hasina had signed with India during her trip across the border earlier this month.

Hasina’s visits to Delhi have become a regular occurrence over the past decade. Media coverage on both sides of the border paints them in triumphant terms. But while details of the lavish meals prepared for the Bangladeshi premier are reported enthusiastically in the Bangladeshi media, Dhaka’s meek acceptance of India’s wishes is spoken of only in hushed tones. Despite this, Bangladeshis have now come to view India as an imperious power that treats their country as a subservient, lesser partner in a longstanding special friendship.

In Bangladesh, a student’s murder opens a window on rising anti-India sentiment across the border

Details of the seven agreements signed between the two countries during Hasina’s visit are unavailable in the public domain. After all, opacity deters scrutiny and criticism.

One of the deals related to river water. Since the Awami League first came to power in 2009, it has been promising Bangladeshis that it will strike a fair deal with India regarding the sharing of the water of the Teesta river. Now in her third term, not only does the Teesta issue remain unresolved, but Hasina has also given India the right to draw water from the Feni river.

In addition, India has been granted access to and use of Bangladesh’s two busiest seaports in Chittagong and Mongla and permitted to install a coastal surveillance radar system on Bangladeshi territory. Furthermore, a joint venture between the Indian state and a Bangladeshi private enterprise that involves Salman F Rahman, a Member of Parliament and special adviser to Hasina, will result in scarce liquefied petroleum gas being exported to India.

While the Indian media’s favourable coverage is understandable in light of the unconditional gains made by their country, the coverage in the Bangladeshi media was bafflingly positive – an indication of pressures that the press faces in the country.

Where the Bangladeshi press had failed in its duty, Fahad’s Facebook post about the matter was objective and constructive. Unlike previous instances of dissenters who had been violently silenced, he made incisive observations, not directed any criticism at Hasina, her family or any member of her party. His killing, therefore, marks a further shrinking of the already severely restricted parameters of thought that can be expressed without grave consequences in Bangladesh.

The Bangladesh University of Engineering and Technology or BUET, where Fahad studied has historically prided itself as being free from the corruption and violence of the nation’s organised student politics. However, in recent years, the Awami League’s student organisation have established a presence in BUET and other universities where they had no footprint, ironically often using the pretext of fighting Islamist terrorism.

When the Chhatra League worked closely with law enforcement agencies to brutally suppress the student demonstrations in Dhaka on August 2018, BUET’s chapter participated in identifying and assaulting protestors and handing them over to the police.

In the aftermath of Fahad’s murder, the police meted out a beating to his younger brother and the wife of one of his cousins. Additionally, the Chhatra League was assisted by the state’s Directorate General of Forces Intelligence agency in a concerted effort to present Fahad as a member of the Islamist Jamaat-e-Islami party who was part of an anti-state conspiracy in collusion with the Bangladesh Nationalist Party.

To people familiar with Bangladeshi politics, this will sound familiar. The same charges were levelled against student protesters last year. Since both the Bangladesh Nationalist Party and the Jamaat-e-Islami have been reduced to shells by the government, these claims against the Awami League’s favoured bogeyman ring hollow.

Historically, the anti-India political ideology and accompanying bigotry directed at Bangladeshi Hindus have been the preserve of the far-right in Bangladesh, and the Bangladesh Nationalist Party-Jamaat coalition has used them effectively. However, the ground has shifted significantly. The Awami League’s close ties with New Delhi have prompted a resurgence of anti-India sentiment in all sections of Bangladesh’s population. India is seen both as an imperial aggressor and the protector of an authoritarian regime.

Worryingly, this feeling is becoming prevalent amongst the country’s youth, who have borne the brunt of Awami League’s excesses. They believe that India offers no benefit to Bangladesh – even as the relationship offers plenty of advantages Sheikh Hasina and her party.

Moreover, the widespread anti-Muslim, anti-Bangladeshi rhetoric of the Indian government are matters of concern, despite the Awami League’s best efforts to divert attention from these. Rather than presenting itself as a capable and conscientious regional leader, India risks confirming the far-right prejudices deeply embedded in Bangladeshi politics.

Now, however, there is a greater possibility for these sentiments to acquire much greater appeal in Bangladesh, primed for fiendish opportunists.

*This article was originally published by Scroll.in on 10 October 2019 and has been republished with the permission of the author.