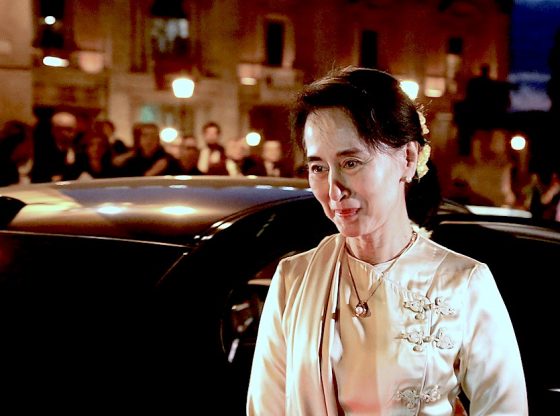 Image Credit: Not everyday you get to stand so close to one of your heroes… by Landersz; Licence: CC BY-NC 2.0.

Britain and Myanmar share a curious and erratic mutual affection, grounded in the problematic experiences of colonisation. They are hardly the best of friends, but still have plenty of common ground, language and history. As a British possession, absorbed in three waves of war and expansion in the nineteenth century, the country then known to the rest of the world as Burma was forced to offer up valuable resources carved out from its vast hinterland. This story of economic exploitation echoed loudly in the fight for Burma’s independence, which was finally achieved in 1948, and then through the xenophobic nationalism of the second half of the twentieth century.

Even today, the British are regularly singled out in Myanmar politics, most often as a scapegoat for current political, economic and cultural problems. To be British, in Myanmar, is to carry a mixed legacy. In her previous incarnation as a global icon for human rights and democratic virtues, the authoritarian government’s propaganda outlets regularly berated Aung San Suu Kyi for her disloyal affection for the British. It never helped that she was married to a British academic. Her comfort in the leafy, middle-class streets of north Oxford, first as an undergraduate and then as a young mother, was not forgotten, or forgiven, by her enemies.

Where other countries are prepared to accept flagrant human rights abuses as the price of engagement with Asia’s many semi-democracies, Britain has generally preferred to use its diplomatic and security muscle to offer principled, and usually very polite, criticism.

To partly compensate, much of the rest of the world, for a long time, delighted in Aung San Suu Kyi’s crisp pronunciation and steadfast, almost British, defiance of the megalomaniac military men. Few Myanmar people now speak English with such poise or confidence. Deliberate efforts to Burmanise the national curriculum, media and public institutions mean that, so many years after the British departed, there are only loose connections and muted reminders.

Yet the relationship between the United Kingdom and Myanmar is still relevant for both countries, in that it speaks to a shared, if painful, history and to the requirements to keep up globally meaningful partnerships. In the rhetoric, Brexit has only sharpened attention to such ‘global’ ambitions.  The large Myanmar diaspora in the UK gives the two countries a shared future too. Strong activist communities from across Myanmar’s political spectrum regularly make their voices heard. Students from Myanmar also often head for British institutions as the pinnacle of academic achievement.

At the political level, relations between Britain and Myanmar’s transitional governments were generally positive in the years from 2011 onwards. High-level visits were frequent. A former British diplomat even worked on Aung San Suu Kyi’s staff for three years, and she enjoyed close relations with key government and educational institutions in the UK. The University of Oxford, from which she graduated with a BA in 1967, opened a programme in Modern Burmese Studies and branded its top researchers in her honour. When David Cameron visited Myanmar in 2012, the two leaders made a happy couple. Aung San Suu Kyi saw him again at Downing Street in 2013.

Writing in The Myanmar Times during this period of post-colonial bonhomie, I suggested: ‘The current trends all look promising for Britain-Myanmar relations. Daw Aung San Suu Kyi’s personal affinity for Britain is shared by some other senior figures in the NLD [National League for Democracy]. History suggests that such mutual affection is a useful ingredient in foreign affairs.’ Such an overly rosy assessment failed to anticipate the considerable deterioration to follow. The Myanmar government’s campaign of violence against the Rohingya Muslim minority that escalated in mid-2017 has jolted the two countries apart.

Where other countries are prepared to accept flagrant human rights abuses as the price of engagement with Asia’s many semi-democracies, Britain has generally preferred to use its diplomatic and security muscle to offer principled, and usually very polite, criticism. In the wake of the anti-Rohingya campaign, which has now forced almost one million people from their homes in Rakhine State, the British government has offered firmer condemnation, including at the UN Security Council.

While the UK Foreign Office and Department for International Development (DFID) have made significant investments in their Myanmar development programmes and related analytical capabilities, the relationship between the two countries now suffers under the weight of disagreement about the future of the Rohingya. Such disagreement ensures that some of her old friends in London and Oxford condemn The Lady for her complicity. Since 2017, Aung San Suu Kyi has been stripped of numerous international awards and honours, including the Freedom of the City of Oxford.

After a visit to Rakhine State in September 2018, former British Foreign Secretary Jeremy Hunt explained that ‘what is essential now is that the perpetrators of any atrocities are brought to justice, because without that there can be no solution to the huge refugee problem’. Unwilling to accept accusations of serious human rights abuses, Myanmar has blocked international investigators. The government in Naypyitaw has made it clear that any issues will be dealt with by their own, notoriously self-serving, mechanisms of military accountability.

Up against this chorus of critical concern, voices in Myanmar blame the British for messing up the wider region’s cultural and economic foundations, and for making mistakes that keep Myanmar off-balance and in the spotlight for all the wrong reasons. For many Myanmar policy-makers, the problems caused by Rohingya settlement can be traced, in a direct line, to the policies and mismanagement of the former British Empire.

Mutual affection can only go so far whenever there is heated discussion of last century’s colonial pillage, this century’s ethnic cleansing, and all of the other unfinished business fuelling one of history’s longest hangovers.

Dr. Nicholas Farrelly is Associate Dean of the Australian National University’s College of Asia and the Pacific and a former Director of its Myanmar Research Centre. He holds an MPhil and DPhil from the University of Oxford. Dr Farrelly has researched Myanmar politics and society for almost two decades.

The Belt and Road Initiative and Xi Jinping’s foreign and domestic policy agenda
The end of funerals in China?