The end of funerals in China? 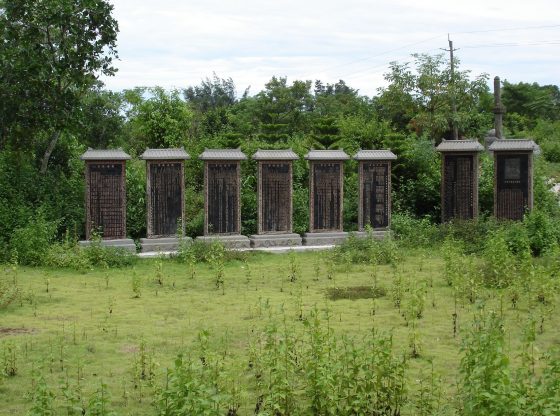 Written by Andrew B. Kipnis.

An official in charge of arranging funerals for a university once told me:

‘The party advocates thick care and thin funerals. The ideal would be no funerals, no cemeteries, no memorials. When a person dies, their bodies would be donated to medical research or to medical schools as cadavers to be practised on by medical students. Whatever parts were left over when the medical personnel finished would be cremated together. The ashes would be used to make bricks that would then be used for constructing buildings. The families of the deceased would be content with this result as they will have already demonstrated their filial piety by taking excellent care of the deceased when alive. Proper communists are materialists and do not worry about souls or the afterlife.’

For a Party that would like to have the ability to rewrite its own history at any time, having history carved into tombstones is inconvenient

While China is a long way from eliminating funerals and memorialisation, under President Xi Jinping restrictions on death ritual have been tightened in many ways. The slogan ‘thick care, thin funerals’ (houyang bozang) is reproduced in countless formats to emphasise that filial piety demands good care of the elderly but not extensive funerals. Concerns over saving land are used to justify bans on establishing new cemeteries in most parts of China. In rural areas where this is not yet the case, a shift from burials to cremations has been enforced.

Similarly, graves and even entire graveyards have been eradicated if they are seen as impeding urbanisation. There has been a reduction in the size of funerary plots for cremated remains in urban graveyards, and increasing pressure to use a columbarium for these remains instead of burial plots. Or, better yet, to scatter the ashes at sea, in a river, or in a memorial garden at which no gravestone, plaque or even nameplate is left.

Anti-superstition rhetoric is used to ban or discourage practices ranging from burning spirit money and setting off firecrackers to hiring musicians or religious specialists. Party cadres are required to reduce the size of their funerals and take the lead in holding ‘ecological’ funerals. Of course, there is great variation across China in terms of the tightness of these regulations and the lengths taken to enforce them, but overall the trend seems clear.

Why, then, the hostility towards funerals? Often it is justified with ecological rhetoric. Cemeteries waste land that could be used to grow crops. In this era of rapid urbanisation, every inch of agricultural land is valuable. Burning spirit money, moreover, pollutes the air, and Xi Jinping wants to build a green country.

Many cemeteries and funeral homes advocate giving flowers instead of burning spirit money at various points in the ritual process and make considerable profits from selling flowers. But growing flowers is now a big business in China, and it uses more land (formerly used for growing crops) than cemeteries. Cemeteries are often located on land that was not used for agriculture to begin with and are often full of trees, grass and shrubbery. They resemble parks. They neither waste agricultural land nor reduce the total amount of green space.

I suspect the hostility towards funerary ritual reflects the regime’s hostility towards all forms of public expression. Funerals are occasions for sometimes relatively large groups of people to gather in public and give eulogies about the life of the deceased. In both 1976 and 1989, large protest movements in Tiananmen Square were organised around the frame of mourning a deceased leader. On countless other occasions, smaller protests have erupted among those mourning what is perceived as a wrongful death.

Mourners protest against shoddy health care in hospitals, drivers who cover up their liability in traffic accidents, and many other forms of injustice that are seen as contributing to a death. Grief easily becomes grievance. Moreover, tombstones are a place where history of a sort is recorded. Those who died during the Cultural Revolution, for example, used to have small cemeteries all over the city of Chongqing. Most of these small cemeteries have been razed and the remaining one is fenced off to prevent people from photographing the old Cultural Revolution-era slogans engraved on the tombstones.

While no one today would dare to engrave a tombstone with anti-Party phrases, there is no guarantee that what might be seen as pro-party and patriotic today couldn’t become embarrassing in the future. For a Party that would like to have the ability to rewrite its own history at any time, having history carved into tombstones is inconvenient. In short, funerary ritual and cemetery tombstones are like any other form of media in China today. Like classroom lectures, academic presentations, newspapers, internet forums, television and film, they must be tightly controlled.

Andrew B. Kipnis is a Professor in the Department of Anthropology of The Chinese University of Hong Kong.