The effects of tourism on animal welfare in Asia 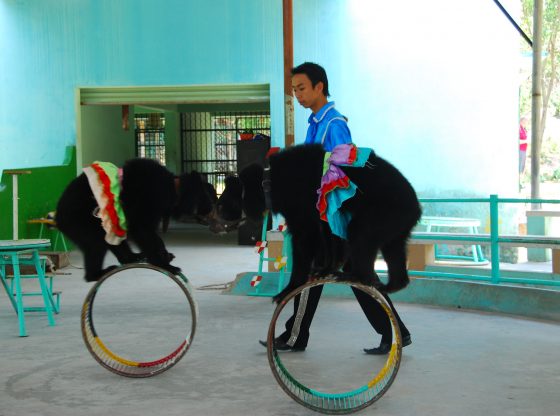 Scholars estimate that there are 120 billion animals that are used annually in the major animal sectors (e.g. research laboratories and factory farming) whose welfare is affected by human actions.

Millions of animals are used annually in the tourism industry as captives for display and entertainment in zoos, aquaria and other environments. They are used as porters and carriers, as a quarry to be hunted and fished, and for the purposes of competition and sport. A basic search of online media sources provides plenty of detail around the welfare concerns of animals used for tourism and entertainment in places like Nha Trang in Vietnam, Jeju Island in Korea, and Namuang Safari Park in Thailand.

While there is a large volume of academic work on the welfare of animals involved in the major animal sectors, there is much less work on animals used for entertainment and even less which focuses on the tourism field more specifically.

This is confirmed by an examination of the proceedings of the first global conference on animal welfare held by the World Organisation for Animal Health (OIE) in Paris in 2004. Tourism was not once mentioned in over 300 pages of research on global animal welfare issues. Nor was tourism a topic for discussion at the second meeting in Cairo in 2008.

Animal welfare is a family of perspectives that deal with scientific and moral questions regarding the use of animals. Minimally, it has been defined as ‘the state of an animal as regards its attempts to cope with its environment’, and it is typically measured on a scale of very poor to very good.

Implicit in the animal welfare discourse is the assumption that it is morally acceptable to sacrifice the interests of animals for the benefit of humans. There can be concern over the quality of animals’ lives, but not over whether animals should be used by humans. As such, if animals are doing well – i.e. they are well fed, free of pain and hunger, have proper housing, etc. – then humans are fulfilling their obligations to animals.

The principal concern, therefore, is that we should not use these animals badly in the lab, on the farm, in zoos, or in any other endeavours. This is because in some cultures people do not take it well if animals are used badly.

For example, Members of the European Parliament (MEPs) receive more letters on the topic of animal welfare than on any other issue. In addition, there is a direct correlation between the level of public concern and exposure to animal issues through the media. However, not all cultures are the same as regards their sympathies or sensitivities towards the use of animals.

In an effort to move the animal welfare agenda forward in tourism, a whole series of new transdisciplinary perspectives needs to be developed regarding practices which used to be acceptable in the past but which are now considered outdated. Some scholars are in the process of developing animal welfare measures that tourists can use to determine easily if an animal is suitable for use (e.g. riding or carrying) or not.

Part of my research, together with Dr Val Sheppard, involves developing an animal justice perspective that is based on different degrees of use which can be categorised along a continuum from deep justice, intermediate justice and shallow justice to no justice.

For example, Deep Justice takes place when animals are wild, free and not directly manipulated or controlled by human interests (e.g. ecotourism). An excellent example of Intermediate Justice is Lek Chailert’s Elephant Nature Park, where elephants that have been abused are taken care of in one of the world’s great animal sanctuary success stories.

No Justice, by contrast, emphasises situations where the ownership, domination and control of animals are central, and where respect, sympathy, autonomy and dignity are universally denied. Animals are kept in conditions and using measures that are entirely insufficient regarding their physiological and psychological needs, with entertainment and commerce as the overriding concern. The examples above of Nha Trang, Jeju Island and the Namuang Safari Park fall into this category.

The world’s largest tourism organisations have a leadership role to play in sanctioning what is right and wrong in relation to animal tourism. Online rating systems have become an important vehicle for tourists who are dissatisfied with their experience.

We might therefore assume that Namuang Safari Park would be motivated to remediate the consistently reported inhumane treatment of animals at its safari park over almost a decade because of its poor TripAdvisor rating (2.5 out of 5 stars). However, this park appears uninterested in service recovery, as long as tourists continue to patronise its business.

Furthermore, governments and international organisations must also take responsibility for instigating change. I argue that leadership organisations like the United Nations World Tourism Organisation (UNWTO) have a vital role to play in moving the tourism and animal welfare agenda forward in order to make tourism truly responsible and sustainable.

I recommend the addition of an Article 11 to the UNWTO’s Global Code of Ethics (which currently has 10 articles), based on the needs and interests of animals drawn into the tourism industry at every level.

Finally, it should be stated that animal welfare is just one of many different theories and approaches to animal ethics – the one that is the most moderate! Animal rights activists, for example, argue that on the basis of inherent value, animals should not be used or owned at all.

Other theories contend that our treatment of animals may be judged to be right or wrong according to how such treatment either catalyses or constrains an animal’s ability to flourish. Sentient beings – such as animals – ought to have the opportunity to experience a life of dignity and they should be extended due respect in a way that parallels how animals want to live. Still others – utilitarians – believe that interests like suffering and pain do not depend on whose interest is being considered. According to them, the like suffering of one being (human) must be counted equally against the like suffering of another being (non-human animal).

In the end, those of us working in tourism need to strive for better research, policy and practice and – most of all – education in the field. The simple fact of the matter is that at present we are not doing well enough. And we need to do this together – and now – given that global tourism is growing by about 6 per cent a year. And because animals are being challenged in so many different ways today: from habitat loss, human population growth, pollution and overharvesting.

David A. Fennell is a Professor at Brock University in Canada and is Editor-in-Chief of the Journal of Ecotourism.

The indistinct cartelisation of regional politics in India
China in the world: Political goals, commercial clout and recent trends