The same dart trick: A posthuman perspective on tourism in Thailand 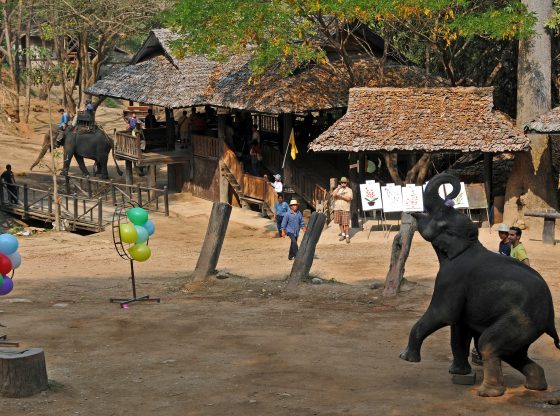 The exploitation of animals and women in Thailand’s tourism industry is both disturbing and disturbingly similar. Thailand is a major tourist site well known for its pristine white sand beaches, ancient temples and fresh food. However, these attractions are overshadowed by tourist experiences centred on the sex industry and animal abuse.

We conducted a critical content analysis to analyse information presented on official government websites, blog sites, web pages and Google web and image searches related to Thailand tourism. This methodological approach assisted our posthuman feminist analysis centred on the argument that there are parallel constructions of animal and female Others in Thailand as objects of consumption.

Our work supports a growing concern regarding the treatment and representation of animals in tourism; particularly the role of the elephant in Thailand’s tourism industry. By making links between the exploitation and abuse of women and animals, we theorise that tourism acts as a vehicle through which patriarchal ideals are mobilised and enforced upon performers through the tourist gaze.

The most illustrative example demonstrating a link between the oppression of animals and women in Thailand is the tourist performance known as the dart trick. In this performance, the female sex worker at a bar shoots darts out of her vagina which fly through the air and pop balloons. Elephants also perform a dart trick by using their trunks to throw darts at balloons.

The same dart trick is performed by both animals and women, thus suggesting that these ‘entertainers’ are similarly positioned to fulfil the desires of the all-pervasive tourist gaze. We play on the word ‘trick’ here as both a term referring to an act to entertain and amuse (often related to what animals can be taught to do), and ‘trick’ in slang relating to the act of prostitution.

The dart as symbol of patriarchal dominance

The instruments used in such tricks, i.e. darts, embody gendered connotations. We argue that the dart denotes male penetration, as the elephants have been tortured by being stabbed and both women and animals are forced to throw darts when in a submissive state. The dart projects through the air and bursts the balloons with ejaculation-like symbolism. The woman is instrumental to the dart as the medium through which the dart/phallus obtains its status and climax. Women and elephants in Thailand are made to fulfil their role; pleasing the tourist through submissive and degrading performances.

Internet sites show that tourists enjoy having their photo taken with the animals and women. In online images it is evident that the women are young, beautiful and often appear intoxicated. Contrastingly, the tourist is white, elderly, male and smiling – posing for their photograph with the intention to ‘brag’ about their experiences upon returning home.

In another example, drunken young men are shown grasping the trunk of a baby elephant. These images become trophies and souvenirs for tourists who demonstrate their consumption of female and animal Others while on holiday. The dart trick performed by women may appear to be more demeaning, but because of the training involved for the elephant we argue that the suffering is intense for both.

The subduing of the elephant body is carried out in a torturous process known as ‘the crush’, which is intended to break an elephant’s spirit so that the elephant is forced into a state of submission and fear throughout its life. This practice enables elephants to then be used as tourist attractions, and many tourists see animal encounters as an acceptable part of their Thailand experience.

Natural elephant behaviour does not include throwing darts at balloons as a tourist spectacle; they are forced to enact such degrading tricks through fear and domination. The contested nature of reactions to such tourist elephant shows is evident in the comments section of a YouTube clip:

‘Who cares about the elephant’s welfare, I want to see some fucking elephants throwing darts!’

‘I don’t find throwing darts that tortuous, the elephant should be glad it’s even allowed to play darts.’

‘I would take pleasure in putting you through the same torture that elephant went through.’

There has to be some critique of the moral position claimed by one contributor on Trip Advisor who said about a Bangkok Elephant Theme show: ‘This is a great show – you have to put your morals down by a little and think “when in Rome …” and so forth. If you like elephants, this is the place to be’.

This ‘setting aside’ of moral considerations, and also the ironic conception of how you treat animals you ‘like’, seems to permeate the tourist experience in Thailand. A Tourism Concern blogger describes the challenge for ‘adventurous’ and ‘animal lover’ tourists not to fall into the ‘traps’ of exploiting animals when travelling overseas. Tourists are urged to make a pledge to ‘end the exploitation of wildlife and promise not to visit attractions that use wild animals for entertainment’.

While we have focused on ‘the same dart trick’ we know that exploitation in Thailand is not confined to women and elephants. In our analysis we do not want to reinscribe women or animals as victims but rather pay tribute to them as (sometime) survivors in desperate circumstances. We advocate for places like Thailand to become ethical tourist destinations and urge tourists to take note of the warnings that are clearly available to them online.

When tourists support activities like the dart trick they show a blatant disregard for Others. We acknowledge that negotiating tourism contexts is ethically challenging and that many tourists are averse to abusive practices. From a posthuman feminist perspective, we suggest that tourists might consider Donna Haraway’s contention to take ‘response-ability’ for what they see, buy and do, despite being on holiday.

Dr Kate Bone works as a Lecturer at Massey University in New Zealand. She engages critical approaches to investigate issues of social justice related to tourism as well as organisation studies.

Dr Jane Bone works as a Senior Lecturer at Monash University in Australia. She uses innovative research methodologies and is especially interested in animal-human relationships.

**This article is based on the following work: