Sri Lanka’s Tamils are faced with a Catch-22 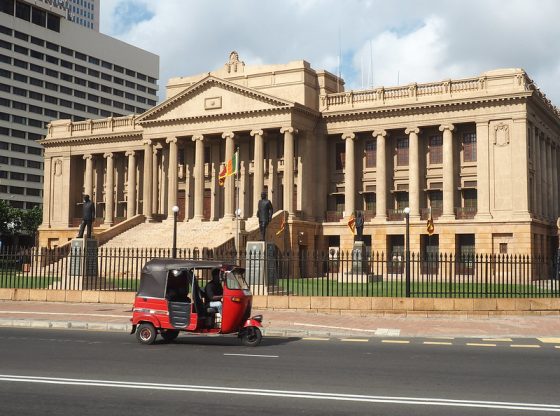 On 16 November 2019, Sri Lankans will head to the polls to elect their new president. But for Sri Lanka’s Tamils, the choice between the two candidates rings hollow. Sajith Premadasa has been framed by some as Sri Lanka’s ‘last hope’, a liberal bastion who will stand fast against the cronyism of the Rajapaksa regime. A bulwark against an ocean of fascism. What is largely forgotten, however, is why Sajith is a credible candidate in the first place: namely, because he is a ‘true son of the soil’ and is dedicated to ensuring that ‘terrorism will be totally eliminated’.

If Tamils boycott this election, this may lead to a victory for Gotabaya Rajapaksa

A climate of fear

Fear has always played a pivotal role in Sri Lanka’s elections: fear of terrorism, fear of foreign incursions, fear of difference. In the aftermath of the Easter Sunday bombings on 21 April 2019, in which over 250 innocent civilians were killed, fear remains a potent force. Politicians were quick to identify the bombing as a failure caused by ‘weakened’ national security and have called for an increased military presence, greater surveillance (particularly of ‘problem minorities’), and decreased scrutiny of the armed forces.

Sajith Premadasa is no different in this respect. He called for the implementation of the death penalty for ‘terrorists’, insisted on the need to collect information ‘from individuals in all communities’, pledged to inflate the already bloated military and intelligence services, and vowed to appoint the alleged war criminal, Sarath Fonseka, as the head of national security.

That is the same Fonseka who has been credibly accused of overseeing the Sri Lankan units that bombed hospitals during Sri Lanka’s civil war, executed and tortured those who surrendered, and were responsible for the enforced disappearance of civilians in addition to a litany of human rights abuses against Tamil civilians and militants in 2009. Sri Lanka’s image has already been tarnished internationally by a United Nations (UN) ban on non-essential troops being deployed on peace-keeping missions, following the appointment of Shavendra Silva as head of the military.

Gotabaya Rajapaksa, the other presidential candidate who as former defence secretary oversaw the massacres of 2009, is likewise notorious for his authoritarianism. He has gained infamy for the extrajudicial manner in which he has silenced critics of the government and army, most notably through ‘white van’ abductions, which would take away suspected rebels and dissident journalists if they were considered too critical. Some of those abducted were later released, but others were never seen again.

In the run-up to this election, Gotabaya has openly disavowed the UN resolution on accountability, laughed off accusations of white van abductions and enforced disappearances, vowed to increase military intelligence, and rejected all demands by the coalition of Tamil political parties.

Gotabaya’s rejection of accountability comes at a time where the very idea of the military being held to account is farcical. Recently, a Sri Lankan court decided to acquit four soldiers over the gang rape of a Tamil woman, after they had been found guilty and sentenced for the crime in 2015. It should also be noted that Gotabaya’s campaign has received a significant boost following two sets of arrests of alleged former cadres of the separatist organisation The Liberation Tigers of Tamil Eelam (LTTE) on 14 October 2019; one group in northern Sri Lanka and another in Malaysia.

In a piece for the Hindu, R.K. Radhakrishnan notes:

‘Although there has been no terror incident involving the Tamils in Sri Lanka since the conclusion of the war between the Sri Lankan state and the Tamil Tigers in 2009, the LTTE bogey is always raised by the Sinhala-majority political parties ahead of an election. It is no different for the presidential election to be held on November 16’.

On 30 September 2019, S. Sritharan, a Killinochi Member of Parliament (MP) for the Tamil National Alliance (TNA), declared that there was ‘no choice but to boycott the election’. Whilst Sajith Premadasa has paid lip service to the idea of devolution for Tamils, this has been met with scepticism by the Tamils themselves. Hence Sritharan asks:

‘Why can’t he spell it out and give it to us in writing? How can we commit our people to him in the absence of any concrete assurances?’

Any illusion that Sajith may be willing to concede to Tamil demands was lost when he made appeals to hard-line nationalists during a speech in Moratuwa, maintaining that he would protect the ‘territorial integrity’ of Sri Lanka. He has also decried the need for an international investigation into war crimes. Karikalan S. Navaratnam notes: ‘Sajith’s mixed priorities and pious platitudes tend to falsify the positive image presented by the essayist. He appears to be an “evangelist” anointed as such by the saffron-robed Ayatollahs’.

Earlier this year, Sajith received an honorary title from the Sangha Council ‘in recognition of his service to the nation and the Buddha Sasana’. The fundamental truth here is that beyond the façade, he, like all Sri Lankan politicians, is vying for support from the majority Buddhist nationalist base. Sri Lanka is not a democracy, it is an ethnocracy. Navaratnam comments further:

‘Sajith’s most urgent priority is to construct 1125 Buddhist temples under the ‘Sasunata Aruna’ programme. Implementation has started and the work is in progress. Under the initial phase, 25 temples are [being] constructed in 25 districts. North-East districts are not immune to this invasion. Tamils have reason to fear that the venture is the tip of another iceberg’.

Yet for many Tamils, to claim that Sajith is the same as Gotabaya is to do him a disservice, since he has at least paid lip service to Tamil needs and does not have the same record of rampant corruption. Indeed, if there were to be a boycott, as happened in 2010, this would essentially give full licence to the authoritarian rule of Gotabaya.

So let us stop and think for a moment about the choice the Tamils were presented with in 2010: the choice between an army commander who had slaughtered their people and the president who gave him the order to do so.

Joseph Heller expressed this kind of dilemma as a Catch-22 in his eponymous novel:

‘There was only one catch and that was Catch-22, which specified that a concern for one’s safety in the face of dangers that were real and immediate was the process of a rational mind… Orr was crazy and could be grounded. All he had to do was ask; and as soon as he did, he would no longer be crazy and would have to fly more missions. Orr would be crazy to fly more missions and sane if he didn’t, but if he was sane, he had to fly them.’

Hence in the November elections, Sri Lanka’s Tamils also face a Catch-22. If they vote for Sajith Premadasa, it will seem in the eyes of the international community that they are participating in a democratic process and Sajith’s victory will be hailed as a triumph over fascism. The Tamils will, however, be giving licence to greater militarisation and the existence of a police state.

On the other hand, if Tamils boycott this election, this may lead to a victory for Gotabaya Rajapaksa, and whilst the indifferent international community will bemoan the outcome, they will lay the blame at the feet of the Tamils: ‘You have given licence to greater militarisation and the existence of a police state’, they will say.

‘Yossarian was moved very deeply by the absolute simplicity of this clause of Catch-22 and let out a respectful whistle.

‘It’s the best there is’, Doc Daneeka agreed.’

Viruben Nandakumar is a recent graduate from the London School of Economics (LSE), where he completed an MSc in Political Theory. He contributes to the online newspaper The Tamil Guardian and blogs at: https://virubenn.wordpress.com/.

The consequences of Sino-American rivalry for third countries: Poland and the 5G dilemma
India’s power consolidation in Jammu and Kashmir