Rethinking the food system to address hunger, health and social equality: Notes from the northeast of India 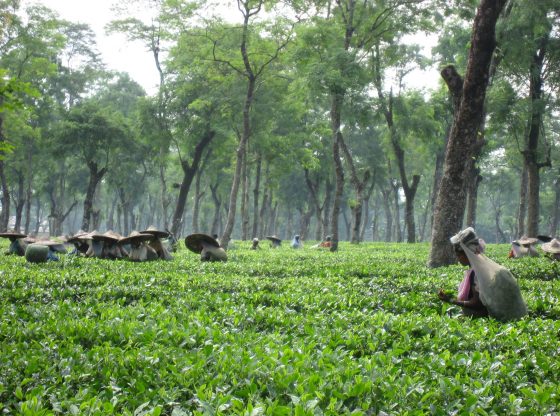 I recently spent time as a visiting researcher at the French National Institute for Agricultural Research (INRA), researching a project entitled ‘A Comparative Study of Organic Farming in Assam, India’. Working with the French model of organic farming – which emphasises how the formal strategies of Information and Communication Technology (ICT) and sustainable business management can be used to enhance the capacities of informal, indigenous local knowledge – revealed the importance of sharing anecdotes from the eastern world, where the indigenous communities have managed to preserve some of their unique traditions of sustainable agriculture. This situation may be somewhat short-lived, however, as these communities struggle to withstand the onslaught of conventional industrial agriculture.

It should be noted that in Assam, conventional industrial agriculture only penetrated into the region through the colonial capitalism of the tea industry. Food crops were fortunately not tampered with, and communities were allowed to carry on with their traditional practices. However, this is not to say that the scourge of industrial agriculture and tea production did not have an impact on the local ecosystem, biodiversity and livelihood patterns, due to the indiscriminate use of chemical fertilisers for mass production.

Thus, despite the large-scale degradation of soil quality, water, and human health, what can still be salvaged in Assam is the probably invaluable indigenous knowledge of sustainable agricultural practices among the indigenous communities. This knowledge covers all aspects of agriculture, from flood control and management to bio fertilisers and pest control, and from multi-cropping and seed preservation to food storage, livelihood support and local food security.

It is remarkable that most of the indigenous communities inhabiting this region have been self-sustaining in terms of their social structure and economy. Death by starvation is unheard of, and common property resources are regulated through customary laws that ensure equity, intergenerational stability and, to some extent, gender equality.

The traditional and popular paradigm of sustainable agriculture in India is one of organic agricultural practices, as promoted for example within the wider traditions of Hinduism and its grand narrative in texts such as the Vrikshayurveda (a text about Indian plant science) and in the practice of agnihotra yajna (worshipping God by burning fire with milk and clarified butter [ghee]). Yet the ‘little traditions’ of the indigenous folk cultures, such as those who inhabit the peripheries of Northeast India, often go unnoticed because of the lack of proper documentation and research in these areas.

There is a great impetus in this region to go organic, given the potential for organic farming and the growing market of citizens seeking the production of ‘clean and pure food’. Hence there is undoubtedly enormous potential for the region, given that it is not even half as polluted as other parts of India that went in for intensive agriculture during the Green Revolution (such as the Punjab and Bengal). Learning from the price that was paid under the Green Revolution in terms of adverse health impacts and the pollution of natural resources, the current agenda is to move towards an ‘evergreen’ revolution, with the full support of the government.

Regions like the northeast of India, being the last frontier in India’s post-development planning, eagerly await this new focus. But are they ready for it? As Guy Dauncey – an eco-futurist based in Canada – points out, the first step should be a government-commissioned study. The haphazard adoption of organic farming will not only jeopardise the ethical component of going organic, but it will also uproot and destabilise the prospects for agro-ecology in one of the most deserving regions of the world.

At present, a number of unorganised endeavours focusing on organic farming are being undertaken by private entrepreneurs and local farmers. However, in the absence of any wider awareness or a commitment to organic food, with a lack of coordination and networking between farmers and consumers, and without adequate community and institutional support for farms to be self-sustaining in terms of seeds, storage, marketing and brand building, it is unlikely that organic farming in Assam – or in Northeast India more broadly – will ever see the dawn of success.

In fact, even when industrial manufacturing backed by large corporations has tried to transition to sustainable practices, it has found itself bitterly thrown aside. For example, in Assam in 2006–7, the Dhekiajuli Tea Estate (tea garden) (owned by Parry Agro Industries Ltd, a corporate conglomerate) undertook an experiment to implement sustainable agricultural practices in relation to tea cultivation and production. The initiative was undertaken by the local management primarily to address the hazardous impact of toxicity in the local environment, particularly soil and water quality. The impact on the health of the resident labour population had made the management team sit up and take notice when they found a significant rise in the number of lung diseases, skin infections and birth deformities among workers and their children.

I first visited the tea garden in 2007 to conduct fieldwork with my students from the Indian Institute of Technology (IIT)–Guwahati, who had registered for my course ‘Concepts and Ideologies in Social Life’, where sustainability and sustainable development as a conceptual paradigm from a sociological perspective were explored. The experience was a positive one for us, and the optimism of the management team and workers was contagious and motivating for the young technocrats of future India.

The management were committed to a market-driven, competitive industrial manufacturing process, but they steered their motivation with a parallel experiment in vermi-compost, agnihotra yajna, panchgavya (cow patties) and amrit pani (fermented cow dung), which generates about 250 kinds of beneficial bacteria, along with other localised and organic pest control and fertiliser techniques to promote sustainable industrial growth with a low chemical impact.

Sources of indigenous knowledge such as the Vrikshayurveda were systematically explored to unearth traditional organic practices in farming and agriculture. The cultural worldview of environmental sustainability embedded in our traditional knowledge about agricultural practices and farming is elaborated in the Vrikshayurveda’s glorification of trees and tree planting. Every possible topic connected with the science of plant life – such as the procuring, preserving, and treating of seeds before planting, preparing pits for planting saplings, soil selection, methods of watering, nourishment and fertilisers, plant diseases and plant protection against internal and external diseases, garden design, agricultural and horticultural wonders, groundwater resources, etc. – finds a place in this text.

The tea garden management team were eventually forced to abandon their grand project as an unfulfilled legacy, succumbing to the formidable forces which drive our unsustainable existence. In spite of the significant progress made towards environmental and labour health as well as improving the quality of natural capital in the form of land, water and soil (which had started to show low toxin levels and chemical content, meaning it was highly polluted), the Dhekiajuli Tea Estate abandoned the experiment in 2014. It seems that the embedded externalised costs of poor health, environmental degradation and toxic waste generation are seldom reflected in the company’s balance sheet. Consequently, the transition towards a new paradigm of sustainable industrialisation in tea manufacturing was seen as a failure in terms of production costs and output.

The situation is even worse in the case of unorganised farmers who live in rural areas for whom agriculture is from the outset economically unviable due to the small landholdings and lack of infrastructural support. Moreover, the rather inferior value attached to manual labour makes farming a very low-prestige profession, which the emerging educated middle classes are loath to associate themselves with.

The push factors of emerging urbanisation have made rural India – and all its associated riders of village life and farming as a livelihood option – unattractive to Indian youth. This is a dangerous trend for emerging economies: the centrifugal forces of urbanisation are playing havoc with the balance of local development in rural India and the preservation of its ‘little traditions’.

In fact, what is happening is even more dangerous than this: booming ICT, satellite television, mobile networks and the internet are bringing the global society over the threshold of village society and into rural homes, but this comes at the cost of a great loss in the self-esteem of rural India as it finds itself dispossessed of its sustainable heritage, including organic farming and sustainable food cultivation.

Sujata Dutta Hazarika is a sociologist and the founder of the Global Initiative for Sustainable Development and Planning (GISDP).

Balancing culture, ecology and livelihoods with indigenous Indonesian weavers
The need for better protection and enhancement of the rights of the Indigenous Peoples in Cambodia