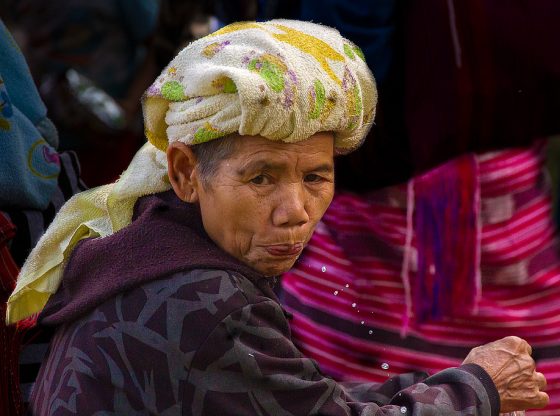 On the other hand, however, none of Thailand’s previous constitutions (and there have been many) or any piece of Thai legislation either recognises or even mentions ‘Indigenous Peoples’, or chon phao pheun muang in Thai. It is recognised that there are people from ‘ethnic groups’ (chattiphan) in Thailand, but without distinguishing them in terms of rights and responsibilities.

Thailand is a good example of a nation where a large number of people self-recognise as being Indigenous People, even when the government does not extend this recognition to them.

So how is it possible that Thailand can be a signatory to UNDRIP when it does not recognise Indigenous Peoples in Thailand? The reason is actually not so surprising –  especially if the broader Asian context is considered – as Thailand has applied a particular understanding to ethnic minorities that has become broadly known as the ‘salt-water theory’, a position also adopted by many other governments in Asia.

Indeed, the Thai position reflects the official position of most governments in the region, and there are only a few Asian governments which explicitly recognise the existence of ‘Indigenous Peoples’ in their countries, namely, the Philippines, Cambodia, Taiwan, Japan and Nepal.

Some countries have quite different ways of thinking about ethnic minorities. For example, the People’s Republic of China (PRC) recognises ‘Ethnic Nationalities’, and while India recognises ‘Scheduled Tribes’ or ‘adivasi’ (original inhabitants), it has officially refused to apply the concept of ‘Indigenous Peoples’. In Indonesia, the term ‘Indigenous Peoples’ is not recognised by the state, but the idea of ‘adat’ or ‘customary law’ is well established.

This scenario is therefore relevant for considering the United States and Canada as well as Central and South America. It also applies to Australia and New Zealand. All these places have experienced large-scale European settler colonialism, to the extent that the original inhabitants of the land now make up a small minority of the populations of these countries. However, it is argued by many that in Asia the concept of Indigenous Peoples is not relevant, since the vast majority of people living in Asia are Asians because settler colonialism from Europe was much less prevalent in Asia than in the Americas, Australia or New Zealand.

In other words, many Asian governments have taken the position that because the people within their territories are almost all of Asian descent, the concept of Indigenous Peoples is irrelevant and does not apply to Asia: either everyone is considered to be Indigenous, or everyone is considered not to be Indigenous, thus rendering the term irrelevant in the Asian context. It only matters when settler colonialism occurs across ‘salt-water’ oceans (hence the salt-water theory). Consequently, successive governments in Thailand argue that they do support the concept of Indigenous Peoples; just not in Thailand. However, many citizens of Thailand disagree.

There is no doubt that state recognition is crucial for bringing about widespread recognition of particular political concepts, including the concept of Indigenous Peoples. However, Thailand is a good example of a nation where a large number of people self-recognise as being Indigenous People, even when the government does not extend this recognition to them.

Indeed, Prasit Leepreecha, an ethnic Hmong scholar and activist who himself has come to identify as being Indigenous, wrote in an article published in the Journal of Southeast Asian Studies in 2019 that: ‘Becoming Indigenous Peoples in Thailand…is not only about deterritorialising the state and imposing academic discourses upon the Indigenous movement, but it is also about persisting with a minoritarian positionality through applying the idea of indigeneity, and with demanding that basic rights be recognised.’ He points out that ideas associated with indigeneity are not only circulated through state structures but also via other means, such as through Indigenous groups themselves, the media, and particular individual government officials and state agencies.

Illustrative of the partial ways that this has played out in Thailand, the Thai government did establish in 2010 ‘Special Culture Zones’ in particular provinces for the Moken (sea gypsies) and Pwakanyaw (Karen) peoples in order to protect their cultures. The language of ‘Indigenous Peoples’ was not evoked, but elements of self-determination and sovereignty were revealed through these cabinet-level orders, although implementation has not been easy.

In 2007, the Network of Indigenous Peoples of Thailand (NIPT) was established, marking the first time that the term ‘Indigenous Peoples’ had been used explicitly in the name of a nationally controlled Thai civil society organisation. The naming occurred just over a month after the International Day of the World’s Indigenous Peoples was first celebrated in Thailand in the grounds of Chiang Mai University, and since then this day has been marked annually by different groups in the country. Indeed, some state agencies have supported the idea of indigeneity in Thailand, such as the Ethnic Affairs Institute under the Ministry of Social Development and Human Security.

Dr. Ian G. Baird is an Associate Professor in the Department of Geography at the University of Wisconsin-Madison. He is currently the Director of the Centre for Southeast Asian Studies (CSEAS) at UW-Madison, and specialises in the study of Laos, Thailand and northeastern Cambodia. He is available at ibaird@wisc.edu.

Indigeneity and religion in the Mentawai Islands
Reason to be hopeful: When ‘The Legend of 1900’ overtakes ‘Charlie’s Angels’ in China