Chasing the Dragon: Attraction and Dependency in UK-China Relations 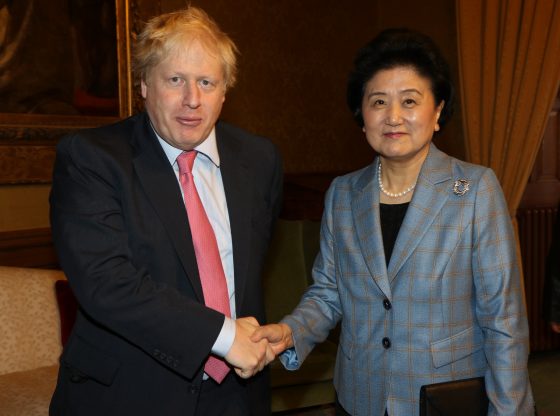 Image Credit: Vice Premier of the People’s Republic of China by Foreign and Commonwealth Office/Flickr, License: CC BY 2.0.

Having strong UK-China relations has featured prominently in elite narratives in the aftermath of the 2016 referendum result to leave the European Union (EU). With London looking to secure new free trade agreements (FTAs), enshrining a closer – in particular economic – relationship with Asia’s most powerful entity has become a core diplomatic aim of Britain’s leaders. Given the world-leading import and export clout that Beijing now has in the global economy, obtaining a UK-China FTA has gained the allure of an omnipotent elixir that will serve to simultaneously revive the UK domestically after a near-decade of austerity and also re-assert the UK internationally. As Boris Johnson noted in July 2019, ‘free trade … has done more than anything else to lift billions out of poverty … (and will help) recover our natural and historic role as an enterprising, outward-looking and truly global Britain’.

Optimism for achieving this holy grail for a post-Brexit Britain stems from the so-called “golden era” ushered in by Chinese President Xi Jinping’s UK visit in October 2015. Major Chinese investments fuelled this enthusiasm and targeted major British companies and Premier League football clubs, as well as UK infrastructure from airports, London skyscrapers, 5G telecommunication networks, nuclear power plants and railways lines. The latter linked the UK to China’s “Belt and Road Initiative”, which was further bolstered by London’s willingness to be a founder-member of the Beijing-instigated Asian Infrastructure Investment Bank. Back in 2017, these ties made China the UK’s sixth-largest trading partner, accounting for 4.8% of all UK trade behind the US, Germany, France, Netherlands and Ireland. In turn, in 2018 the UK was China’s ninth-largest trading partner, accounting for 2.3% of all its trade.

The UK also offers much to the Chinese market, with UK exports and the country’s well-established strengths in healthcare, banking, education, insurance and financial services all being attractive to China’s ever-expanding middle class. In early 2018, trade deals worth over £9 billion were signed during then Prime Minister Theresa May’s visit to China which appeared to pave the way for closer ties, although they were considerably less than the £40 billion secured during Xi’s 2015 visit. Year on year, trade has risen from £54.7 billion in 2015, to £59.2 billion in 2016, to £65.4 billion in 2017, to £67.3 billion in 2018. Britain has also been the leading recipient of Chinese FDI into the EU from 2000 to 2018 totalling €46.4 billion (ahead of Germany on €22.2 billion and then France on €14.3 billion), which was significantly aided by the heavy depreciation of the pound after the 2016 referendum.

Despite these positive notes, more negative portents now pervade UK-China relations. Although they are both P5 powers, with any closer relationship allowing Beijing to benefit from London’s substantial soft power resources on the international stage, as well as working together as peacekeepers in South Sudan and against Ebola in West Africa, there is a growing asymmetry between the two sides. This disparity has witnessed a role reversal in their international standing, with China’s economic size vastly outstripping the UK’s. While 25 years ago the UK economy was bigger than China’s, now – when measured in current US$s – the latter’s GDP was $13.61 trillion in 2018, nearly five times that of the UK’s $2.83 trillion. If compared in terms of GDP (PPP), in 2017 China’s economy was nearly eight times bigger at $23.21 trillion versus $2.93 trillion. Such inequalities give Beijing the upper hand in negotiations in that it has much more to leverage, and which makes it a bigger prize for the UK to gain.

More tellingly is that Brexit has consumed – and looks set to continue to consume – much of the UK’s diplomatic bandwidth. Despite the optimism voiced by many UK politicians, and regardless of whatever kind of Brexit finally materialises, the next few years will be taken up by negotiating the transition period and then any UK-EU FTA, with – as UK’s ex-EU negotiator Ivan Rogers recently noted – ‘“no escape from ball-achingly technical and lengthy negotiations”’. More seriously, the ongoing and often circular debate over the nature of Brexit has shown the lack of a coherent national strategy, as well as a weakened and inexperienced cadre of negotiators capable of securing a deal. Then Trade Secretary Liam Fox’s failure to secure trade deals with major international powers by early 2019 is indicative of these issues, and will again ensure that China negotiates from a position of clear strength.

More broadly, any UK-China FTA would rest upon other tacit concessions outside of economics. These could hypothetically include nullifying London’s ability to criticise Beijing concerning its human rights record, leaving the UK unable to counter China’s policies towards Hong Kong, Tibet or Xinjiang. Talks would also demand a sensitivity from UK leaders that has recently been absent; such as Gavin Williamson’s imperial overtures to China that led to the cancellation of trade talks in 2019 or Boris Johnson’s assertion in 2018 that what ‘we will do with the two new colossal aircraft carriers … is send them on a freedom of navigation operation [to the South China Sea]’. Repeating such rhetoric during any FTA negotiations would only inspire mistrust from Beijing and an immediate breakdown in talks.

Suspicion of China is also an issue, with a recent RUSI report about China’s interference in academia, think-tanks, the press and politics in the UK, noting that such efforts ‘represent a rigorous, ruthless advancement of China’s interests and values at the expense of those of the West’. From this basis, an FTA with China may not best serve the UK’s overall strategic interests. It must be hoped that our leaders after December 12 are not seduced by the short-term attraction of a trade deal only to find that its benefits are then irrevocably overshadowed by a weakening dependency in the long-term.

Reason to be hopeful: When ‘The Legend of 1900’ overtakes ‘Charlie’s Angels’ in China
British policy towards Hong Kong